The bush telegraph was busy.  It’s that time of year, and starlings are murmurating.  Spotted south of Ripon, they’d also been seen at Nosterfield, only a couple of miles from us.

Down at the nature reserve, just at sunset, cars gathered.  Their occupants waited, enjoying the spectacle of the nightly sunset.  Then most of the cars  just – went.  What did they know that we didn’t?  Then Malcolm spotted what we’d come to see, over there in the north.

Thousands upon thousands of starlings in a dense cloud that spread, re-gathered, swooped, dived and soared  like one of those unending computer-graphic screen savers that used to be all the rage. 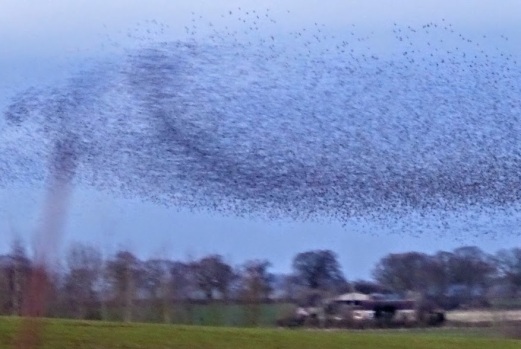 We left too,  We needed to be nearer.  And sure enough, there in a lay-by near Nosterfield village we re-grouped, our binoculars to the ready.  The starlings formed an immense cloud, sometimes dispersing to blend in with the grey cloud behind, sometimes wheeling together in sinuous black streaks of snake-like movement.  For half an hour we watched.

Then this impressive partnership of birds pulsed lower, then lower, then dropped out of sight.  They’d finished their performance for the night.

22 thoughts on “A murmuration of starlings”