This is turning into a Sunday Thing. Experimenting with different types of poetry. But with added photos. Always with added photos. This week, as my contribution to Tanka Tuesday‘s task – to write a 4-11 (the clue is in the name: 11 lines of 4 syllables each – last line repeats the first) I thought I’d focus on summer travel.

Worth it though – for

And to prove that travel’s always worth it, here’s my photo gallery. There’s just one problem. Most of these photos were taken in January, in February, in March … you get the idea – any month but August …

… Should have travelled by elephant …?

PS – the header photo was taken at l’Albufera, near Valencia, Spain. 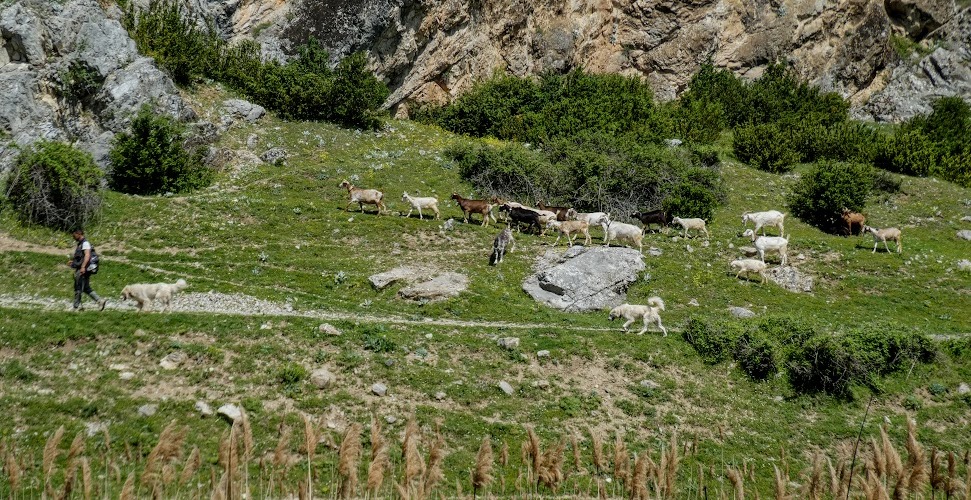 I know it’s not a Group of Goats. It’s a Flock; it’s a Herd; it’s a Drove (as in the header photo); it’s a Tribe. But Group is more alliterative.

On our Balkan journey, we got used in Albania to seeing shepherds wandering along the mountainsides with their mixed herds of sheep and goats.

In Greece though, we stayed on a small island, Agios Achillios, on Lake Prespa. Semi-nomadic practices weren’t an option. Instead the goats had to put up with lush and varied pasture on hillsides overlooking the lake, which they shared with their neighbours the pigs and the dwarf cattle of the area, and who may have their moment of fame another week.

Getting two images for the price of one. That’s this week’s Lens-Artist Challenge, hosted this week by Jez. I’m keen on seeing double like this.

Do I prefer a simple canalscape?

A few birds could add some interest …

… or just a peaceful scene by a river …

… which is where we started. The featured photo is from a boat on the River Guadalquivir in Seville.

With what joy we greeted the lizards we encountered on our recent Balkan Journey! How we miss the companions who shared our daily life in France, during the summer months, at least.

Here‘s what I wrote about them, ten whole years ago:

Summer’s arrived: well, this week anyway.  So from before breakfast until long after the evening meal we’re spending as much time as we can out in the garden.  And we have plenty of company.  Lizards.  Common wall lizards, podarcis muralis.  They are indeed spectacularly common here.  We have no idea exactly where they live, but there are plenty who call our garden ‘home’.  We’re beginning to get to know a few.

Easily the most identifiable is Ms. Forktail, she of the two tails.  She’s the only one we’ve been able to sex conclusively as well, because we caught her ‘in flagrante’ with Mr. Big behind the gas bottles recently.  And then the next day she was making eyes at a younger, lither specimen, and the day after that it was someone else.  She’s lowering the moral tone of our back yard.

Then there’s Longstump, who’s lost a tiny portion of tail, and Mr. Stumpy, who hasn’t got one at all, though it seems not to bother him.  Redthroat has a patch of crimson under her chin.  There are several youngsters who zip around with enthusiasm and incredible speed.

In fact they all divide their time between sitting motionless for many minutes on end, and suddenly accelerating, at top speed and usually for no apparent reason, from one end of the garden to the other, or vertically up the wall that supports our young wisteria. On hot days like this  (36 degrees and counting) they’ll seem to be waving at us.  Really they’re just cooling a foot, sizzled on the hot wood or concrete.  Sometimes you’ll see them chomping their way through some insect they’ve hunted, but often they’ll step carelessly and without interest over an ant or other miniature creepy-crawly in their path.

Mainly they ignore one another, but sometimes there are tussles.  These may end with an uneasy standoff, or with the two concerned knotted briefly together in what could scarcely be described as an act of love.

We could spend hours watching them, and sometimes we do.  But there is still a bathroom to build, a workroom to fit out, and a pergola to design.  The kings and queens of the yard have no such worries.  They can do anything: they choose not to.

These peacocks live in North Macedonia, where they have, uninvited but none the less welcome, taken up residence at the hotel we stayed at on the shores of Lake Ohrid, St. Naum. I think they can speak for themselves – as they did, very noisily, every morning.

The rear view proved just as interesting as that draped tail.

And now … a peacock in action. Not for nothing is one of its collective nouns an Ostentation of Peacocks.

I’ll be honest. I conceived and wrote this post as a Monday Portrait. But then Tina’s Lens-Artists Challenge dropped into my in-box: ‘The eyes have it’. I’m not entirely sure she had peacocks in mind, but the hundreds of ‘eyes’ that make up the peacock’s tail, and that slightly penetrating gaze displayed in that head shot allowed me to think I might get away with including this post in the challenge.

I wanted to be in the Monday Portrait from Prespa, but the birds got there first. Am I too late? It’s not Monday? Well, I’m here now …

Look, I got here as soon as I could … And now I’m here, you might wait till I’m properly in shot.

… I’ve had to overcome all kinds of difficulties …

But here I am, ready for my profile to be shown to best advantage.

And by the way: that feature photo. Those gnarled old olive stumps are quite my favourite spot.

Don’t take photos of us …

… or these pelicans. They’re too far away.

… You need a cormorant. But me, not him… 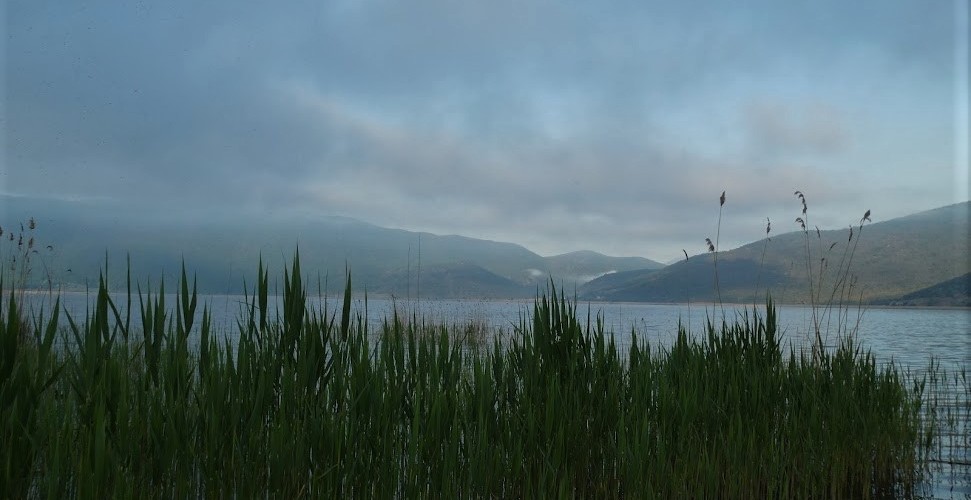 Last month, I introduced Lake Prespa, which has shores in Albania, North Macedonia and Greece. I told various tales, and there are more to come. But I haven’t given you the chance simply to enjoy it, as we did, in the early morning and evening, as the sun arrived and departed.

Most of these photos were taken on or near the island of Agios Achillios. 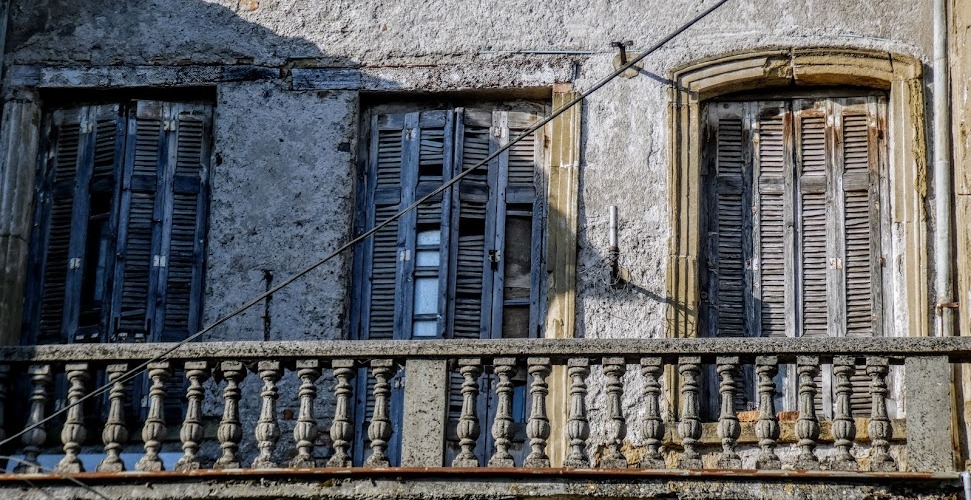 Korçë in Albania has been a Muslim town, an Orthodox Christian town, a Communist town; ethnically Aromanian, ethnically Greek, ethnically Albanian: variously under the rule or occupation of Ottomans, Greeks, French, Italians, Communists … and now Albanians. Its history is so complex and diverse that I don’t know where to start. So instead I’ll show you its old bazaar, now become a tourist area of restaurants and cafes; its 15th century mosque, and its Resurrection Orthodox Cathedral, built only in 1995, to replace the one destroyed in the Communist era.

Then we’ll mooch round the old town near where we stayed. This was a prosperous place during the later Ottoman period, but as its residents decamped to safer places, such as the United States during the early years of the twentieth century, the area became neglected. I hope this will change. These attractive houses set along cobbled streets (note the fossils in the cobbles!) are well worth saving.

I’d visit  Korçë again, for its easy charm, its appetising restaurants, its museums. I wish I could take you round the icon museum, The National Museum of Mediaeval Art, but photography was forbidden. Two days wasn’t enough to explore this town.

I think my header photo, from the old town, deserves a place in Ludwig’s Monday Window.

All over Thessaloniki, you’ll find little tableaux like this: a stray cat in a cat-hostel for one. A wooden fruit-box or similar, with a plump cushion. On it sleeps a cat. Next to it is another box, a covered one, just big enough to let the cat jump in when the weather’s poor. Alongside these are dishes of cat food and water.

Semi-feral cats are all over the place here. But many of them have benefactors providing food and shelter, and even more get daily doses of cat food, left on street corners and on doorsteps.