… my true love gave to me

We’re still in Barcelona you see. But we could be anywhere in Catalonia or Aragon. And we’re still with the scatological. Caga Tió  is a log. A log with special powers. He’s a poo log, who excretes presents. Children must look after him well before Christmas, feeding him with dried beans, bread or orange peel. But when the festival arrives, they must beat him, hard, until he produces their presents. Whilst beating him they might sing this song:

We’re leaving Christmas behind now. In Barcelona, and Spain generally, things are just hotting up. Tonight, the Three Kings will progress into town, and tomorrow, extended families will get together to exchange presents, in memory of those Wise Men who toiled over field and fountain, moor and mountain, following yonder star to bring gifts to the infant Jesus. (Well. It’s Covid Time. No more than 10 in a family group this year) 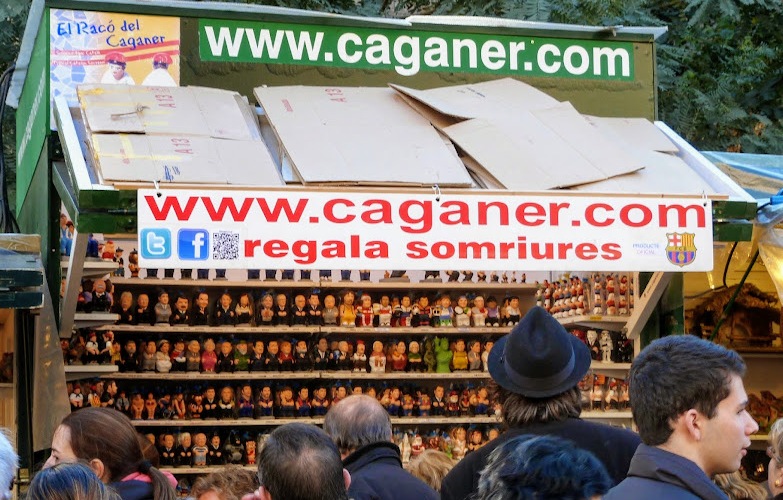 I only planned to tell you about the tenth day of Christmas, but Susan of London Senior took the view that I’d started, so I ought to finish too. So here we go: it’s a little rude, but don’t blame me …

If you visit Catalonia at Christmas time and take a look at any crib scene, there at the back, somewhere behind the infant Jesus will be a figurine – a caganer – squatting down doing A Big Job, a Number Two: choose your own euphemism. The message seems to be that we are all sisters and brothers under the skin: mighty or humble, rich or poor, old or young, we all have the same kinds of body – and bodily functions, so get over yourself and don’t give yourself airs and graces. All are Equal in the Sight of God.

These photos were taken a few years ago. The roll call of Those in Charge seems to have changed a bit – can you spot Gordon Brown here? But you’ll see someone you recognise, I’m sure.

On the eleventh day of Christmas, my true love gave to me

What a doddle it must be to erect a modern high-rise building, compared with the difficulties faced by those builders in mediaeval times. Their churches and cathedrals soar dizzyingly heavenwards without benefit of modern scaffolding kits, cranes and mechanical diggers.

It’s the view of Cádiz shown in the featured photo that prompted thoughts like these. The modern industrial hub is visible from the older city centre. Here’s another view:

Let’s go to London, a city so changed from the days when I lived there in the 1950s and 60s. Here’s a gallery of soaring towers, and the cranes that made building them possible. There are even cranes surrounding St. Paul’s Cathedral. And The London Eye makes a useful picture frame for yet another high-rise office.

And here’s new and old, juxtaposed: from Gherkin to Tower of London

Slightly off-topic, I have to include a few shots from the Gasholder development in Kings Cross. From dirty industrial back streets to desirable address in an imaginative few years.

There’s one cathedral still under construction that’s taking even longer to build than its mediaeval antecedents: La Sagrada Familia in Barcelona. Look.

Did you notice the builder in his hi-viz gear and safety equipment? He’s not the only one who needs to have a head for heights on these modern buildings. Here’s a team of window cleaners in Warsaw:

Tina has invited us, in this week’s Lens-Artists Challenge #173 to choose interesting architecture. I’ve chosen to focus on how the buildings I’ve selected reached such immense heights.

This shopping malarkey’s getting tiring, so this week, I’ll just slot in a few shots that didn’t make it into the previous two posts. Like the header shot, for instance. Who knew that facials, waxing, nails and massage were a prerequisite for returning to school?

The Yorkshire lass in me thoroughly approves of this window, spotted in Leeds.

And this image from Barcelona of a rather up-market grocer, Queviures, with the reflections of the street behind remains a favourite too.

My last one may not be a shop at all – I can’t remember. It comes from a more optimistic time, when we still believed that marching in London in our thousands, and community action might help to save us from the disaster which is Brexit. 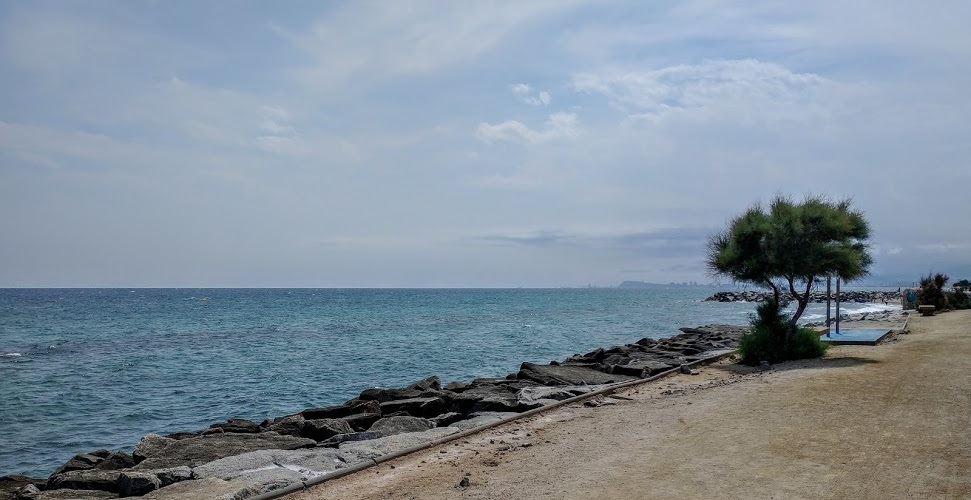 The railway line linking Barcelona to Mataró, 34 miles up the coast, was opened in 1847. The line divorced every town on its route, including Premià de Mar, from the seashore by hugging the coast. Nowadays a busy main road also runs alongside.

But the railway brought advantages too, by bringing raw materials (coal from England for the gasworks!) to agricultural and manufacturing industries, and by taking produce (fruit and vegetables, textiles) to their markets further afield.

Still, those early trains were regarded with deep suspicion, as evil and malevolent. Early travellers took no chances. They would make their wills before embarking on their journey. Market gardeners were convinced the smoke from the engines would harm the crops and they would become bankrupt. And steam engines require axle grease. Where could that fat come from? Weren’t there reports of babies and children going missing in Barcelona? Hmm?

Nowadays, this is the scene from the goods yard, now known as Descarroga beach – ‘decarrogar‘ is ‘to unload‘ in Catalan. The train line still exists, but silent electric rolling stock dependably transports commuters, but no freight, to and from Barcelona.

Local colour. We love it. Washing lines suspended from distressed peeling-paint window frames, or stretched across characterful ancient narrow streets oozing character and Instagram appeal. But life moves on. Families get rehoused into concrete-and-brick tower blocks. But Monday is still washing day. Exchange the battered wooden windows for ones made from metal and pvc, and atmospheric Old Town alleyways for Le Corbusier’s vertical cities – then stick the washing out anyway.

I haven’t joined in the Lens-Artists Photo Challenge in a while: I wouldn’t like to fall out of the habit completely. What to offer? A miscellany? Maybe. Focus on one country – maybe Spain with its wonderful Moorish past? Maybe, but others have already offered wonderful images on this theme. Barcelona then, my daughter’s home? OK, why not? But this time, maybe not its must-see architecture, from Gothic to Gaudí. Let’s just walk the streets, travel the metro, visit maritime Barcelona, and see what we can see.

About three years ago, we were in Sants, Barcelona. The flat where Emily and Miquel then lived was too small to accommodate us for too prolonged a stay, so an apartment in Sants it was – a part of the city we didn’t knw at all, but came to like a lot.

For us though, it was simply a busy working community, full of independent shops, a market, housing old and new. Let’s go and walk the streets for a while, and admire the often elegant windows. And as the feature photo shows, there’s washing. There’s always washing to hang out.

It’s an assertively independista part of the city: hence the Catalan flags and yellow ribbons. And they don’t welcome the destruction of their community by tourists that come and go. So we did our best to spend in neighbourhood shops bars and restaurants, and also hoped that, since we’re all-but Catalan in-laws now (and now, even Spanish grandparents), we might pass muster.

This time two years ago, we were in Barcelona. One of our ports of call was the first house Antoni Gaudí ever designed, Casa Vicens. Once a spacious site beyond the city limits, it’s now squashed into narrow city streets, some of its garden space sold off. But it’s definitely worth a visit, and you can have a virtual look round here.

What the official site won’t show you is the views from the windows, and one thing I enjoyed, as I always do, was the sight of the Monday washing drying on the balconies of nearby flats.

… work high up on the highest spires of La Sagrada Familia in Barcelona. The squares show one of these craftsmen doing his work, almost at the very top. The featured photo gives some idea of how Gaudí’s as yet unfinished cathedral towers high above the city.