I don’t know about you, but I need a break from the world and its vicissitudes.  And I’ve got just the thing.  One of our favourite walks, near Masham, near home.  It offers wetlands with waterbirds, calming pastures of sheep, woodland, a stretch along the riverside – all available in a four mile stroll.

This month, Jude of Travel Words invites us to consider Pattern.  This walk has plenty, starting with the skeins of geese often to be seen designing sinuous flight lines across the sky.

I’m going to show you a particular line of trees that I’m fond of, towards the end of the walk.  A repeated pattern, tree after tree after tree.  Sometimes, especially in high summer, these are enough to fill my mental screen.  At other times, I notice the pattern echoed.  A line of sheep, maybe.  A different line – of fencing.  Even – and I never manage to catch this in the same shot – a line of snagged sheep’s wool caught on nearby barbed wire.

I’ve chosen in many cases to echo the linear nature of the pattern by a spot of judicious cropping.

There.  Did you forget the headlines just for a few moments?

I was brought up on Any Questions, a topical radio debate programme which has been a firm part of the BBC Radio 4 schedules on Friday evenings for getting on for 70 years.  Our family always listened when I was younger, but I don’t these days as it does terrible things to my blood pressure when right-wing Daily Mail readers take to the podium.

All the same.  It was coming to Masham, the town-next-door.  A loose cohort of us got free tickets.  That’s not quite true.  Malcolm and I didn’t, but meeting in the pub beforehand, we started to feel left out, and managed to snaffle two late-returns.

You have to turn up easily an hour ahead of transmission. If you want to, you write a question which might get included. You have to be warmed up.  Radio Leeds presenter Andrew Edwards schooled us in the gentle art of clapping, cheering and booing to make our views clear to the listening audience (‘No heckling please’).  The lucky questioners were announced.  Two of our team made the cut, though in the end, only passionate 17-year-old ‘It’s our future’ Charlie had her question dealt with on air. I made the nearly-got-included list.

It was all fascinating stuff.  Star of the show was probably the CEO of Siemens UK, Jurgen Maier: measured, lively and likeable.  A Remainer, but desperate for business certainty, he’d back the current Brexit deal.  Leaver Jake Berry, Northern Powerhouse Minister, actually said  ‘I don’t think any of us knew what we were going to get when we voted Leave….’, but nevertheless isn’t in favour of a People’s Vote on the Final Deal which Lord Adonis is campaigning for.  There was Labour’s Shadow Brexit Minister, Jenny Chapman  and the other MP was John Redwood (‘fervent Brexiteer’).  He really is from the Dark Side.  Uncivil, dogmatic, he didn’t attract much enthusiasm even from those who subscribe to his reactionary, long-held views in favour of Leave.

If you want a flavour of the debate, you can listen here if you’re eligible to listen to BBC transmissions.

And the next day, we went back to Remoaning in Harrogate again…

We don’t often go walking in the evening.  But yesterday we did, and found ……. orchids – I only know the last one, the bee orchid, by name…..

…… inquisitive young calves huddled together: they thought we were scary ..

….. and best of all, this sheep.  Naughty thing, she’d escaped from her field, and was having a high old time eating the contents of this wheat field.  We told the farmer when we saw him later.  Was he bothered?  Not a lot.

I wonder if she left this wool behind? 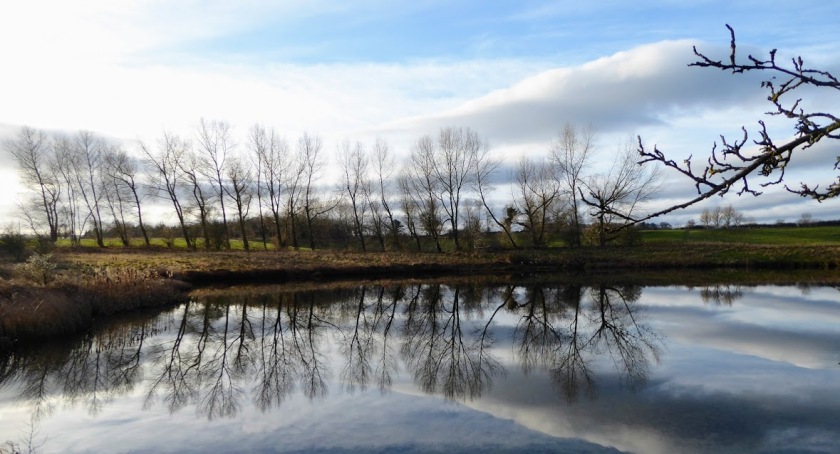 On Christmas day I posted a scene from our days living in the Ariège.  I felt very nostalgic for the Pyrenees, for snowy peaks silhouetted against clear blue skies, for cold clear air.

Today gave me the chance to remember that our countryside, though so very different, has its own charms and pleasures.  We walked from nearby Masham and past the gravel pits of Marfield, now home to water birds of every kind: though only Canada geese and a few proud swans got a look in this morning.

We passed stands of ancient oaks, saw stark lines of skeletal trees marching along the horizon, watched the sky turn from Pyreneen blue to moody grey and purple then back to cheerful blue again.  Sheep in late pregnancy cropped the short grass.  We stopped to chat with fellow walkers walking off a calorie-laden Christmas. The River Ure was never far away.  A pretty good morning’s work, actually. 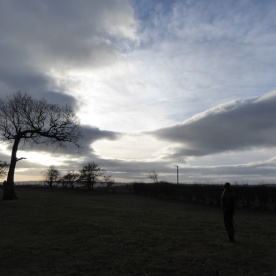 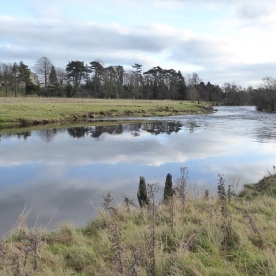 Back in England, it’s time to dust down our walking boots again.  As we stepped out today, on a beautifully fresh and clear early Autumn morning, we contrasted our walk from nearby Masham with hikes we’d gone on in Korea.

It was the weather we noticed first.  Probably it’s colder there now too, but then, we wore t shirts  and battled against the humidity.  We wore fleeces today.  We tramped through fungus-laden woodland in both countries.  Here though, as we glanced at the tussocky meadowland near the River Ure, we saw sheep, sometimes cattle .  There, valley floors were terraced with paddy fields, citric green with young rice. 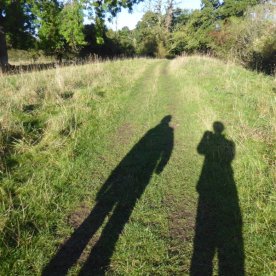 Here, there were distant views of solid stone barns and farmhouses – even a country house, Clifton Castle.  There, we were more likely to come upon a hidden Buddhist temple, its solid, yet graceful wooden form painted cinnabar, blue-green, white, yellow and black.

In Korea, woodland in the countryside is dominant once you get away from ‘civilisation’.  Here, we drifted between woods, meadows, ploughed fields and ground by the open river .

We enjoyed the lot.  But today, we appreciated saying ‘hello’ again to our familiar local landscape.