Poppies cascade from the pulpit in the Cathedral. 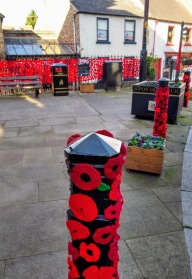 A window display in Calvert’s Carpets, naming some of the fallen.

The Cathedral from Kirkgate.

The bandstand in the park.

Soon, it will be the eleventh hour of the eleventh day of the eleventh month.  One hundred years since Armistice Day 1918, and the end of World War I.  Since the 1920s, here in Britain and the Commonwealth, the poppies which were so ubiquitous in the Flanders fields of battle have been used as a symbol to commemorate those who died in conflict.

For about a year now, Ripon has been making plans for something rather special – The Ripon Community Poppy Project.

Hand knitted poppies have appeared all over town, specifically a great avenue of them on the route between the Cathedral, past the Market Square and Town Hall and down towards the park – Spa Gardens. Shopkeepers have dressed their windows in commemoration.  All this year, the citizens of Ripon and beyond have been knitting and crocheting dozens of poppies, scores of poppies, hundreds and thousands of poppies. Sadly, not me.  I can’t knit.  Now these poppies are being displayed.  Everywhere.

It’s been an extraordinary project, involving the young, the old, the housebound, all of whom have been united in wanting to have Ripon remember the fallen in a striking yet appropriate way.

And there’s more.  I’ll be posting about ‘Fields of Mud, Seeds of Hope’, and  events at the Cathedral later.  For now, just have a short walk round Ripon with me and enjoy the poppies, as you remember the terrible story of the Great War.

*’In Flanders Fields’ by John McRae.