I’ve got lots of readers with Yorkshire connections.  With addresses in Australia, southern France, London, Northumbria, Spain and East Sussex, among other places, I bet not one of them has celebrated Yorkshire Day.

Apparently it all began on August 1st 1975, in Beverley, as a protest movement against the local government re-organisation of 1974′

Who knew?  Not me.  Not anyone I know.  We all bumbled through life in the 1970s, 80s, 90s, and though the early years of the twenty first century, blissfully unaware until about five years ago that we were supposed to be partying for Yorkshire. 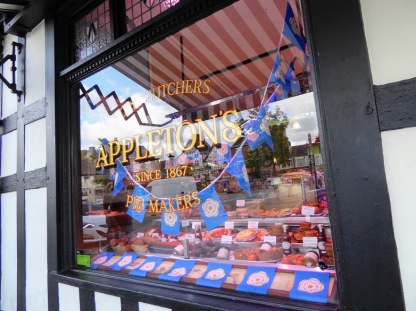 Now Yorkshire cities take it in turn to host Yorkshire Day, and this year it is Ripon’s turn.  This meant a fairground in the Market Square, a procession with a band and civic dignitaries, a service in the cathedral, picnicking in the Park, and all manner of stalls in the town centre, mainly celebrating Yorkshire charities and institutions. 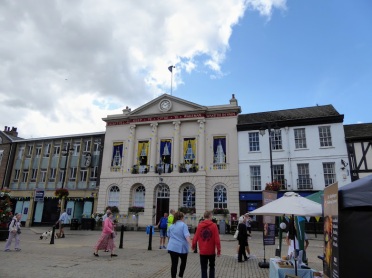 It’s early yet. It’s still quiet round the Town Hall. 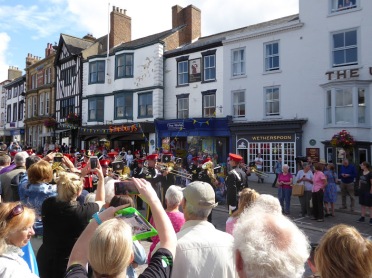 If you can’t see the procession, catch it om your phone …. 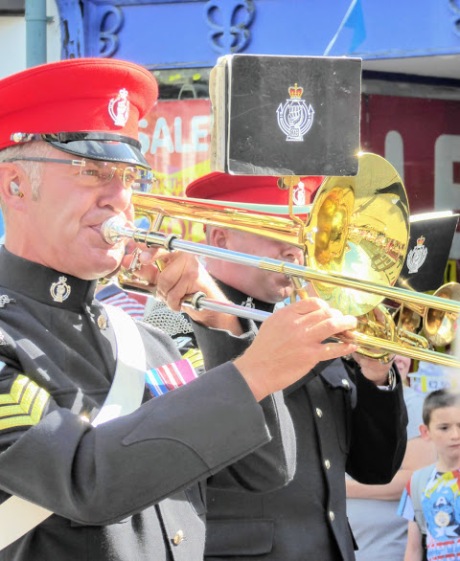 Good old Punch and Judy: ‘That’s the way to do it!’

This bank of flowere was a great place for photo opportunities.

Such as The National Trust’s stall celebrating Fountains Abbey & Studley Royal.  I was there.  I was one of a small team encouraging mainly families to have fun.  A few punters dressed up as monks from the Abbey, or as fine Georgian ladies who might have enjoyed the Studley Royal Water Gardens.  Most children – boys and girls – got enthusiastic about using the kind of wool which was produced in abundance at Fountains Abbey to get stuck into simple weaving.  They chose their colours with care, threaded their shuttles, and wove, wove, wove.  They ended up with nothing more elaborate than a bookmark, but goodness, they treasured them, and handed them carefully to mums, grandads – anyone who would put them safely away till they arrived home. 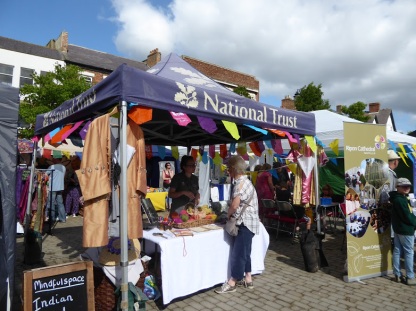 All that hand-dyed wool! Best get stuck into weaving.

And we all ate Wilfra Cakes.  That’s a sort of apple pie cooked with Wensleydale cheese, and a long-forgotten Ripon delicacy, produced thanks to the Workhouse Museum.

If we go back this evening, there are bands playing, and a big firework display.  Well, any excuse for a party in God’s Own Country.  Why not?

The Market Square at midday.