I knew it would end in tears. I should have listened to Nigel.

Malcolm’s favourite cake in all the world is coffee and walnut cake. So why not indulge him for his birthday? I made one a while back, and it was just as it should have been – rich and indulgent, with a moist crumb, but not too sickly sweet. How could I have forgotten that it was Nigel who delivered, as he invariably does, the Tips That Matter? I turned to another book, a BBC book for heaven’s sake, which is normally pretty reliable. My instincts told me it was wrong. The size of tin relative to the mixture, the heat of the oven – everything. But I decided to go for it in every particular: you don’t argue with the Beeb.

And of course I shouldn’t have done. The two layers were too thin to rise into a satisying mound of comforting coffee-infused sponge, the quantity of icing advised would have filled and decorated enough cakes to fill the WI stall at the farmer’s market. I was unimpressed. Malcolm’s being too polite to say so, but he did venture to point out that Nigel is King in this house, and his recipes should always be first port of call.

Here’s his recipe. I’ve just this minute compared it with the one I made. And would you believe, the two are all but identical?  Extraordinary.  Jut reading a recipe by Nigel seems to make it succeed.

It’s rare for me to follow recipes to the letter.  Like Nigel Slater, I tend to adapt, substitute, tinker.  So what I’ve learnt from this is that instincts are there to be heeded.  If a recipe seems wrong, it probably is.  For you, anyway.  On that particular day, at least. 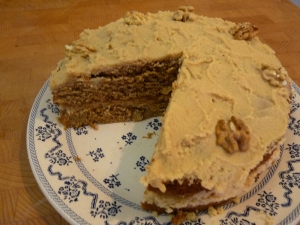 The failed coffee cake. It can’t be all that bad. We’ll eat it.

12 thoughts on “Coffee and walnut cake – the failure”