The march, as seen in a plate glass window.

On Saturday morning, we got up at 4.30 a.m. and didn’t get to bed again till 12.30 on Sunday morning.  In between, we drove to York; forked out £60 for tickets and travelled in a coach to London where we spent the day marching, before reversing the procedure in the early evening.  At our ages – we’re both long past retirement age – you don’t do things like that unless it’s for something really important.

It is. For us, and on behalf of our children and grandchildren, this Brexit Business matters more than almost anything else.

We are members of North Yorkshire for Europe, and joined for the day with York for Europe.  We came to London to march and campaign for a People’s Vote on the Brexit deal.

York and North Yorkshire organise themselves.

Don’t talk to us about the Referendum being the last word on The Will of the People (a barely more than 50% of those who voted changing the course of a nation’s history?).  Don’t tell us what The People voted for – nobody exactly knows.  Don’t tell us that when companies like Airbus and Siemens warn they may have to leave the UK in the event of a no-deal, that they are simply part of an irresponsible Project Fear.  Yes, we are fearful of Brexit: for us, for our families, for those in insecure employment, for those European citizens now resident here who had considered the UK their home.

On arrival in central London, we joined 100, 000 others on a slow two hour march down Pall Mall to Trafalgar Square and Whitehall and into Parliament Square, which completely failed to accommodate us all.

Despite our serious purpose, we had fun.  Look at the banners, the flags, the posters, the facepaint and wigs; the young, the old: marching, hobbling, manoeuvring wheelchairs and buggies – you’ll even spot one fellow being carried by Donald Trump (as if …).  We enjoyed Mexican cheers (the vocal version of a Mexican wave), bouts of chanting (‘What do we want?’ ‘A People’s Vote!’ ‘When do we want it?’ ‘Now!’).  We chatted with marchers from Wales, Devon, Germany, Reading, France, Lambeth, Scotland….. 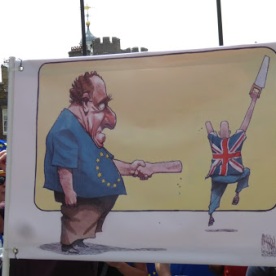 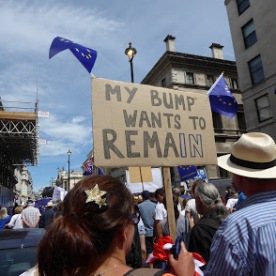 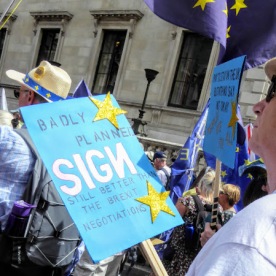 Then speeches. Rousing, energising speeches from the likes of Caroline Lucas MP, Tony Robinson, Vince Cable MP, David Lammy MP.  Passionate speeches from a hospital consultant, from the young people of OFOC (Our Future, Our Choice).  Video contributions from a WWII veteran and from Chuka Umunna MP.  We cheered them all, and at the end, especially the courageous Tory MP Anna Soubry.

What we want is a People’s Vote on the final Brexit deal, because apart from a principled few, most MPs are obeying the Whips and toeing the party line, regardless of either their own beliefs, or those of their constituents. If you voted for Brexit, and the government comes up with a good deal for the British people, you have nothing to fear from a People’s Vote.  The government will win the day, and we Remoaners will have to shut up.

If you think that, having learned the terms of the Final Deal, the people should have the Final Say, please sign the petition for The People’s Vote.  It’s here.

PS.  The Daily Express front page on the day of the march…..  there are no words…. don’t they read the news? 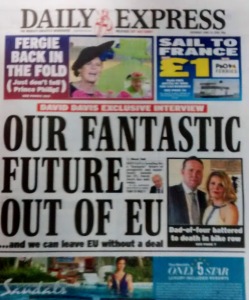 47 thoughts on “This Brexit Business: marching for the People’s Vote”