Woodland on the Cleveland Way

An early morning on the Ripon Rowel walk.

The beach at Filey. 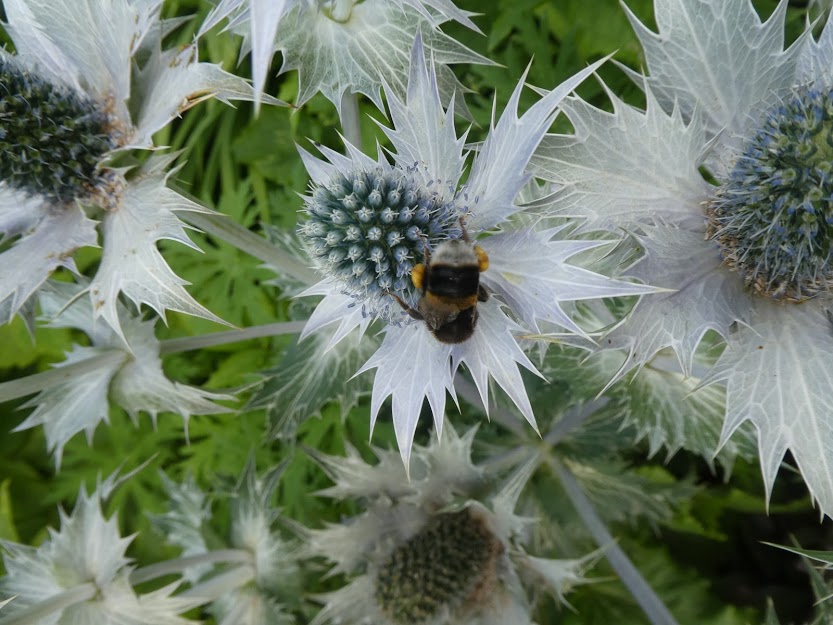 A bee among the eryngium.

… or simply hoping to look exactly like the surrounding grasses. 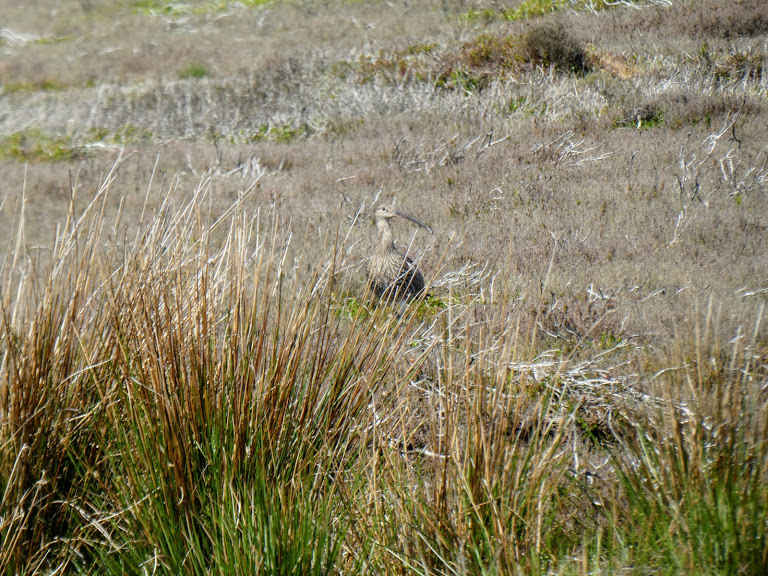 All of these shots were taken under a Yorkshire sun.

Lens-Artists Challenge #109: Under the Sun

… as she rides the thermals above us in Wharfedale?  I don’t know.

But this is what I see. 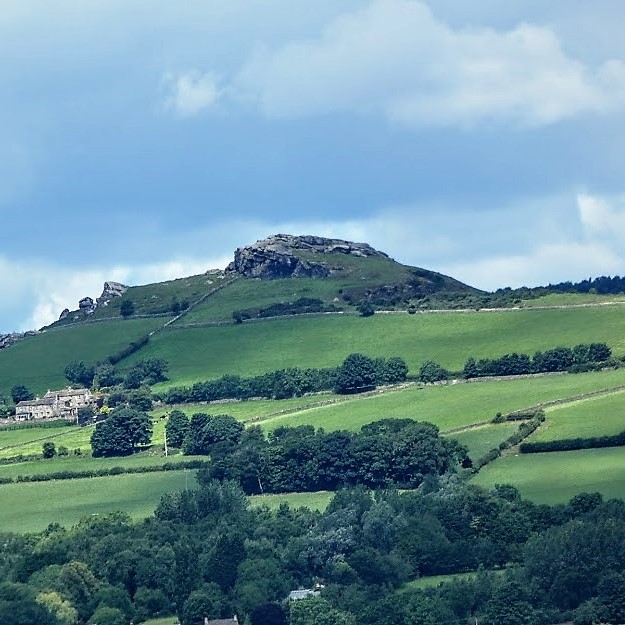 We went for a walk in Wharfedale yesterday.  We saw a verdant landscape.

Followers of this blog will be familiar with images of verdant meadows, of rolling green hillsides studded with sheep, of grasses swaying in the breeze – all illustrating our walks round Yorkshire.

Today though, I’m going to show you the same Yorkshire scenery, as it looks after a fortnight’s heatwave: the kind of consistently sunny weather that I can’t remember enjoying since I was pregnant with my son, back in 1976. We’re not used to this. Meals are taken in the garden. Our yoga class happens on the cricket pitch. Evenings are spent out of doors.

And the grumbling has started. ‘Eeh, it’s too ‘ot. It’s not natural, is it? I’ve ‘ad enough, me’ Not me. I’ll gladly lug watering cans about to water the flowerpots round the door. Though it might keep everyone happy if we could have nightly rainfall, strictly between the hours of 11.00 p.m. and 5.00 a.m.

A bridge over the diminished River Wharfe.

Luckily the trees are still coping without rain. 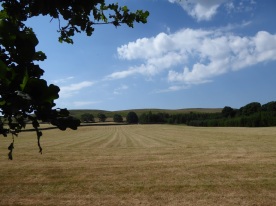 They cut the hay a few weeks ago. No more grass has grown since then.

That cloud seemed to promise rain. None materialised. 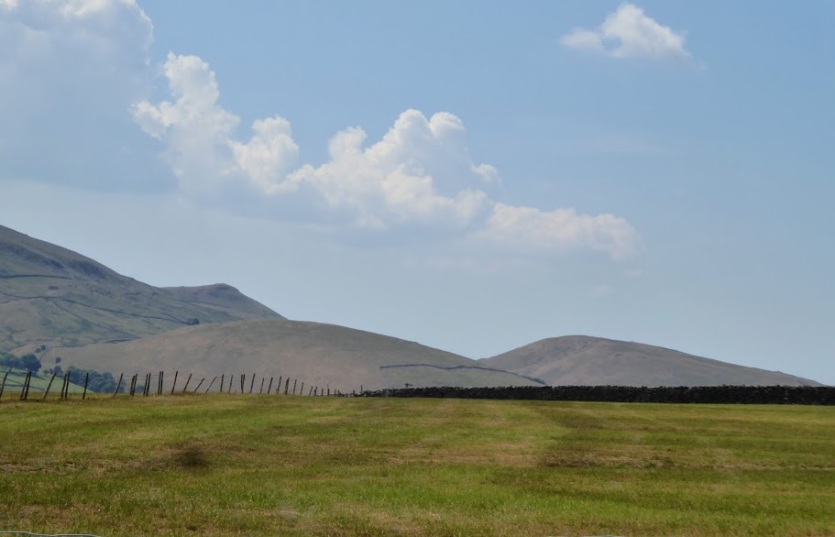 Our friends from Laroque d’Olmes are with us.  They’ve visited us in Yorkshire before, and are big fans, both of the friendliness of the locals, but more especially of the landscapes, whether dramatic or domestic, that we’ve been able to show them.

The other day it was the turn of Wharfedale, whose dramatic landscape was sculpted first of all by the glaciers of the Ice Age.  Since then, the River Wharfe and its tributaries have created waterfalls and river cliffs, cut gorges and deposited patches of sand and shingle on riversides.  We couldn’t show our friends the underground landscape of passages, caves, pools, streams, waterfalls, stalagmites and stalactites: but on a day such as we had on Sunday, with the sun shining and the sky a startling shade of blue, who cared?

We took them to Kettlewell, and on a walk worth doing for the names of the features we passed.  You go up Dowber Gill, and pass the Five Sisters waterfall.  Then it’s on to Providence Pot and the old lead mine workings, up to Hag Dyke: Great Whernside’s just further on. 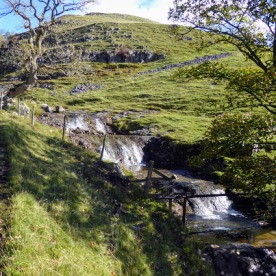 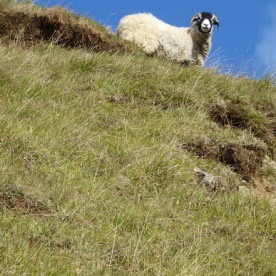 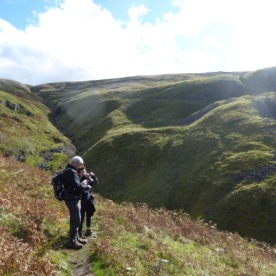 We finished our day at Grassington, having a quick look at the dramatic waterscape at Linton Falls.

A fine re-introduction to Yorkshire. 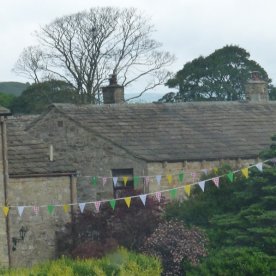 Even isolated houses in the country get in on the act.

Red white and blue bunting; yellow, green, white and spotted bunting; multi-coloured bunting: that’s what you’ll see as you pass through the Tour de France communities of West Yorkshire, and Craven and Richmondshire in North Yorkshire.  Here in Harrogate District, and in Hambleton too, it’s those jolly little knitted jumpers in all the Tour-jersey colours that are festooned round town.

We know, because yesterday we got up betimes, had a healthy breakfast, packed maps and drinking water and set forth to Ride the Route for Day One of the Tour de France.  On our bikes?  Not likely, though many people are doing exactly that.  We took the car, because the whole circuit is 195 km. long.  The Tour riders will get that done in not much more than 5 hours.  We were out of the house for 9 hours.

Leeds celebrates the Tour de France with a series of cheerful banners.

We didn’t quite do the lot.  From Leeds, the riders will take it steadily till they get to Harewood House, between Leeds and Harrogate, and that’s where the race will begin in earnest.  So that’s where we began too, though unlike the competitors, we couldn’t ride through Harewood’s grounds.  So join us as we begin our own Tour, not far from Pool-in-Wharfedale.

A cheerful bike at Pool-in-Wharfedale

A butcher’s window in Otley.

On the route in Wharfedale. 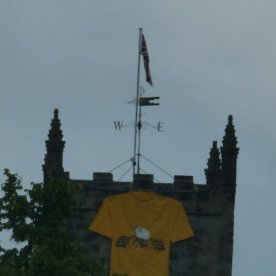 The route near Skipton, warning the road will be closed on the day. 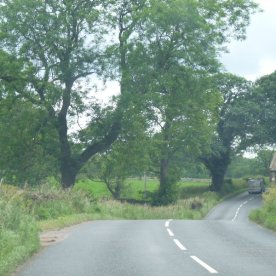 The road near Rylstone.

An easy stretch of the route.

The scenery here is the gently rolling countryside of lush fields and woodlands that characterise Lower Wharfedale: it’ll break the riders in gently.  Through Otley and Ilkley, our winding road took us through quiet pretty villages on into Skipton.  Now we approach the Yorkshire of soaring fells and dramatic limestone scenery whose fields are bounded by  dry stone walls.  The area round Kettlewell  used to be important for lead mining.  These days sheep and tourists – walkers and cyclists – provide the village’s income.  Unlike the cyclists, we paused for a leisurely lunch at the King’s Head.  Fabulous food, with friendly service.  Very highly recommended, but perhaps not if you have to ride ever upwards over the fells after you’ve eaten.

Kettlewell. Look for that Tour jersey up there on the hillside.

As you travel northwards, then westwards from Kettlewell to Hawes, via Buckden, Thoralby, Aysgarth and Bainbridge, you’ll be climbing through increasingly dour and empty hillsides.  I love their severe beauty, and relish too the occasional descent into the valleys where once again the road passes through glades of trees leading to picture-postcard villages.

The road near Buckden. 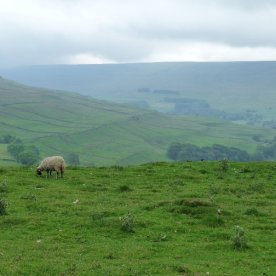 Only sheep for several miles. 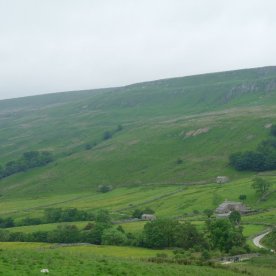 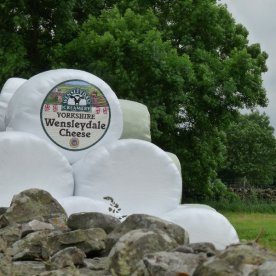 A novel way of advertising cheese: on the side of a hay bale.

A house outside Bainbridge welcomes the Tour.

Then Hawes.  Hawes has taken its duties as Gatekeeper to Buttertubs pass, where the King of the Mountains will gain his crown, very seriously.  The King of the Mountains gains a red-spotted jersey for his efforts, and Hawes has become a red-spotted town for the duration.  Bunting, shop fronts and decorations, even whole houses have been painted white with large red spots.  The effect is very jolly and festive, and Hawes, it’s clear, plans to have a great Tour.

A friendly French welcome at Hawes.

The Mulberry Bush welcomes the Tour….

… and King of the Mountain mugs.

A house in Hawes.

But then it’s Buttertubs.  There are few more dramatic roads in England.  It climbs sharply, but there are sudden descents, unlooked-for tight corners and mile after mile of uninterrupted moorland view.  If I were a Tour Groupie, this is where I’d want to be to watch on 5th July.  At its highest point, the road can be seen as it swings right, left, up and down for many a mile.  This is where those riders will be put to the test.  But it’s not over at the bottom.  Because here, the road chases round unexpected corners, bounces over small ancient bridges, darts in and out of woodland, narrows rapidly as it skirts past hamlets…. they won’t be able to relax for a second. 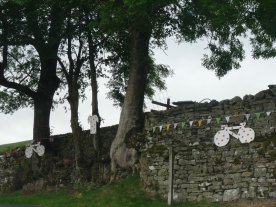 Welcome to the King of the Mountains!

Another fine welcome on the road from Hawes to Buttertubs. 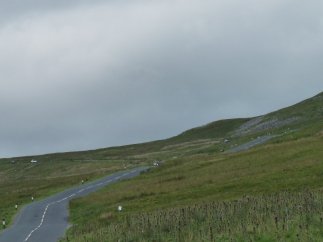 The road at the top.

A cyclist rides the route. 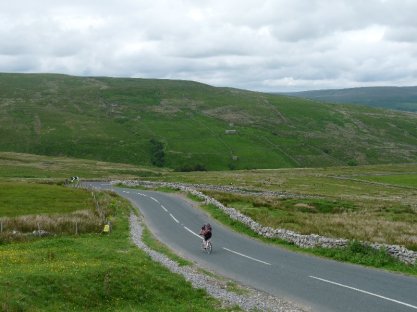 By the time the riders reach Reeth, they’d feel entitled to a bit of down-time.  But no.  There’s another long moorland slog before, at Leyburn, civilisation kicks in once more.  The villages become more frequent, the countryside softer and sweeter.  We trundled in our car back home to North Stainley, having done the home-to-Harrogate stretch first thing in the morning on the way to Harewood.

A challenging descent in the village of Reeth ….. 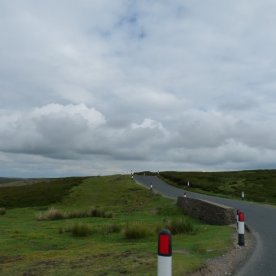 …. not over yet. Another moorland climb before Leyburn.

And at Leyburn, even the Parish Church joins in the fun.

We were left with an impression of how the Tour has fired the imagination of many communities through which it will pass.  Not all of course, but many have seized the opportunity to build on the opportunity the Tour provides.  They’ve involved everyone from the youngest to the oldest in generating understanding of aspects of French life, or of sport and cycling, of promoting the Arts in the widest sense, and in bringing the whole community together quite simply to have fun together, both in the period leading up to the Tour and on the day itself.  Our own village is a case in point: more of that later.  The once-in-a-lifetime opportunity the Tour presents means that it’s more eagerly anticipated here even than in France, where for years it’s been an important part of the summer calendar.  Those people who’ve shuddered with dislike and arranged to go away for the duration may come to think they’ve missed out on something quite special, and uniquely enjoyable.

A cheerful corner in the next village along, West Tanfield.

What’s not to like in a walk that passes through places with such enticing names?  It was Rosemary who led the Ripon Ramblers yesterday (we’ve firmly signed on the dotted line for membership) and she’d organised not only a splendid walk with varied Dales scenery, but a warm sunny day too.  Here are my picture postcards from the day: click on the images you’d like to see enlarged, or to have a slideshow

We crossed over the ancient packhorse bridge at Burnsall to begin our walk.

Then we walked along the River Wharfe past farmland, using the Dalesway path.

Sometimes we had open views. 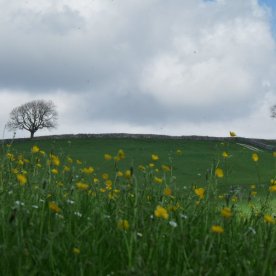 And here’s a view across to the hilltops. 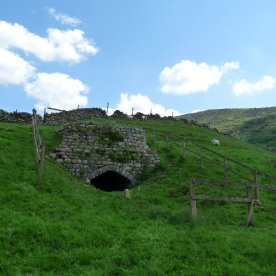 A disused ancient limekiln: there are plenty in the area.

Northumberland sheep accompanied us along this bluebell-strewn path.

Hawthorns on the skyline.

A view across the Dales. 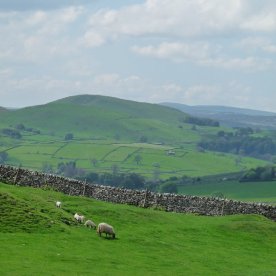 A view across a drystone wall.

A view glimpsed through the hawthorn blossom.

Back to the River Wharfe again.

Burnsall – our starting and finishing point.
Widgets
Follow From Pyrenees to Pennines on WordPress.com