… yesterday in fact, I woke up to this.

It’s the same window I showed you last Monday, but now November mist has descended. I went downstairs. This.

It wasn’t raining. It wasn’t particularly cold. What’s one of the Commandments of Lockdown? ‘Thou shalt exercise daily’. So I did. I took my camera, and explored the local lanes: familiar sights blotted out, as others loomed out from the general obscurity. At just 11 o’clock, I stopped, just for a while: it was Remembrance Day. I heard what a rarely notice as I walk – the constant undertow of birds murmuring and chittering on more distant shrubs and trees. It reminded me of John Lewis-Stempel’s book – Where Poppies Blow. This wonderful account examines the restorative role of nature to those soldiers confined to the trenches in the First World War. For just a fleeting instant, this was a moment I could share with them. Except I came home to a glowing wood-burning stove and a hot cup of coffee.

Citizens of Ripon and beyond have been calling into the cathedral as often as they could over the last few weeks.  Not necessarily to view this ancient building, or even to spend quiet moments reflecting.  Perhaps not even to view the poppies which are here, as they are throughout the city centre.

We’ve all been visiting the Fields of Mud  in the Cathedral itself.  Back in early October, that’s all we could see.  A large brown rectangle of damp mud, surrounded by sandbags.  This mud is from Passchendaele, and from a Great War military camp in Ripon. As, over the weeks, the wet earth dried and cracked, five ghostly, battle weary figures slowly emerged on the surface.

This image, exhibited in the Cathedral, is a print projecting the final appearance of the piece.

There are millions of ungerminated poppy seeds lying dormant in that mud.  When the piece is decommissioned later this month, it will be broken up and segments will be made available to the public to create their own memorials.  This work’s legacy can continue indefinitely.

About a fortnight ago, the figures are beginning to take shape.

This astonishingly moving and evocative piece is the inspiration of Dan Metcalfe: his farming background has given him an understanding of mud.  It’s disagreeable, destructive and even dangerous, as every WWI tommy well knew. But it also harbours seeds, waiting to flourish and grow when conditions are right .

Now the figures are fully visible, as the mud which surrounds them has dried out.  And so we can see that these are the same figures that have appeared round town, near North Bridge and the Cathedral itself, at Hell Wath and Rotary Way: and in nearby Sharow, where the British Legion home for former service personnel used to be.  These soldiers, and a nurse appear as silhouettes, made from rusted metal, and they are trudging home, their backs to the conflict and facing the future.

This tommy is facing the burial ground of the former soldiers who ended their days at peace in the British Legion home at Sharow, Ripon. 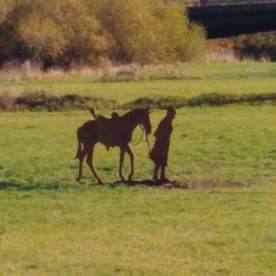 Ripon city has recently made us keenly aware of the sacrifices  made in the Great War.  But the poppies, the Fields of Mud are not the whole story.  Tomorrow, on Remembrance Day, I’ll show you Ripon’s Remembrance Light Show.

Fred and Old Bones trudging home near North Bridge, Ripon. The soldier’s pipe is turned upside down to keep his baccy dry during the inevitable rain. This brilliant image was captured at sunset by Andrew Dobbs. (https://www.andrewdobbs.photo/)