I’d booked my ticket the day before, and arrived at the station as directed, about an hour ahead of its scheduled departure.  It was just as well.  A station official took pity (for a small fee…) on the clueless European , who had no idea that she had to check in, in the manner of an airline passenger, or that she would find her seat by looking for her name on the passenger lists posted at each carriage door. 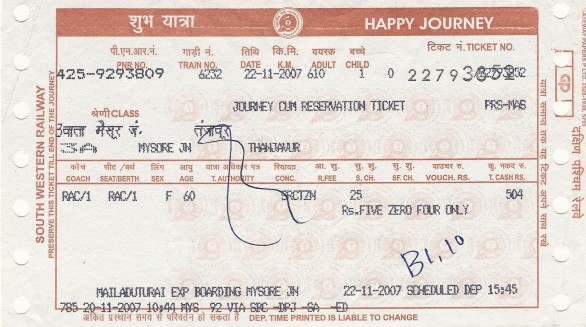 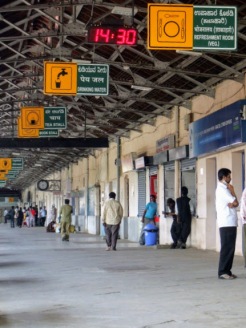 On the station platform, everyone was getting on with life.  A large family spread themselves on the ground, got out metal plates and canisters of food and got stuck in.  Rather than sit in a hot train, I headed for the calm of the Ladies’ Waiting Room until it was nearly time to go. 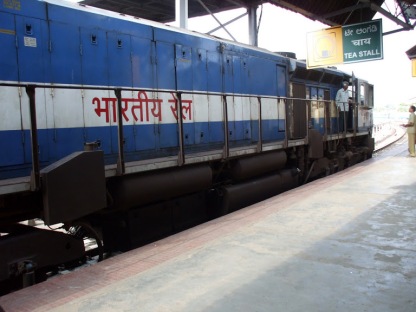 My train to Thanjavur 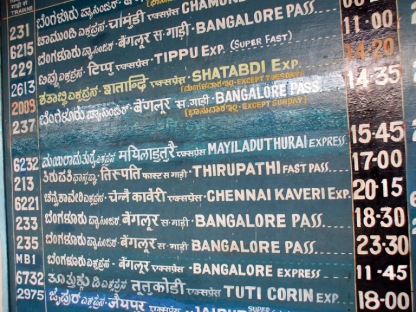 The train itself, once it got started got into the habit of making long stops nowhere in particular.  Chai and coffee boys went up and down the train.

As darkness fell, I was struck by the low level of lighting in the towns we passed through, and more particularly the stations.  Even at Bangalore, where we stopped for ages.  More chai, coffee and water sellers got on, then  vendors selling hot meals: I chose a vegetarian meal with rice and several different vegetable dishes – hot and very good value.  A young woman got on, having had her hands and wrists recently henna-ed on both sides.  Managing her life, which seemed to consist of calling people on her mobile, without using her not-yet-dry hands was quite a challenge. One family produced a three course supper with several dishes, on metal plates, then mum disappeared to wash up at the sink in the corridor.  I had different conversations with various passengers, limited by our inabilities in each other’s languages.

At about 9.00, we all got ready for bed. Our compartment got separated out into two sets of beds at three levels and smartly uniformed staff handed out crisply laundered sheets, pillows and a double blanket each for us to make up our beds in our own way.  For once, I slept … until 4.00, when so many passengers got out at Trichy.  I had only an hour to go before arriving at Thanjavur.

I was dreading having to wait on a dark deserted station for two hours (Waiting for whom? Another tale for another time). But it wasn’t deserted.  Not at all.  The booking hall was thronged with men – young men, old men, all sitting in convivial groups on the ground sorting and collating that day’s newspapers.  It took them almost the whole two hours that I had to wait until the next chapter of my story began…. 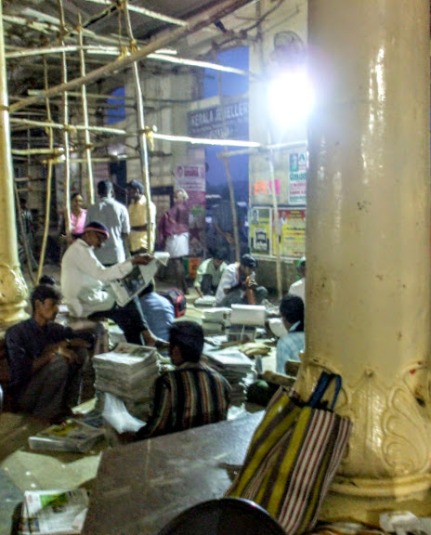 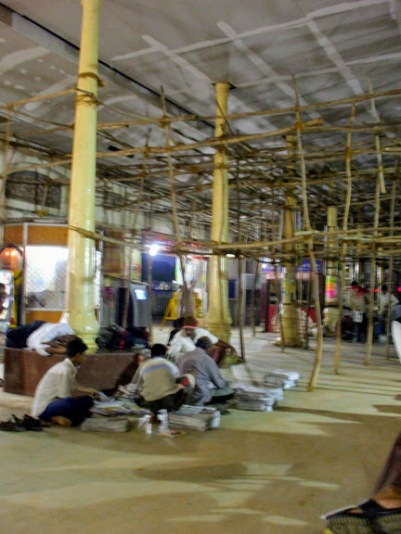 Click on any image to view full size and to read the captions.

This was part of my Indian Adventure, November 2007.  I have used the place names that were then widely used, rather than the official names, which now seem more widely adopted.