The twins have had it tough these last few days.  It was the week of the infamous and widely criticised SATS, the final year tests for all British primary school children.

We thought we knew a place where they could see that compared with some, their lives weren’t too bad.

Quarry Bank Mill in Cheshire  is one of the best preserved textile mills of the Industrial Revolution in its day, a beacon of progress and enlightenment in 19th century Britain.  It’s in a glorious wooded setting, just as its original owner and developer, Samuel Gregg, intended.  There’s running water to drive the water wheels, and it was well-connected by road, and by the Bridgewater Canal, to have its products transported to the busy port of Liverpool.

Samuel Greg, and then his son Robert, were careful, paternalistic owners.  They looked after their employees – very well, according to the standards of the time.

We went to the Apprentice House there to see what it was like to live there as one of his child apprentices.  The house was in use from about 1790 to 1847, and children would be taken from the age of nine . They had often come straight from the harsh and bleak conditions of the workhouse – institutions that only the truly destitute would go to.  Tough as life at Quarry Bank was, it must have seemed rather wonderful to anyone who’d come from this punishing regime.

We were taken round by the ‘housekeeper’, and we obeyed her every word, and were sure to remember to call her ‘ma’am’.

She met us in the schoolroom.  The young apprentices received  an elementary education, though only on Sundays.  All children learnt to read.  The boys learned arithmetic too, and how to write – it was only necessary for girls to learn to sign their names.  They had more important skills to learn: cooking, cleaning, making clothes for the inmates.

Here’s how their week went:

Sundays, there was no work at all.  Just church, morning and early evening.  But the church was two and a half miles away, and they walked there and back – twice.  In the afternoon, they had their lessons.  However, unusually for the time, they were never struck.  Instead, as a punishment, they’d face the wall, holding small dumb-bell like weights in their out-stretched arms.  This was good for muscle tone. You’d certainly be punished like this if you tried to write using your left hand. Until recently, left handedness has been frowned on

In their dormitories, they were two to a bed, sleeping on mattresses stuffed with straw, changed every year.  They even had blankets.  They had medical care when they needed it too.

Work was hard.  When we visited on Sunday, the huge, cavernous factory rooms were filled from floor to ceiling with machinery.  There were machines for carding, machines for spinning, machines for weaving.  Each room, in its heyday, might have had up to 60 machines.  On Sunday, each room had no more than one machine working.  The noise was deafening.  We were urged to spend only a limited time there, and the volunteer machine operators all had effective ear-defenders. Imagine 60 machines, clattering and clanking away 12 hours a day.  Men and women would have charge of small groups of machines, constantly refilling , re-threading, checking, checking.  The children’s jobs included working as ‘scavengers’, crouched between the constantly moving machinery, clearing fluff and other obstructions: or running to re-stack piles of bobbins from a central point.  Like everyone else, they’d constantly be inhaling cotton waste, and were prone to the risk of repiratory disease, and an early death. 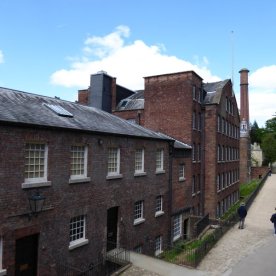 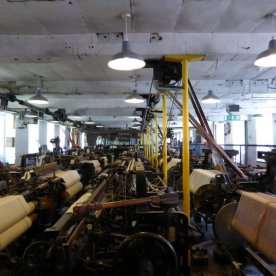 Banks of looms – the children crawled between them, keeping them functioning efficiently.

These days, Quarry Bank is a wonderful place to spend the day.  We quite simply didn’t see it all.  But we’ll be back.  And if you get the chance, I suggest you go there too. 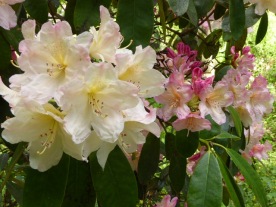 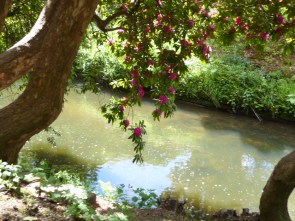