Almost ten years ago now, I had my Indian Adventure, when I travelled first of all with a small group of like-minded English travellers, and then solo round southern India.  That’s when I started blogging, using TravelBlog, though I later transcribed it onto WordPress which may be more user-friendly.

The culture shock of arriving in Bangalore with its constant traffic noise, its motor horns, its street-cattle, its monkeys, its people, its eagles and vultures wheeling overhead is unforgettable.

A back street in Bangalore, and a few rickshaws.

Arriving in Pondicherry some three weeks later was just as much of a jolt. Suddenly I was transported (after a motorway journey which included goats grazing on the central reservation) to colonial era France.  Here were policemen in kepis, elegant public buildings, corner shops selling baguettes and croissants.

My guesthouse was a charming 19th century throwback which would have been totally at home on the French Riviera.

My verandah at le Rêve Bleu.

Yet I was undoubtedly in India.  There was a spot of building work going on outside my bedroom window.  Here’s the delivery wagon:

A delivery from the builder’s Yard 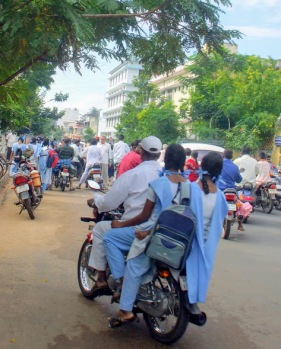 And here’s the beach:

The beach at Pondicherry.

Here though is the photo which answers this week’s WordPress photo challenge: ‘Names’. A street sign which represents the many-faceted cultural references of what I thought of as my favourite Indian city.

In a couple of days I plan to re-blog an old post of mine which has something further to contribute to the ‘Names’ theme.