At the moment, we all need the glow, the zing that a good splash of yellow can provide. Luckily, Jude has provided the perfect opportunity for us to hunt down all our yellow-rich images, in her challenge Life in Colour. Let’s have an injection of gutsy, vibrant lemon, amber and gold alongside our long awaited Covid vaccines.

I’d thought of showing those springtime flowers we all love – aconites, daffodils, primrose, tulips and kingcups. But maybe I’ll save those for another day. Here’s a complete hotch-potch of yellows to cheer up a day which, here at least is thoroughly and dismally grey.

To view any image full size. just click on it. The quotation of the post title is by Vincent Van Gogh. No wonder he liked sunflowers. And the header photo shows one word from another quotation. Wander round the St. Paul’s area of London and you’ll eventually uncover the whole sentence, from Virginia Woolf’s novel, Jacob’s Room: ‘What are you going to meet if you turn this corner?‘ What indeed? In this area of London, enough to fill an entire guide book.

I arrived at Bangalore airport at about 6.00 in the morning. There were several hours of baggage handling, airport confusion and a taxi-ride through town, with auto-rickshaw drivers weaving and buzzing round us like angry wasps, before I reached my small family run hotel in a quiet residential quarter of town.

I stepped out of the car to the calls of loud birds yelling and whooping, and shortly after, found myself escorted to a roof terrace, where I gazed at distant huge birds with enormous wingspans (eagles?  vultures?) coasting lazily on the thermals. Attentive staff served me with unending supplies of small soft spongy pancakes – idli – with thin aromatic and spicy dipping sauces and much-needed coffee.  It was 9.00, but my body knew that back in England it was 3.30 a.m.

Unable to rest, I set off to explore the quiet back streets near the hotel.  Dozens of women were out in the back streets, crouching over their handle-less brooms, sweeping and re-sweeping the pavements.  Stallholders on street corners sold bananas, brown and well past their sell-by dates, or coconut juice straight from the shell.  A few bored monkeys sat about on air-conditioning extractor pipes.  At a building site, a bullock stood patiently while two men shovelled rubble into the cart it drew.

Then I reached the main hub of Bangalore, MG Road (Mahatma Gandhi Road) with the pavements, such as there were, thronged with pedestrians.   In the road itself, cars, vans, trucks, auto-rickshaws, all constantly blaring their horns raced along, over-taking, under-taking.  However would I find the courage to cross? Answer.  By finding a group of others also wanting to get to the other side and introducing myself into their midst.  There’s safety in numbers.

I hadn’t wandered too far when I was picked up by an auto-rickshaw driver.  He could probably see ‘Arrived from Europe this morning’ tattooed across my forehead.  He offered to show me round for 10 rupees.  I wasn’t green enough to believe that, but I was exhausted, and it wasn’t an unattractive proposition.  It was memorable – and fun.

He proved an amiable guide whose English, while obviously hugely better than my Kannada, often led to mutual incomprehension.  Still, he hared round a variety of sites introducing me to the city he loved. ‘This is my Parliament building.  This is my national bird.  This is my Rajah’s Palace.’  And he waited while I ‘did’ Bengalaru Palace, one of the homes of the Raja Wodeyar.

As the Lonely Planet says, you are personally shown round by an aged retainer, who is rather keener to show you fly-blown pictures of the Royal Family than the quirky furniture and fittings.  Seedy but fun.  It’s not often you see cattle grazing in royal gardens.

He was in the pay of various shops.  Of course he was.  And he took me to some.  I was quite clear that I was not going to buy anything.  Not on my first day.  This proved to be an effective bargaining tool to bring prices tumbling to the level the shopkeeper planned to sell at in the first place.  Reader, I bought a couple of things, and nor did I regret it.

My new friend urged me to ring him whenever I needed transport in his fifteen year old rickshaw.  I didn’t.  But later that day I wished I had.  A different driver saw me puzzling over my map, and offered to help.  But his help turned out to mean trying to persuade me into shop after shop to buy. When he realised I really wasn’t going to buy anything, he dumped me.

I was in a poor part of town (where? where?) and with a 500 rupee note as my lowest form of currency.  When the average meal costs seven, I knew that offering this note in shops simply wasn’t an option.  I trailed round back streets busy with rickshaw drivers repairing their trucks, vendors splicing huge melons and squash to sell, garland makers fashioning powerfully scented jasmine garlands for Diwali, sheep drinking at doorways, solitary cows chewing at a pile of rubbish, tent villages…. until I finally found a travel agent, where they changed down my note.

A mosque near the market in Bangalore

And then I took a third rickshaw, asking for an address near ‘home’.  He took me directly there.  Food, an internet cafe, and home to bed, long after dark.  Night falls in a matter of minutes, at 6 o’clock.  My exhausted body knew quite well that the day was over.

This is my contribution to today’s Ragtag Challenge: Taxi

I began this blog almost ten years ago (What?  Really?).  But it wasn’t my first.  I’d started blogging two years before that, on a different platform, to record my memories of a very special holiday in India. It wasn’t the best of platforms and in fact it no longer exists.  Eventually I took a deep breath and moved to WordPress, so you can’t flick back and read about my Indian adventures here.

These days, I’m in a writing group.  Last week, we fell to talking about travelling, and about how we often overlook the pleasure of the journey in favour of impatiently anticipating our arrival at our destination.  It sent my memory scurrying back to India, and I can feel a series of posts coming on about Journeys in India.

Are you sitting comfortably?  Then I’ll begin.  Now that dates me……

I’d wanted to go to India for more years than I could remember.  As a London child and then as a student in Manchester, Indian culture had always been at the periphery of my life:  its foods, its smells, its clothing.

When we lived in Sheffield during my thirties there had been ‘The Arts of India’ at the Mappin Art Gallery, when craftsman from all over India came, and every day for about three weeks, made pots, wove, carved, and worked with inks and cloth in the art gallery. By night, since my then husband was the gallery curator, we’d eat together, joined by Indian heritage Sheffield residents who became our friends too. They would cook for us and we for them, and we’d talk into the night.

Some years later my son, by then eighteen and just finished with school, worked as a teacher in a village school in Uttar Pradesh, then travelled for some months following his nose all round India.  His letters – no emails then – tantalised me.

Family and work all pushed the dream of distant travel away. Until my 60th birthday and my retirement,  when my daughter and her husband gave me a very special gift to be spent on travel. India. That was it. I’d go there –  with no Malcolm, no friend, no companion found on Thelma and Louise – though I considered all of these options. This trip was for me.

And I went, choosing south India instead of the more visited north.  I have memories of markets, of quiet temples, in one of which I was blessed by an elephant, of cows and goats in busy city streets, of eagles soaring over rooftops, of eating at workmen’s cafes from banana leaf ‘plates’, of the Imam’s call to prayer every morning at 5.30 and every evening at 5.30.  I had a week in a small group too, in rural locations, discovering the parts of India that work the land. 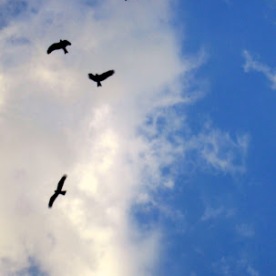 A back street in Bangalore 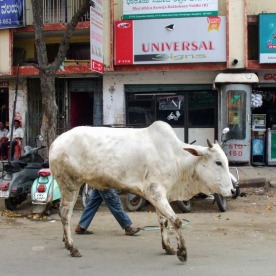 Cow on a mission in Bangalore 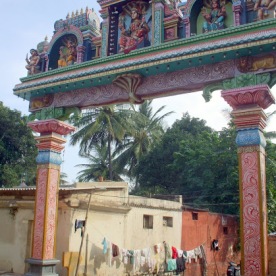 Entrance to a Hindu temple in Bangalore

Washing an elephant in the River Kaveri. 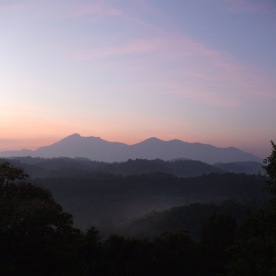 Sunset in the Western Ghats.

Above all though I remember journeys. It was on these journeys that I often felt closest to being an ordinary citizen doing ordinary things in an extraordinary  country.

Almost ten years ago now, I had my Indian Adventure, when I travelled first of all with a small group of like-minded English travellers, and then solo round southern India.  That’s when I started blogging, using TravelBlog, though I later transcribed it onto WordPress which may be more user-friendly.

The culture shock of arriving in Bangalore with its constant traffic noise, its motor horns, its street-cattle, its monkeys, its people, its eagles and vultures wheeling overhead is unforgettable.

Arriving in Pondicherry some three weeks later was just as much of a jolt. Suddenly I was transported (after a motorway journey which included goats grazing on the central reservation) to colonial era France.  Here were policemen in kepis, elegant public buildings, corner shops selling baguettes and croissants.

My guesthouse was a charming 19th century throwback which would have been totally at home on the French Riviera.

Yet I was undoubtedly in India.  There was a spot of building work going on outside my bedroom window.  Here’s the delivery wagon:

And here’s the beach:

Here though is the photo which answers this week’s WordPress photo challenge: ‘Names’. A street sign which represents the many-faceted cultural references of what I thought of as my favourite Indian city.

In a couple of days I plan to re-blog an old post of mine which has something further to contribute to the ‘Names’ theme.