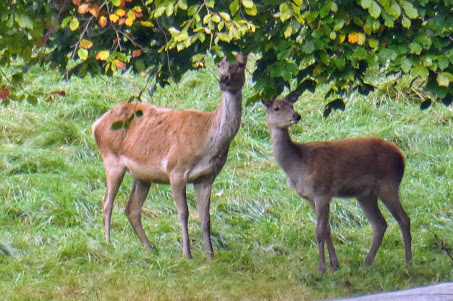 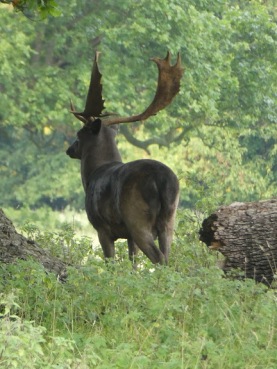 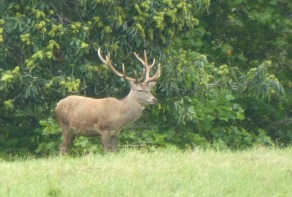 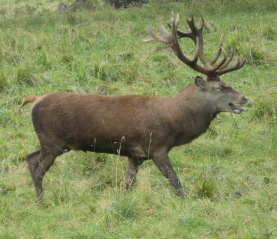 My contribution to Six Word Saturday.

It’s equinox season: that blessed time of year when day equals night, and when, for us, the days are getting longer.

It’s transition time in so many ways. Those wonderful winter trees, their tracery of twigs and branches transcribed against the sky are skeletal still: but only just. 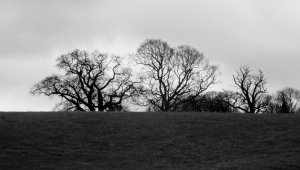 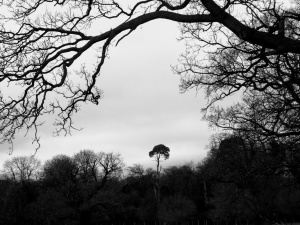 This morning, on my way out, I noticed tightly furled leaf buds, glossy and taut on shrubs in the garden. Two hours later, coming back, the tender leaves had burst out, tiny and delicate, waiting to be toughened up and to grow in the mild spring air. It was very windy too – hence no photos.

All photos apart from the first and the last one were taken walking through the parkland of Studley Royal, Fountains Abbey.

Father Christmas came early.  Three months without a camera was enough, he reckoned.  He lacked a beard and red clothing, and looked remarkably like Malcolm, but he helped me choose, provided the credit card and carried the new camera home for me.

We trialled it on Sunday.  The grounds of Fountains Abbey and Studley Royal is familiar territory, but reliably photogenic.

Even at ten o’clock, there was still mist rising from the Moon Ponds.  And even though the view from Surprise View is no longer surprising, it’s none the worse for that.

But look!  This is what we spotted in a distant meadow.  Time to put the zoom lens through its paces.  Aren’t these deer magnificent? 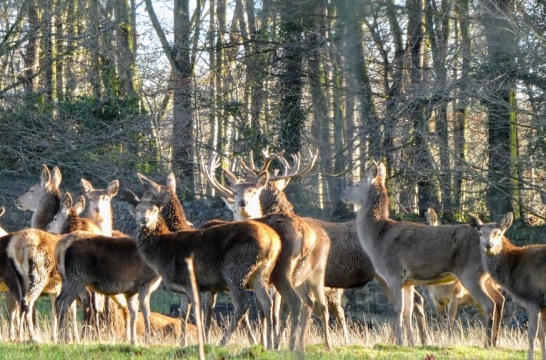 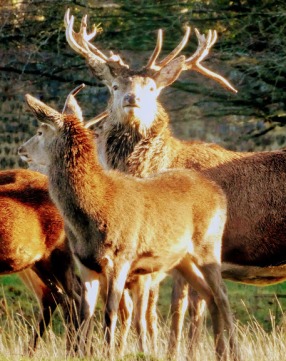 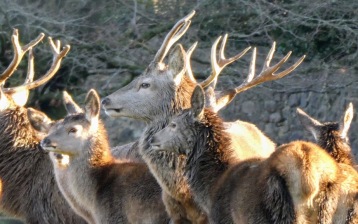 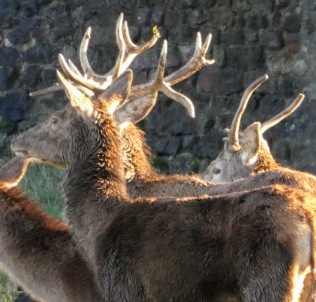 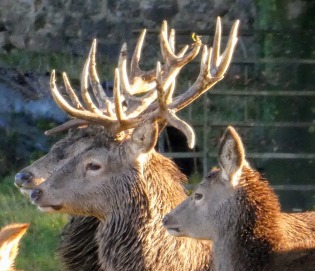 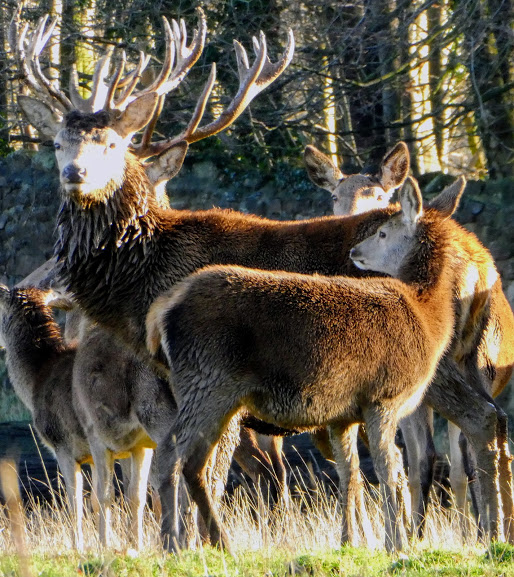 Later, we passed the fine Elizabethan Fountains Hall.  It was fun to contrast the view of the house itself with the version spotted in a puddle we passed. 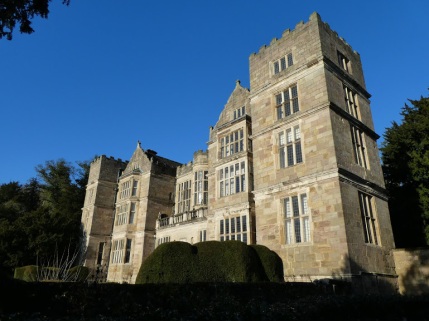 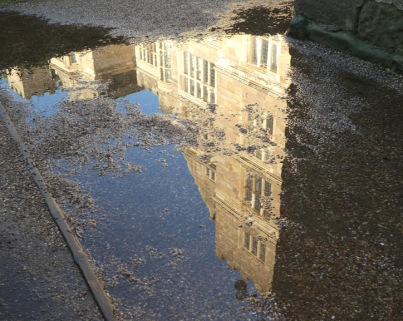 A good walk, and it’s good to have a camera once more.

As usual, click on any image to view it full size.

I enjoy Jo’s Monday Walks, and browsing through the posts of some of those who contribute too.  So I thought I’d join in the fun.  Yes, I know it’s Tuesday…..

It was cold the other night. Very cold. And for three hours, I stood outside in the dark. I was happy.

I was volunteering at Fountains Abbey and Studley Royal as part of an event that spanned two continents: in Poland; in Denmark; in Germany; in Russia; in France and in China. Do follow the links: you’ll immediately have a clutch of places to add to your ‘must visit’ list.

In all these places, for one dark chilly night in February, there was a Garden of Light. Normally, we can only enjoy the Water Gardens of Studley Royal by daylight. But thanks to this international festival, there was a new opportunity.

As night fell, lighting designed to spotlight the special features of the gardens pierced the darkness, revealing a garden in harmony with the philosophy of the time in which it was conceived: where Nature and Art work hand in hand. 18th century music played in the background. 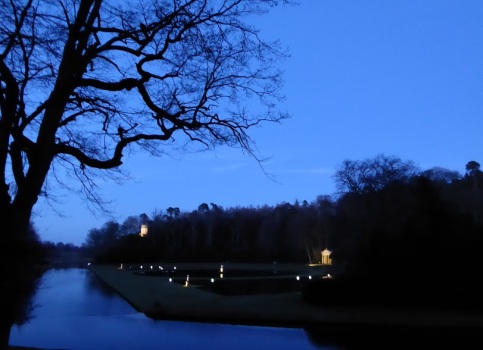 Visitors were able to stroll round, lanterns or torches in hand, focusing on the Temple of Piety and the classical statuary of the Moon Ponds; or glancing upwards at the Octagon Tower and Temple of Fame, all bathed in golden light. The Moon Ponds themselves were lit by glowing orbs – sometimes silver white, sometimes red or blue, fading in intensity as the evening wore on. 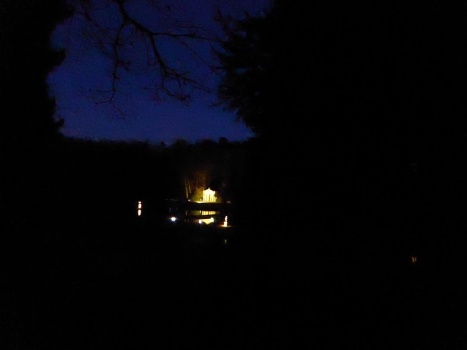 The Abbey too was lit up, though I barely saw this as it wasn’t my role to be available there.

The moon was perfect – exactly half way between waxing and waning, it lit the visitors’ paths and illuminated the night sky. Whenever I looked up there was Orion’s Belt – and so many other stars usually invisible to town-dwellers. 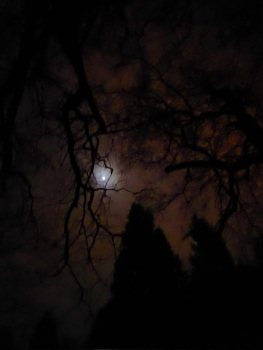 Those of us there relished the chance to enjoy this peaceful yet joyous occasion. And as the event drew to a close, owls reclaimed the night, and their plaintive hooting accompanied us as we walked away, chilly but content. 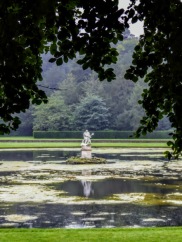 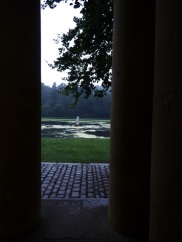 Sheltering in the Temple of Piety 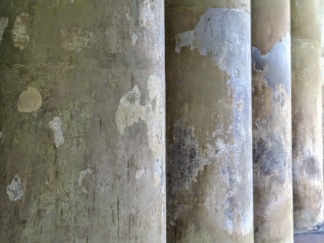 The columns of the Temple of Piety 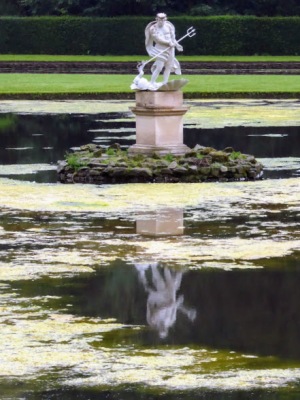 Neptune and his reflection. 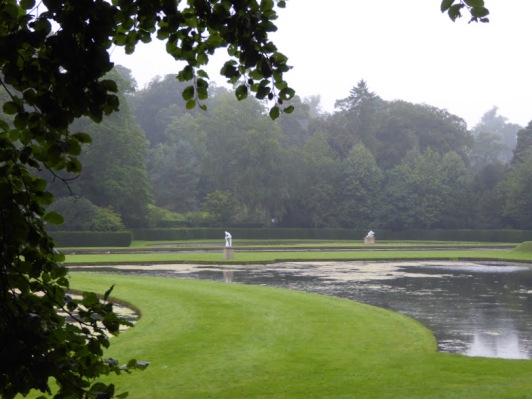 I was at Fountains Abbey and Studley Royal.  And it was raining.  I stood beneath the shelter of the Temple of Piety, and enjoyed the gracious structured elegance of the Water Gardens.  Centre stage was Neptune, Roman god of the waters, and of the Moon Ponds over which he presides.

And then I noticed that amid this ordered beauty, a coot family had built a ramshackle and highly unstructured nest.  I think the gardens’ creators, John and William Aislabie would have enjoyed the water birds’ cheeky appropriation of this most peaceful of scenes.

My contribution to this week’s WordPress photo challenge: Structure.

In 1132, thirteen Benedictine monks from York fetched up in a wild and isolated place we now know as the manicured and lovely parkland setting of Fountains Abbey and Studley Royal.  The Archbishop of York had offered them the land so they could establish a pious community based on silence, prayer and simplicity.

Over the years – over the next four centuries – they built a community with all the trappings of a large village: sleeping, living and working quarters, an infirmary, guest accommodation, a mill, a tannery, quarrying, as well as the daily focus of their lives, the Abbey church itself, where they worshipped eight times a day.

Their principal source of income was from sheep, whose wool came to be valued at home and abroad.  Merchants from all over Europe to buy and trade.

The Abbey site could not sustain enough sheep for this thriving business. Lay brothers (the manual workers of the monastic world) were sent further and further afield to establish small working sheep farms – granges.  During the 15th century they came here, and built the house in which we now live.

It’s changed a bit of course.  Who knows how much of the house is truly original, though the stone-built walls are a traditional, sturdy and strong build?  We no longer live in an upstairs dormitory, as the lay brothers did.

The Victorians divided the place into rooms for the servants of the country house which was built and attached to the grange in the 18th century.  The animals and working quarters are no longer downstairs, though the old, spacious and business like kitchen hearth still exists.

As I make the eight mile journey from here to Fountains Abbey I like to think of the heritage our home shares with this wonderful UNESCO World Heritage site.  Aren’t we lucky?

This post is in response to the WordPress weekly photo challenge: ‘Heritage’

If you’d found yourself in the Studley Royal estate in the early 1700s,  just along from the ruined Fountains Abbey, you’d have had a rather wild and rugged country walk along the valley of the River Skell, surrounded by woodlands.  You might have been able to glimpse the abbey in the distance.

This was John Aislabie‘s estate.  He’d inherited it in 1693, but was at that point in his life busy realising his  political ambitions – in 1718 he became Chancellor of the Exchequer.  Only two years later he was mired in the financial scandal of the South Sea Bubble, which ruined so many and shook the national economy.  He was disgraced and expelled from parliament.

He returned to Yorkshire, and devoted his considerable energy and wealth to creating the first water garden of its kind seen in England.  It owed a lot to formal French gardens of the time, and balances formal design with wonderful vistas set in an apparently natural landscape.

If you visit these days you’ll see a proper 18th century garden: the formal lakes, the temples and other follies, the carefully orchestrated views. Work continues year by year to rein the garden back to the detail of what those eighteenth century visitors would have seen.  After all, trees grow taller and spawn saplings which grow in their turn. The river silts up. Land slips.  Shrubs spread in an ungainly fashion.  Unwanted invading plants make the place their home

On Saturday, we went on a little tour to look at some recent work. The classical statues – wrestling gladiators and the like which have ornamented the gardens since the 18th century – are lead.  Marble would have been nice, but lead’s cheaper, so when they were new, those statues would have been painted in marble-look-alike white.

Now they’re white again.  It wasn’t a question of slapping on the Dulux though.  No, conservators hunted for evidence of the actual paints used by grubbing about in hidden groins and armpits for contemporary paint fragments, and experimented on discarded lead till they got the right shade, the right paint.

The formal ponds were once surrounded by planters and benches as well as statuary – contemporary paintings tell us that.  These will be replaced, as well as a couple of statues sold in the 19th century when the estate fell on hard times.

Ungainly shrubberies will be knocked into shape and brought down to size.  An informal garden will be planted with sweetly scented plants – roses, lavender and so on.  Just the place to sit and view the Temple of Piety and the Moon ponds.

Tent Hill will live up to its name once more.  The dense copse which covers it will be thinned out to make room for a tent something like an 18th century military campaign tent.  Not for military campaigns of course, but to house entertainments of various kinds, just as it would have done back in the eighteenth century.

So much to do.  But every piece of work brings Studley Royal even nearer to the intentions of John Aislabie, who first created this special place more than two ands a half centuries ago.