We visited a dozen or more Buddhist temples when we were in South Korea a few years ago.  And every one had long lines of lanterns, stretching the length of a room or a verandah, hung with lanterns that were in their turn hung with prayer intentions.  A new perspective on mindfulness.

We went to one of the oldest surviving Buddhist monasteries in Korea today, Bulguk-sa. Like Fountains Abbey, it’s a UNESCO World Heritage site. It’s been around about 250 years longer than Fountains, as it was started in the year 751.

Both are religious foundations. But whilst the monks were forced to leave Fountains Abbey on the Dissolution of the Monasteries in 1539, Bulguk-sa is still an active religious community. We were moved this morning by witnessing a solitary monk chanting his devotions in one of the buildings.

Both suffered the destruction of their buildings. Bulguk-sa, like so much of Korea’s heritage, was burned by Japanese invaders in the 1590s. Fountains Abbey crumbled following the Dissolution at much the same time.

Fountains Abbey remains a ruin. Bulguk-sa has been rebuilt. The Japanese destroyed Korea’s heritage so often and so comprehensively over the years that if significant buildings were not restored there would be, quite simply, nothing left.

So I think a twinning arrangement is in order. Exchange visits once a year as a minimum. Though with genuine Buddhist monks to welcome us at Bulguk-sa, I wouldn’t turn up in my polyester dressing-up robes from Fountains Abbey. 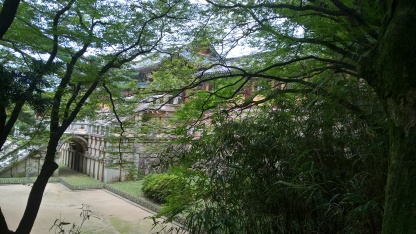