In 1132, thirteen Benedictine monks from York fetched up in a wild and isolated place we now know as the manicured and lovely parkland setting of Fountains Abbey and Studley Royal.  The Archbishop of York had offered them the land so they could establish a pious community based on silence, prayer and simplicity.

Over the years – over the next four centuries – they built a community with all the trappings of a large village: sleeping, living and working quarters, an infirmary, guest accommodation, a mill, a tannery, quarrying, as well as the daily focus of their lives, the Abbey church itself, where they worshipped eight times a day.

Huby’s Tower at Fountain’s Abbey, built not many years before the Dissolution of the Monasteries

Their principal source of income was from sheep, whose wool came to be valued at home and abroad.  Merchants from all over Europe to buy and trade.

The Abbey site could not sustain enough sheep for this thriving business. Lay brothers (the manual workers of the monastic world) were sent further and further afield to establish small working sheep farms – granges.  During the 15th century they came here, and built the house in which we now live.

The first floor was once the lay brothers’ dormitory. Now it’s our flat. I bet those monks didn’t look out over this lovely walled garden.

It’s changed a bit of course.  Who knows how much of the house is truly original, though the stone-built walls are a traditional, sturdy and strong build?  We no longer live in an upstairs dormitory, as the lay brothers did.

The Victorians divided the place into rooms for the servants of the country house which was built and attached to the grange in the 18th century.  The animals and working quarters are no longer downstairs, though the old, spacious and business like kitchen hearth still exists.

As I make the eight mile journey from here to Fountains Abbey I like to think of the heritage our home shares with this wonderful UNESCO World Heritage site.  Aren’t we lucky? 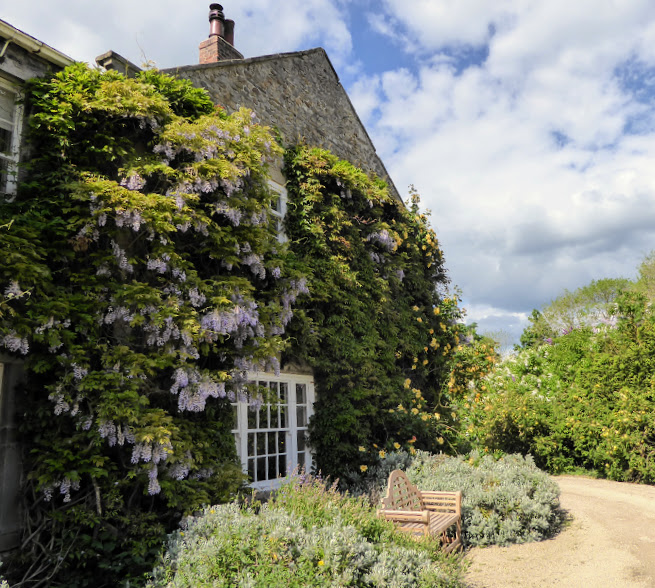 The Old Grange is attached to the fine 18th century house next door. We seem to have access to their wisteria.

This post is in response to the WordPress weekly photo challenge: ‘Heritage’

36 thoughts on “Snapshot Saturday: From World Heritage to heritage at home.”