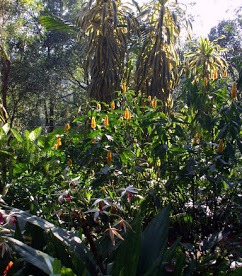 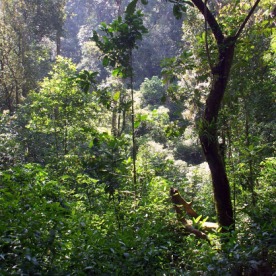 Gurukula: a sanctuary returned to Nature.

Simple food cooked and shared together. 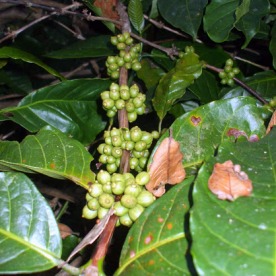 Collecting cup on a rubber plant

Bananas in the pantry

Sunset, sunrise over the Western Ghats. 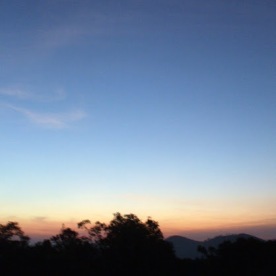 Gurukula is a special place.  For the last forty years it’s been a sanctuary for the rain forest which has suffered massive deforestation in the Western Ghats, causing almost irreparable damage to the habitat of thousand of plants and animals, and to our own ecosystem.  I urge you to follow this link to read all about it.

Our few days in Gurukula were special too.  We wandered freely in the lush grounds, and when nature called, we found a quiet corner- toilets were deliberately under-provided so we all took a part in fertilising the soil.  Meals were taken communally: we all shared the cooking, the washing up, the tidying.

We explored the rain forest, an almost meditative experience with the sounds of water, forest creatures – macaques in the trees, rufous eagles above the canopy.  What wasn’t meditative was the strangler fig. It grows up its host tree, those climbing tendrils thickening into sturdy sinuous branches, which strangle and kills the tree beneath which gave it life, becoming an extraordinary hollow tracery.

We explored the surrounding communities.  During the 1940s, communist Kerala obliged landowners to sell their land cheaply, so all citizens were entitled to buy at a price they could afford.  At first this worked well.  Families worked the land in a diverse way, growing a variety of crops for their own use and selling the rest.  These days – or when we were there anyway – there is a monoculture, with families taking whatever subsidy is on offer to grow the latest crop – till the price plummets.  Tea, coffee, rubber, bitter gourds, bananas have all had their moments of glory before a crash.  Families no longer grow the rich variety that kept them so well-nourished.  90% literacy means people are leaving the land to get work in the cities – call centres and so on.  It doesn’t sound a success story.

The highlight of every day was sunset.  We climbed a vertical and rather scary ladder on the water tower near the house, and then…. simply sat.  We watched enchanted as the sun set over the Western Ghats. As the moon rose, the sky darkened and the stars emerged.  Silence fell.  And then, distantly, we heard two mullahs from two different distant mosques chanting their call to prayer – admittedly amplified by megaphones.  This, together with a cascade of shooting stars, provided one of the most magical experiences of my life. 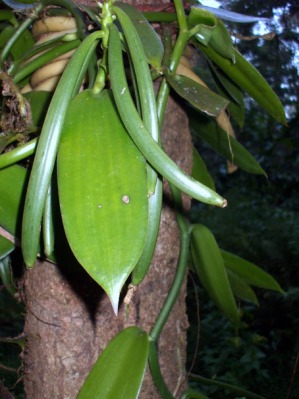 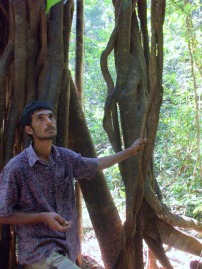 Sandy plans his climb of the strangler fig 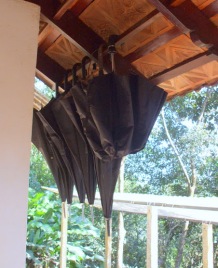 Umbrellas waiting for the monsoon 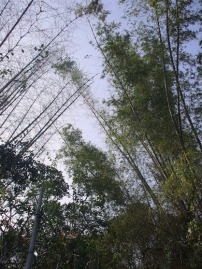 Latex sheets drying outside a cottage 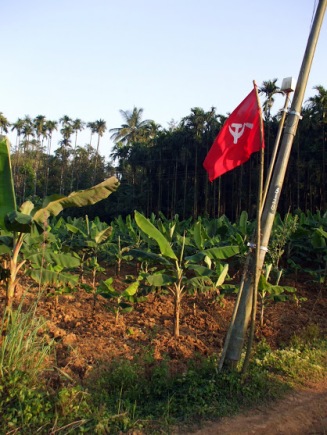 A farmer demonstrates his Communist allegiance

Six Word Saturday: a series of six words before I gave in and wrote …. rather more.

30 thoughts on “Gurukula: a Small Corner of Paradise”