The London Marathon.  Sunday.  The hottest on record.  40,000 runners, 100,000 spectators.  Team Support Ellie, all members of her wider family, split into manageable units to chase from place to place all over the Marathon route to spot her and cheer her along.  Malcolm and I, as the oldest supporters joined up with two year old William and his mum, as Team Slow.

We all had the Tracker App.  All the runners had a device on their shoe to report where they were, and how fast they were going in real time.  100,000 users in London, and thousands more beyond ensured the poor overworked app was often on strike, so we often guessed at her whereabouts as we zipped about over London trying to  get to a vantage point before she did.  WhatsApp messages kept us all in the loop.

We didn’t spot her at the start…… 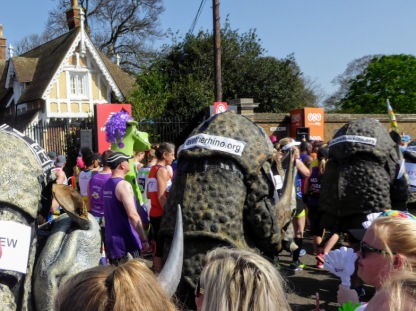 …. but we did spot these rhinos, who amazingly, all completed the circuit.

Which was all a bit disappointing for us, and more so for Ellie, who having trained in sleet and frost wasn’t looking forward to running in the temperatures of high summer and must have thought we’d all pushed off to the pub.

But Tom and Alex reported spotting her at the Tower of London, and sent a picture to prove it.  Team by team we reported our successes – Team Slow finally saw her only yards before she finished. 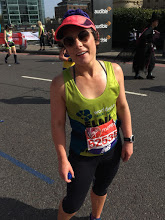 Ellie draws breath at the Tower of London.

She did it.  She got her medal.  And thanks to many many friends – and quite a few of you – she’s smashed her fundraising target to raise over £6000 towards oesophageal cancer research.  She says she’s done her first -and last – marathon.

It’s over. She’s got the medal.