Today’s World Book Day.  I couldn’t understand why there seemed to be no sight of it here in France.  It turns out we Brits are out of step.  Celebrations in the UK are over a month ahead of everyone else’s.  April 23rd may be World Book day for everyone else, but it’s also Saint George’s day, and he’s England’s patron saint.  Apparently he does dragons, not books.

It was the Spanish who first decided to celebrate books and reading on April 23rd, as a way of honouring Miguel de Cervantes, who died on that day.  UNESCO made the connection that Shakespeare, as well as other writers, died or were born on the same day as Cervantes, and a world-wide festival was born.

Children have the most fun on World Book Day, whenever it’s held. Here are my grandchildren off to school this morning.  They had to turn up as a character in a book….. so please meet Harry Potter, and Mr. Willy Wonka. 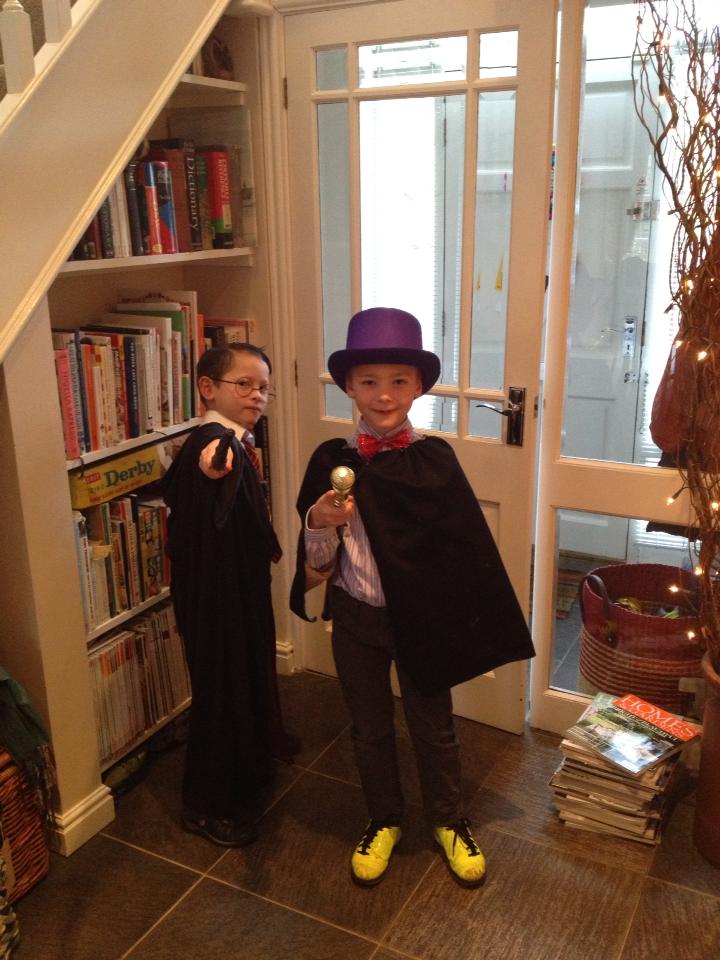 Ben and Alex in character for the day

So many of my best memories of the children’s childhood centre round the books they enjoyed.  That first winter of my daughter Elinor’s life was one of those once-in-a decade toughies.  We were marooned in our house up an icy and snow-covered steep slope on one of Sheffield’s seven hills (‘just like Rome’). It was unthinkable to set foot outside with an unwieldy pram and a tottering toddler. But unable to do the daily round, or see friends, my then two year old son Thomas, my new baby and I simply cuddled up on the sofa. I read with him, and breast fed my daughter for hours at a time. I’d never have chosen such a harsh winter with all its limitations, but it remains one of the golden periods of my life.

Then, as now, the books we favoured had the rhythms and cadences, the witty and lively illustrations of authors like Quentin Blake.

Blake’s Mr Magnolia remained a family friend from the day his story was published in 1980 through the pre-school years of all three of my children.  Any of us will recite his story to you at the least provocation.

Meet Mr. Magnolia. See? He has only one boot.

‘Mr. Magnolia has only one boot.

He has an old trumpet that goes rooty-toot

And two lovely sisters who play on the flute,

But Mr. Magnolia has only one boot.

Young children now are privileged to have world-class illustrators and fine writers available to them for the price of a paperback, or the use of a library ticket.  I’ve just had a high old time remembering old favourites loved by the whole family– Shirley Hughes’ Alfie, Rosemary Wells’ Noisy Norah, Nita Sowter’s Maisie Middleton, Roald Dahl’s heroes (Charlie of Chocolate factory fame) and anti-heroes (The Enormous Crocodile and of course the Twits).  Make friends with any of these characters by the time you’re three years old, and with any luck, you’re hooked on reading for life.  That’s what World Book Day’s for.

Alfie, his friend Bernard and a good book