Over in a tiny village in the Couserans today for a huge lunch – Azinat – with friends, we came across this sight:

It’s an alambic – well two alambics actually.  We knew that, because we’ve seen plenty of these historic pieces of machinery on display in villages throughout the area.  We even know what they’re for: every autumn, villagers still look forward to the annual visit of the alambic man whom they pay to transform the juices from their apples, plums or whatever into the most potent hooch you can imagine: up to 50% proof.  These alambics  showed signs of having been recently used: the tractor next to them still had its engine running.

We retired to our restaurant for lunch.

Three and a half hours later, the meal over, we sauntered over to where we’d spotted the alambics: huge copper contraptions encased in a battered wooden frame.  They were functioning!  Three large rubicund men, the types you can meet in the countryside anywhere, any country, were supervising hooch production, and were very happy to explain everything. 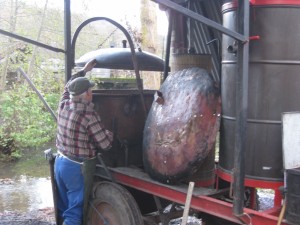 Well, I can’t be sure I’ve got this right.  It’s something like this though.

A fire under the first cylinder heats the juices that are poured into it.

The all-important fire. Note the wheels on which the machine originally travelled

The resultant steam is forced up through pipes, which are cooled by water.  The vapour condenses into alcoholic liquid.  That doesn’t sound quite right to me: I never was any good at science.

Copper lid – parked for the moment.

Anyway, it’s the result that counts.  We met a Dutch couple who’d brought along their plum juice to be processed.  135 litres of juice.  And their eau de vie was now almost ready for them to pay for and take away.  Their 135 litres had become …. 10 litres. 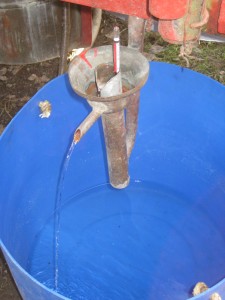 They didn’t yet know what they were going to be charged.  But they had been told they’d have to fill in a lengthy document for the tax office, and pay a suitable levy for this astonishingly potent product.  We know for a fact it’s strong stuff.  There were the dregs in a large plastic container.  They invited us all to dip a finger in and taste it.  We did.  And I promise you – just licking a fingerful probably put us over the limit.

We felt as if we’d witnessed a real piece of history.  When these men retire, are there young people around who will follow in their footsteps?

This alambic’s probably good for very many more years

* And if you don’t know Heath Robinson, click the link

6 thoughts on “If Heath Robinson* only knew”