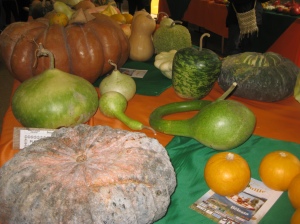 Go to any veg. stall on a French market just now, and there’ll be at least one giant pumpkin.  The stall holder will sell you a portion if you like, using a hefty cleaver to wrest a kilo or so of orange flesh from this magnificent vegetable.  The market’s probably got at least one stall devoted to nothing but pumpkins: Turk’s head, musque de Provence, butternut, red kuri, rouge vif d’Etampes………

It’s not so very long ago in England that I’d be doing the rounds of all the supermarkets, the day after Hallowe’en, gathering up the last few Jack o’Lantern pumpkins at bargain-basement prices.

Jack o’Lantern dressed up for Hallowe’en

They’d been stocked for everyone to make their scarey Hallowe’en pumpkin faces with and that was all.

Hardly anybody used them to cook with (presumably not even the many Americans who live in Harrogate, with their apparent love of pumpkin pie), and Hallowe’en over, the unsold ones would be junked.

Hugh Fearnley-Whittingstall et al have put paid to that, and now the English love pumpkins as much as the French always have.

Here’s an easy and long-established soupy stew from round these parts (though I learned about it from Nigel Slater) to warm you up after a chilly day in the Great Winter Outdoors.

Hmm. We made short work of that.

When we first tasted it, we thought it nice enough, not earth-shattering though. It’s grown on us, and now we think it’s comfort food par excellence: especially those pillows of bread, soaked in scalding hot flavoursome juices.

Toast thick slices of bread- preferably sourdough, and layer them up in a casserole or slow cooker with fried onions, garlic, marjoram, sliced skinned tomatoes, and thin slices of pumpkin.  Top the dish up with seasoned water and olive oil and bake for an hour or two in a slow oven (or most of the day in a slow cooker).  Take the lid off the dish for the last half hour or so and return to the oven with a crust of grated cheeses (parmesan is good to include in the mix, as it provides a welcome crispiness) for the last half hour or so.  Or grill for a few minutes if you’ve been using a slow cooker.