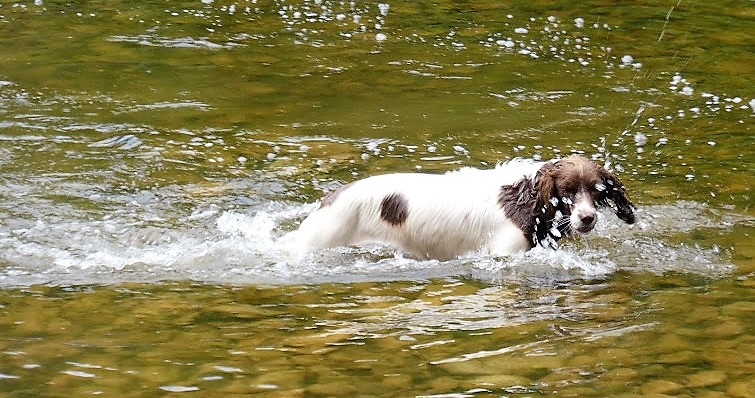 Some of you may remember my first post this month, when I announced my plan to acquire a Virtual Dog to make sure I went walking every single day, come rain, come ice, come mud. My chosen companion was Dilys, shown in today’s feature photo, but she already walks miles every day with her own family. Much as I love her, I think I really do need a Virtual Dog.

Then I remembered Ai Wei-We’s Circle of Animal Heads at Yorkshire Sculpture Park. Surely that featured a dog’s head? Up a pole? It did. Here is my Virtual Dog. Sadly, it’s my least satisfactory photo from there, so I’ll include a small gallery of some of the others to give you a better idea of this circle of mainly Zodiac figures up above your head.

I’ve completed 116 miles this month. I felt this was a decent number – nothing to upbraid myself with here. But then I discovered that Jo of Restless Jo and Jo’s Monday Walk fame has upstaged me. She does eight miles a day. Almost every day. I’ll have to up my game.

Thank you, Becky, for cheering up a particularly long and dismal January: for giving us the opportunity for uplifting friendships in the blogosphere, and for making us crank our brains up a gear as we tried to measure up to the skills, humour and ingenuity of our fellow participants.

Suddenly, autumn is almost over. Those rich burnished leaf tones of copper, gold, brass, bronze and rust are all but gone, released onto the woodland paths beneath the trees. It’s that final burst of colour that we love to celebrate: so how odd of me to choose trees as my subject for Jude’s Photo Challenge this week, where she invites us to look at shadow and texture in black and white. I thought it might be fun to allow craggy, nubbled trunks and bark centre stage, and to contrast them with the leaves, glossy this autumn from the rain that’s so often beaten them to the ground beneath the trees where they’ve been since spring time. And at the end, just a couple of trees reflected in different ways, at the Yorkshire Sculpture Park.

The High Ride at Fountains Abbey and Studley Royal

Two from the High Ride at Fountains Abbey and Studley Royal. The last image was taken a Kiplin Hall

This is your introduction to YSP. ‘Pelvis’

No, it’s Not Vital to visit the Yorkshire Sculpture Park on a perfect Autumn day, when the trees are at their burnished best, flaunting their chromatic colours just before the November squalls tug down their rusty leaves.  It’s Not Vital at all.  But it’s a brilliant way to spend a Sunday.

Bretton Hall and its surrounding parkland.

Some exhibits – particularly by those two sculptors who grew up so near to Bretton Hall, Henry Moore and Barbara Hepworth, are semi permanent.  But most artists shown there exhibit for a season or so, and you’ll find their works placed all over the extensive parkland: on the lawns, overlooking the lakes, waiting to be discovered on a woodland walk. Art appreciation combines with views across the distant Pennines, and a good healthy work-out across shady woods, formal lawns, lakes, pastureland and country bridle paths. 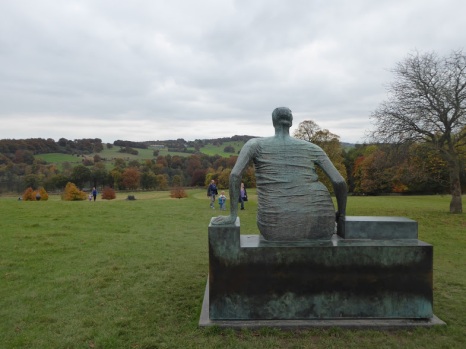 And I’ve been teasing you.  Not Vital is the name of one of those sculptors exhibiting at the moment. It’s his work ‘Pelvis’ that greeted us as we came into the park.

He was raised in a remote part of the Swiss Alps, and developed a strong affinity with nature.  Much of his life has been nomadic, and he engages with the artisans he meets on his travels to create works from local materials, pushing known technologies to the limits.

Here’s The Moon, a highly polished stainless steel sphere which reflects the environment it’s placed in.  Those craters are based on photos of the moon, and individually produced by Beijing craftsmen.

And here’s Hanging and Weighting, an unsettling plaster and steel construction that surely, surely is about to slide to the floor?

Not Vital: ‘Hanging and Weighting’.

I wish I’d taken more photos of his arresting and thought-provoking works – such as his self-portrait as a North Korean peasant, which is blank and faceless.

A taster of more on offer yesterday.  Here’s KAWS‘ Small Lie, a dramatic and monumental wooden sculpture of Pinocchio.

….. that’s if we haven’t tripped over Hemali Bhuta’s Speed Breakers – bronze tree roots conceived to be stumbled upon as we explore the woods.

Come and have a virtual tour of the park.  And if you get the chance, visit the real thing. 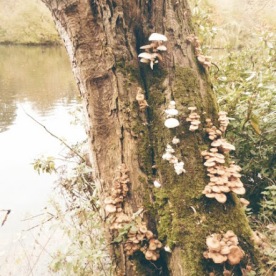 A fungus-colonised tree near the lake. 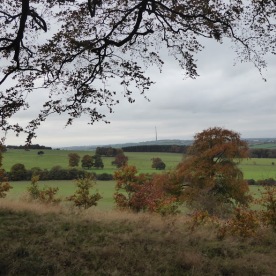 A view of Emley Moor transmitting tower from the woods. 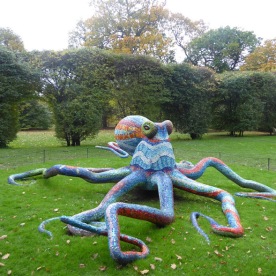 Parkland at YSP with distant sculpture.