The other day, we had French friends to dinner.  They bravely agreed to curry.  I thought I ought to check beforehand: the French – round here anyway – are curiously resistant to the fiery charms of the chilli plant, and hot spices generally.  They shouldn’t have worried, and neither should we.  They cleaned their plates and came back for more.

Having assaulted their palates with unfamiliar flavours, I wanted to make something rich and soothing to round off the meal.  And I remembered that, back in England, my friend Barbara had recently treated us to lemon posset.  It’s been around a few centuries, and was by no means a new recipe when Samuel Pepys had it for supper back in the 17th century.

At once palate-cleansing and luxurious, it’s so simple to make.  And when your guests ask for the recipe, you know you’ve struck gold.  Here it is:

500 – 600 ml. double or whipping cream (crème fleurette).  The quantities aren’t crucial.  Use a couple of pots of what’s available.

Remove from the heat and pour in half the lemon juice whilst stirring the mixture thoroughly. It should start to thicken instantly. Taste the mixture and if its not quite tart enough for your tastes then put a little more juice in. It should be tangy but still very rich.

Allow the posset to cool for approximately five minutes and then pour into 4 glasses, coffee cups, or any small, pretty containers. The posset will start to visibly thicken as it hits the cool glass or porcelain. Cover and chill in the fridge for at least 3 hours. The posset should be quite firmly set.

Serve with lemon shortbread or other biscuits of your choice, or a fruit coulis.

This morning, we were busy in the courtyard. The final tomatoes needed harvesting, and the woodstore needed to be tidied and sorted for that all-important wood delivery before the cold weather sets in.

How can you concentrate though, when something as beautiful, as busy, and as graceful spends the morning hovering over your sage plants? 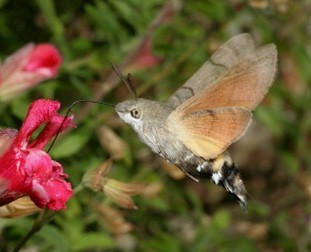 My camera wasn’t up to the job of recording those wings in constant fevered motion, so this image comes to you thanks to the BBC

Tell most Ariegeois that you’re going to Andorra, and they’ll assume you’re popping over to stock up on hooch, cigarettes, cosmetics and cleaning products, then fill the car with as much petrol or diesel as it’ll hold.

The Principat de les Valles de Andorra is a little historical oddity.  It’s a Catalan speaking independent country, only 468 square km., slap in the midst of the Pyrénées between France and Spain.  It was, since 1278, co-ruled by the President of France (as the Count of Foix is no more) and the Bishop of La Seu d’Urgell in Cataluña.  In odd numbered years, France receives tribute money, and in even-numbered years, the Spanish bishop calls in 900 pesetas (or the euro equivalent, I suppose), 12 chickens, 6 hams and 12 cheeses. 1n 1993, the Andorrans voted for democracy and a constitution- but those tributes still get paid.

What makes Andorra popular, here in the Ariège as elsewhere in France, is its lack of taxes.  Petrol therefore costs something like 40 cents a litre less than in neighbouring France, and you can buy 3 new car tyres for the cost of two here.  And so on.  So Andorra’s border towns are nothing more than huge unpleasant shopping malls, blighting the slopes of the wilderness Pyrénées on which they’re situated.  The capital city, Andorra le Velle, and the surrounding towns which have become its suburbs, are given over to little other than retail therapy.

In other words, not really our cup of tea.

Andorra, though, offers so much more.  Zig-zag up the narrow mountain roads only a few kilometres away from the capital, and you’ll be alone amongst grand peaks, dense forest and craggy paths.  Apparently, the further you travel from the capital, the wilder and more spectacular the scenery becomes.  Tiny villages remain undefended by castles: the circumstances of its past government meant castles were forbidden.  But charming Romanesque churches, often with original frescoes, are common throughout the country.

Henri and Brigitte invited his cousin and wife and us, to join them on a mid-week break at an Andorran hotel they’d chanced upon a few months ago.  Henri doesn’t do bargain basement, so we were surprised when he told us that full board at this 3 star hotel was 51 euros each.

Hostal La Font is in a tiny village, Os de Civis, clinging to the mountain side not, as it turned out, in Andorra at all.  It’s in Spain.  But it might as well not be.  The one road serving the community connects the village to Andorra la Velle and to nowhere whatsoever in Spain.  Out of season, 20 people live there.

It was busy when we checked in to the hotel though, just in time for lunch.  Vegetarians need not apply.  Before the meal, tomatoes, garlic, olive oil, dried sausage, olives all appeared on the table.  Then a hearty meatball-cabbage-chickpea-potato soup arrived.  Then a selection of salads and charcuterie.  Full yet?  I hope not.  There’s grilled lamb and 3 different sorts of grilled sausage with baked potato, and a large choice of puddings to come.  The secret of course is to help yourself to tiny portions of everything offered: that’s what I did anyway, because I knew there would be a 3 course meal in the evening, and Henri has a way of making sure that nobody does their own thing by skipping dinner – or even a course.

Anyway, after lunch, we all chose to stride forth into the mountains.  Henri’s cousin, Jean-Claude, has been a lifelong farmer, and made a great walking companion.  We learnt from him the grasses that any discerning sheep chooses, given half a chance.  He showed us how the local cows, a Swiss grey breed, have narrow agile hooves and legs to enable them to cope with climbing up and down the steep slopes of their summer pasture.  And he told us tales of transhumance: the days in spring and autumn when cows and sheep are taken up to high pastures for the summer, and down again in winter: for his sheep, each journey took three days.

Later, we explored the village.  Just as well the streets are equipped with handrails.  Steepest village I’ve met.  The dark local stone is the picturesque material both houses and streets are built from.  It might look pretty in the September sun, but life looks tough here, and I’m not surprised the village all but closes once the tourists go.

We’ll be back.  A walking week or so in these wild and empty mountains is a must, and hotels are affordable.  Anyway, the car needed 2 new tyres, and the money we saved by buying in Andorra all but paid for the holiday.

……….. gathered this morning, just in time for lunch.

Last year was a first for us at Le Jardin Extraordinaire. This weekend, we were back, and we’ll be back next year too, and every year.

The members of Artchoum enjoy growing flowers, vegetables, plants of every kind. They relish creating beauty, fun, intrigue, from anything – a discarded table becomes a woodland creature, an ancient trainer a Grumpy Old Man, a few stones in the river a symbolic gathering.  Professional artists work alongside interested members of the public for months and weeks beforehand just for this one weekend in September.

And we all turn up, in our hundreds, to explore this very special walk through woods, or along the shaded river bank, in this normally secluded spot.  Families, couples, groups of friends all come to share the atmosphere –  friendly, fun, joyful, peaceful, reflective.  Have a look at the photos, and enjoy the walk too

We spent last week in Italy, Lago di Garda to be exact.  We joined daughter No. 1, her husband and twin boys for a camping holiday. It  was all we hoped for: time simply to enjoy being together; breakfast, lunch and dinner all eaten outside; the easy transitory friendships of campsite life; splashing in the pool with the boys; rowing or swimming – rather badly – in the lake; and the pleasures of small-town Italy – people-watching as we sat at some street side bar or restaurant with an ice cream, beer, or plate of pasta, and  exploring charming back streets or ancient churches.

Malcolm and I had it best though.  Not for us the tedious wait in crowded airport departure lounges for the journeys there and back.  We drove through France and Northern Italy, and had a taste of regions we didn’t know, but plan to know better.  Here’s a slide show of some of the places we saw: the Alpes de Haute Provence, little known gems such as Cremona, where Stradivarius came from, the Mercantour and Luberon National Parks. Best of all was a day spent in Mantova (Mantua).  Unlike Florence or Rome, it’s on few tourist itineraries, so it’s unspoilt, uncluttered.

It’s a town whose prosperous Medieval, Renaissance and Baroque mercantile past is told in every street in the city centre, as piazzas, churches and fortified buildings crowd together demanding attention.  The old city is surrounded by waterways which once were swampy rivers, were then extended and widened for defence, and are now pleasant open spaces for pleasure boats, wildlife, fishermen, and people who like us, simply wanted a cool walk at the water’s edge. Go there if you ever have the chance.

Just in case you think we had a totally idyllic week, you might like to know that on the way home, Saturday night in our particular bit of northern Italy proved to be a hotel-free zone.  The nearest we came to finding a bed was when I went to check out a faintly unpromising looking albergo in some very untouristy town.  I scuttled away when I realised it was certainly the local brothel.  We slept in the car.

Just now, as September begins, the vegetable patch is at its most productive.  The beans, the cabbages, the tomatoes, the new potatoes……  It’s all so very satisfying…apart from one thing.  Courgettes.  They never give up.

It’s a far cry from a few weeks ago, when the flamboyant yellow flowers first announced the appearance of just a few of those tiny delicately flavoured green fingers, waiting to be celebrated as the centrepiece of a light summer meal.  Exciting times.

Now they’ve become something of a trial.  Day after day we courgette-farmers haul dozens of the things back to the kitchen. We comb recipe books and scour the net, seeking yet more inspiration.  I think we have to support each other.  It’s time for every blogger with a veg. patch or allotment to offer inspiration to us all.  Even if you normally write about politics, music or the vagaries of the fashion industry, you and your ideas are needed as a service to the whole courgette-growing-community.

Here’s a recipe to start things off.  This dish is good as part of an Indian-style meal, or as a complement to, say, simply grilled meat.

Courgettes cooked in pickling spices: a recipe from Hyderabad.

Heat the oil in a deep pan and temper with the pickling spices.  Reduce the heat and add the turmeric, chilli and ground coriander.  Sauté for one minute and add the tomatoes. When the mixture has thickened, add the courgettes and season to taste.  Cook till the courgettes are soft. Just before the end of cooking time, add the ginger, chillies and Kashmiri masala.  Garnish with fresh coriander and serve.

Both the pickling spices and Kashmiri masala can be made in batches and used as required.  They’re useful additions to the store cupboard if you enjoy Indian food.

Grind to a powder and keep in an airtight container

Actually, though, we’ve just come back from a week in Italy. That’s far more exciting, so…….to be continued in our next