For a while now, Yorkshire for Europe groups have been getting down to London once a week to support Steve Bray of SODEM, and demonstrate peacefully outside Parliament. Week by week, the Great Yorkshire Songbook has evolved, featuring such memorable numbers as ‘We’re down from Yorkshire just to say…’ to the tune of -what else? ‘On Ilkley Moor baht ‘at’, and ‘Why, why why Theresa?’ to the tune of ‘Delilah’. Cornwall for Europe does much the same, but they have a great tradition of sea shanties to draw on for their songbook (‘What shall we do with this rotten Brexit?‘).

Adrian from North Yorkshire for Europe threw down the gauntlet to Cornwall. The Great Yorkshire/Cornwall sing-off. Challenge accepted.

On Monday, two coaches arrived in London. One from the north, stuffed not only with Remainers in good voice, but Yorkshire flags by the dozen, European flags, Union flags, placards, and Mark’s tuba. Oh, and seven students from Sheffield University, hitch-hiking to Transylvania for charity, via our demo. And a coach from the south-west, idem, except that they had black-and white Cornwall flags and placards, and a Cornish bagpipe instead of a tuba. And no students. 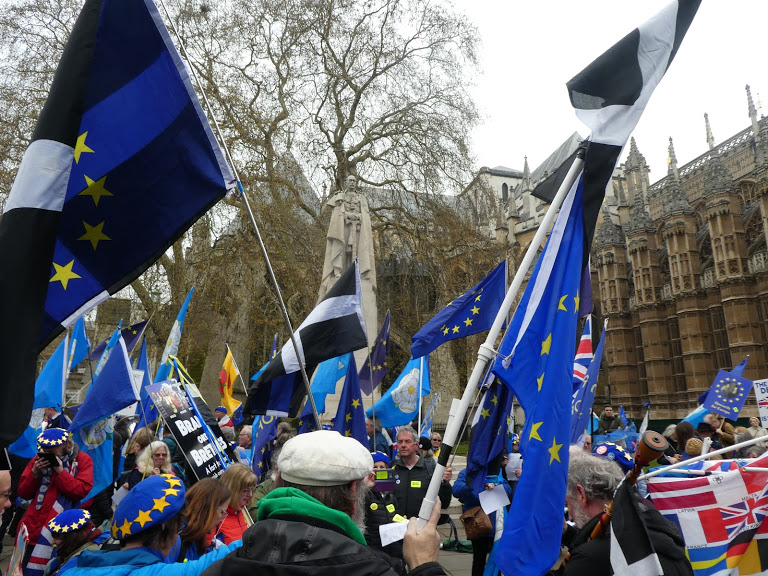 Cornwall and Yorkshire together.

And outside Parliament, we sang. We soon learnt each other’s songs, and we sang, sang, sang. Alistair Campbell came for a while with his bagpipes. Our MEP Richard Corbett came and joined in, so did Huddersfield MP Barry Sheerman, and Lib Dem Tom Brake, who brought chocolates too. 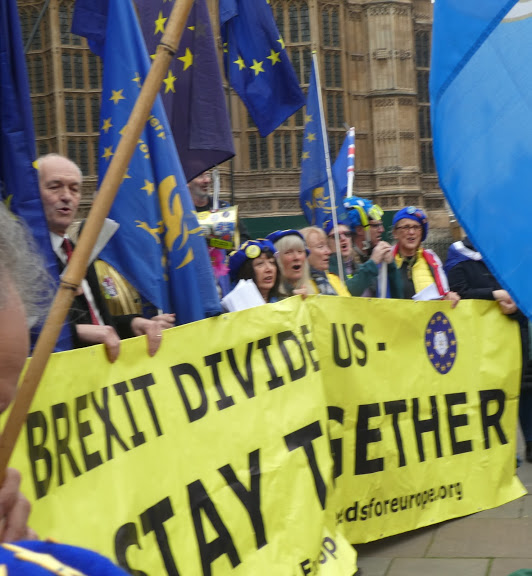 Steve Bray, that stalwart who protests all day and every day, whatever the weather joined in the fun, and was invited to judge the two choirs. ‘52% for one, and 48% for the other!’, suggested some wit in the crowd. Steve was far too polite, and suggested a draw. Team Yorkshire thought that Cornwall had the best tunes, and were more tuneful, but we were LOUDER.

Steve Bray. And his megaphone. 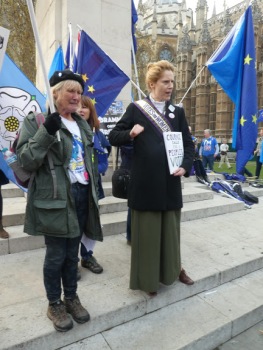 We were even joined by a suffragette….

And at 6 o’clock, we followed Steve’s daily tradition. We trooped after him and his mega-megaphone and bellowed People’s Vote slogans as loudly as possible across to the House where members were about their daily business. If you’d been watching the BBC 6 o’clock news at 6.11, you’d have seen us. And again at 10.00. A friend in Cardiff spotted us on the Welsh news.

Cornwall and Yorkshire united in protest.

During the day there were interviews with Norwegian radio and French TV (Arte is doing a full length documentary on Britain and Brexit, and have been filming in the area for 10 days).

Just one more job to do before the long journey home. Get along to the press hub, and be there while Channel Four does its daily interviews on its 7 o’clock news. More flag waving, shouting and singing, and a bit of trespass onto the lawns with a placard by Steve Bray.

The press zone. Can you spot Steve Bray trespassing? Look for the placard.

We met Londoners, tourists, people from around Europe who’d made England their home and no longer feel as welcomed as they used to. We’ve had our photos taken, had discussions with dozens and dozens of passers-by. Does it make a difference? We don’t know. But we know we brought cheer to so many people who like us, hope that Brexit is not a Done Deal.

27 thoughts on “The Great Yorkshire/Cornwall sing-off”