Heavy rain in Mamallapuram. My last view of the town, and this calf trying to shelter, just before I caught the bus to Chennai.

I quite forgot that I had already written in July about how my journey from Mamallapuram, via Chennai, to the airport then home to England was severely curtailed by my Indian Adventure ending up in a hospital stay.

My rickshaw driver in Chennai: after that – a train ride … and an ambulance ride.

What picture have you got of an Indian Hospital? I bet it’s wrong. My ward at Sri Balaji Hospital resembled pretty much any ward in an older-style British hospital that you may have come across – only cleaner. It sparkled with clean paint, fresh blue and white candy-striped sheets and general good order. 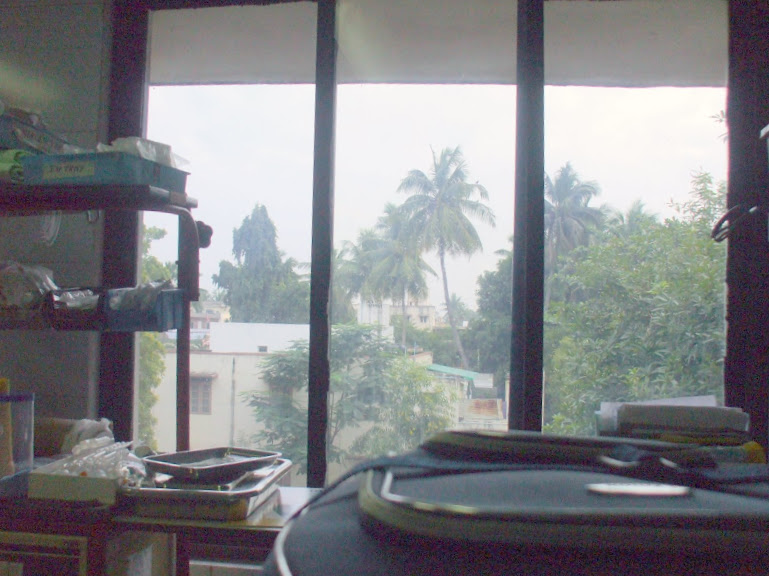 View from my bed in Sri Balaji Hospital, Chennai.

There were four beds in my  unit, and it really surprised me that there were both male and female patients.  This is a country where I had quickly learnt that it was not OK for me to sit next to a man on a bus, yet here I was in the much more intimate setting of a hospital ward, right next to one man and opposite another.  We were looked after by two nurses at night and two by day, all in smart white jacket-and-trousers uniform. The nurses, being Tamil, are of quite astonishing physical beauty: I really couldn’t take my eyes of ‘my’ night nurse, Jhoti, whose loveliness extended to her personality.

They appeared equally taken with me, and would pat and stroke me, or chuck me under the chin at the least provocation. As I started to get better, they amused themselves teaching me Tamil. With one exception, they didn’t speak much English, but what they did know, they’d learnt at Nursing School. Phrases like ‘Go to the toilet’/’Use the bathroom’ etc. were not understood, until light dawned. ‘Ah! You want pass urine?’

Besides nurses there were:
– Nice ladies in saris who appeared to fulfil some kind of auxiliary role.
– Doctors – lots.
– Men in blue jackets and trousers who seemed to be gophers, called Ward Boys.
– Men in brown, ditto – porters.

Dili and friends, the Ward Boys at Sri Balaji Hospital

The night nurses did twelve hour shifts, just like many of their counterparts in British hospitals. Before you feel too sorry for them, they told me that when doing night shift, they work just 10 nights a month.

Medication and tests of all kinds flowed freely – they make the pill-popping French look amateurs.

No TV, no radio, no nice ladies from the WRVS dispensing sweets, newspapers and library books. No getting up either. You lie in bed until you’re good and better, and meanwhile you do nothing. I was caught attempting to wash in the bathroom on my last day, and was chivvied back to bed and given a bed bath.

At visiting time, those of us without visitors did not go without attention. Dozens of noses were pressed against the glass wall of the ward as curious onlookers gave us all the once-over. I felt a bit like an inmate of Bedlam in the 18th century.

When I was discharged, I had a bill to pay of course: one which, together with my altered journey arrangements, would eventually be settled in full by my travel insurance (there’s a moral there.  Though they made a big fuss that I hadn’t got in touch with them from the hospital.  I told them that on a busy ward, I’d been able to make just one call – and that wasn’t even to my husband).  I was utterly terrified of what horrendous sum might be taken from our bank account for my three day stay.  I can’t remember exactly what it was.  But it was in the region of £30.

So that was it.  Feeling still pretty ropey, I had secured an internal flight back to Bangalore, and after an interminable wait through the middle of the night in a draughty luggage hall, an onward flight to London, and later, back home.  Where, apparently, I barely spoke for three days.  But I made up for it later.