It’s that time of the month: the time when I reblog a post from our years in France.  This time, I’m celebrating our much-missed garden friends the lizards. I do wish they’d consider a move to North Yorkshire, if only because back in 2012, I had nowhere near mastered the art of getting a decent photo of them.

Summer’s arrived: well, this week anyway.  So from before breakfast until long after the evening meal we’re spending as much time as we can out in the garden.  And we have plenty of company.  Lizards.  Common wall lizards, podarcis muralis.  They are indeed spectacularly common here.  We have no idea exactly where they live, but there are plenty who call our garden ‘home’.  We’re beginning to get to know a few.

Easily the most identifiable is Ms. Forktail, she of the two tails.  She’s the only one we’ve been able to sex conclusively as well, because we caught her ‘in flagrante’ with Mr. Big behind the gas bottles recently.  And then the next day she was making eyes at a younger, lither specimen, and the day after that it was someone else.  She’s lowering the moral tone of our back yard.

Then there’s Longstump, who’s lost a tiny portion of tail, and Mr. Stumpy, who hasn’t got one at all, though it seems not to bother him.  Redthroat has a patch of crimson under her chin.  There are several youngsters who zip around with enthusiasm and incredible speed.

In fact they all divide their time between sitting motionless for many minutes on end, and suddenly accelerating, at top speed and usually for no apparent reason, from one end of the garden to the other, or vertically up the wall that supports our young wisteria. On hot days like this  (36 degrees and counting) they’ll seem to be waving at us.  Really they’re just cooling a foot, sizzled on the hot wood or concrete.  Sometimes you’ll see them chomping their way through some insect they’ve hunted, but often they’ll step carelessly and without interest over an ant or other miniature creepy-crawly in their path.

Mainly they ignore one another, but sometimes there are tussles.  These may end with an uneasy standoff, or with the two concerned knotted briefly together in what could scarcely be described as an act of love.

We could spend hours watching them, and sometimes we do.  But there is still a bathroom to build, a workroom to fit out, and a pergola to design.  The kings and queens of the yard have no such worries.  They can do anything: they choose not to. 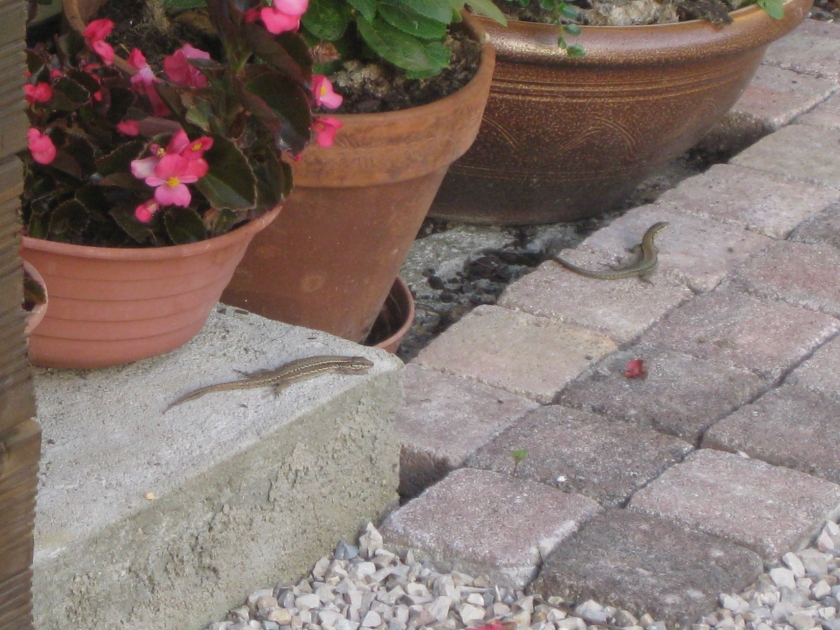 ‘Our’ lizards on their personal sunloungers.

22 thoughts on “Revisiting our Lizards”