On my way to yoga last Friday I was stopped in my tracks.  There, high above me was that unmistakeable raucous calling that only flying geese can deliver.  I watched, as ever transfixed by the cooperative and graceful weaving flight of these birds.  They maintained their traditional V shape as they journeyed on, but I realised they weren’t constantly following the same Top Goose.  First one, then another would fly forwards, only to be succeeded by another, only moments later.  Always, however, they remained connected, a purposeful team. 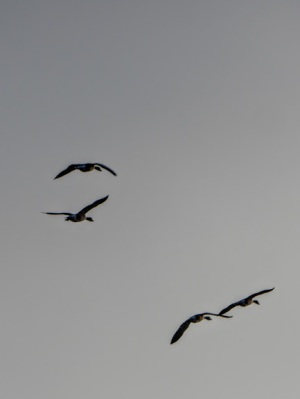 I saw these geese at Marfield Wetlands exactly this time last year. Disobligingly, they did not formed perfect Vs for me.

Later, lying on my back in the yoga group, I glimpsed a red kite, wheeling and diving directly above the skylight.

These photos were taken this time last year.  I still have no camera….

Ragtag Tuesday.  It’s  still there.  As is Ragtag-every-other-day-of-the-week. Have a look.  But I’ve moved to Saturday’s Ragtag Daily Prompt.

15 thoughts on “Bevies of birds”