We went to the hospital today, to buy some wine. Yes, that’s right …. let me explain.

In 1573, an exceptional young man, Julius Echter von Mespelbrunn was elected Prince-Bishop of Würzburg. He was well-connected and well-educated. By 1582 he had founded the University of Würzburg, which flourished and became a model for other seats of learning.

He was a skilled administrator who reduced taxes, improved the economy, and the administration of justice (unless you were thought to be a witch or a jew: he fought hard for the purity of the church as he saw it).

But he had a lasting monument, aside from the University, and that was the Julius Hospital. Here is the legend.

When his niece married, he sent her a present: a casket, and three valuable fruits – lemons – symbolising the bitter, hard lives so many had, in contrast with her life of ease. Disgusted, she sent it back. He returned it. Three times in all. Then he gave up.

Silly young woman. Had she opened the casket, she would have found the deeds to lands and vineyards guaranteeing solid riches in perpetuity.

Julius used these riches rejected by his niece to found a hospital. This hospital was open to all citizens, rich and poor. It includes a poor house, an orphanage, an old people’s home. His clever investments have allowed the hospital to continue into modern times, though now it is a state-run institution.

But it has a restaurant, and it has a shop where the wine produced in its vineyards may still be bought. And that is where we went today, and tried a few samples before buying a few bottles. ‘Zum Wohl!’ 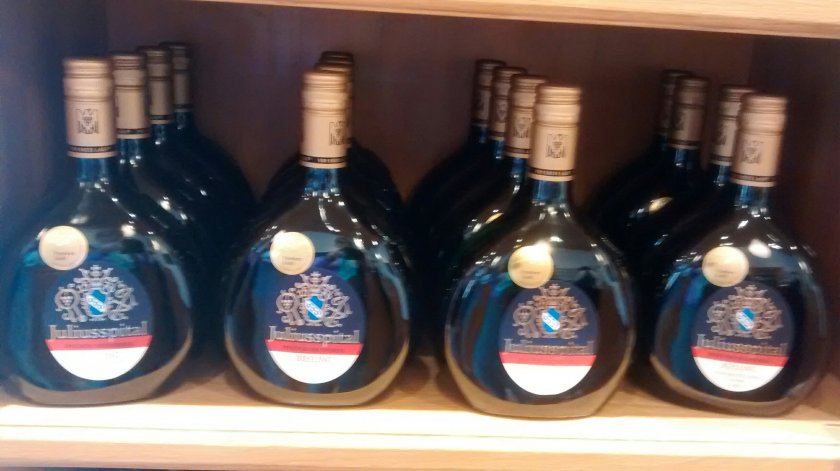 14 thoughts on “A day at the hospital, and a Prince-Bishop.”