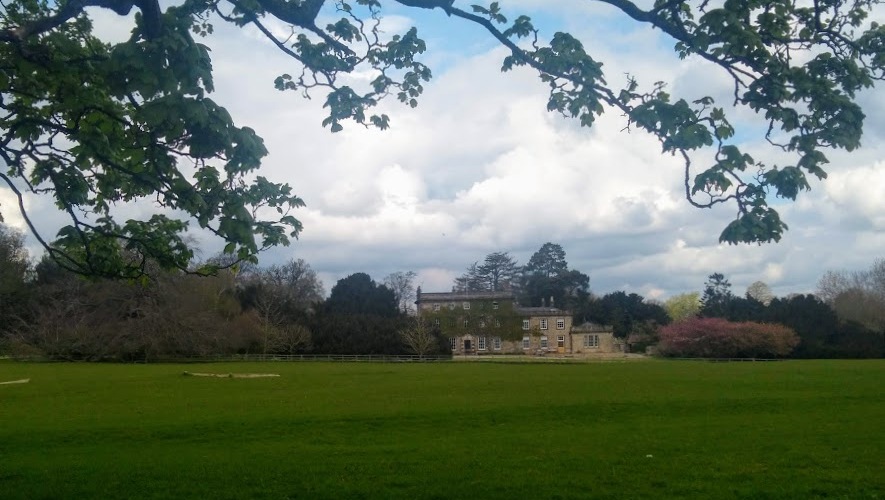 On the last day of April, I took myself for a short walk, from country house to country house near me. They’re all called Sleningford-something-or-other – Old Hall, Hall, Grange – in memory of the village of the same name that was ravaged by marauding Scots in the Middle Ages, never to be seen again. Though they had older antecedents, all these buildings are from the eighteenth and early nineteenth centuries, and they all mark pleasant pauses in our walking routines. Here’s the gatehouse to the first, Sleningford Old Hall, its window enabling the gatehouse keeper to keep his eye on all the comings and goings into the estate. Well, the last actually. I’m showing my last photo first, and working back towards home.

Only the upstairs windows of the house itself were visible over the high wall which maintains the owners’ privacy.

A mile or so beforehand, I’d already passed Sleningford Park and Hall. You can see the house set in its parkland in the feature photo. The conservatory has glass enough, and the gatehouse too has windows pointing in every direction to help the gatekeeper do his job.

I’d started from home of course, less than a mile before that. Not that we live in the house you see here. But we’re lucky enough to live in its grounds, in a rather simpler dwelling, which has its own long history – that’s for another day.

This is a multi-tasking post. It responds to Brian-at-Bushboy’s Last on the Card Challenge; to Ludwig’s Monday Window; and to Jo’s Monday Walk.

60 thoughts on “A window on our local country houses”