‘Redoubt’ tugs cargo-laden barges down the Thames. The river is as much a busy highway as it ever was.

I had to be in London, because it’s not every day my son gets a chance to sing in the Royal Festival Hall. Admittedly, he was only one of some 400 singers from Lewisham Choral Society and the Hackney Singers, who’d combined to perform Bach’s B minor Mass.  What a privilege to hear so many voices give such a finely tuned and moving performance.

The other treat was that I was seated between my daughter-in-law, and a new friend made entirely thanks to blogging.  She’d discovered my blog after following up a comment I had made on the wonderful ‘Spitalfields Life’.  She commented – often – on mine, and eventually we met. I do like this blogging malarkey.

London, as seen from dry land the start of my journey. 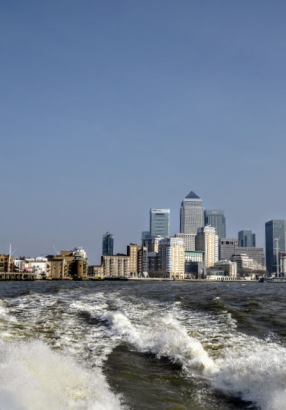 …. which changed to this, as we started, ploughing through the water at a busy fast rate. 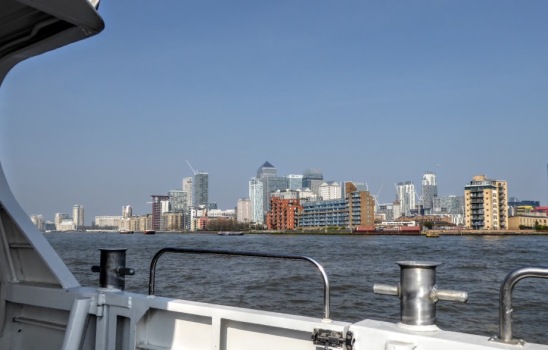 Views from the deck.

Anyway, I got to the Festival Hall from Greenwich by way of a commuter trip along the Thames.  And on this journey I got a sense of densely packed communities, sometimes in tower blocks; and of the densely packed offices of Canary Wharf and the City.

Something old, something new ….

I saw too the Docklands area, where once tobacco, ivory, spices, coffee, tea, cocoa, wine and wool were unloaded from densely packed ships along the quayside to be processed in wharfside buildings – once busy, crowded industrial sites, and now transformed into desirable apartments and businesses.

Once a busy hive of industry, these wharfside buildings are now dwellings for people who would never have chosen to work there.

I saw the Tower of London, with the city behind showing itself developed in a manner unimaginable to the many unhappy souls who entered, never to return to life as they had known it …. or to life at all.

The Tower of London, with the now almost equally famous Gherkin behind.

This journey is a treat which some lucky Londoners can enjoy every day as part of their regular commute.

My response to this week’s WordPress Photo Challenge: ‘Dense’

31 thoughts on “Snapshot Saturday: a view of densely-packed London from the River Thames”