I have another blog apart from this one. My other site records some of my family’s history, in a rather anecdotal fashion. Its readers are mainly not the same people as those who read this one. So just for once, I’m going to share a post from ‘Notes on a family’. I love my Great Aunt Blanche’s autograph album from 1903. I think you might too.

Notes on a family 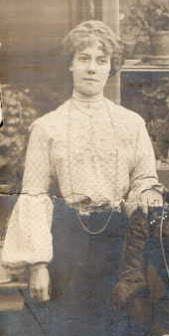 Blanche Pickard in about 1903.

Among my family treasures is an autograph book, dating from about 1903.  It has no signatures from the famous, or even local notables.  Instead, it’s a record of young people enjoying themselves at the turn of the 20th century.

The book belonged to my grandmother’s sister, Blanche.  In 1903 her father Arthur was a clothier’s salesman, and she was a tailoress, a machinist.  Most of their friends worked in the textile industry in some capacity.  They were ordinary working people, and not educated to a high level – though she and her sister were still at school at the ages of 12 and 14, according to the 1891 census.

Blanche and her friends had autograph books.  They sometimes amused themselves in their spare time by filling the pages of each others’ volumes.  Here’s hers.  I’ve left out all the pages that simply had improving quotations from…

6 thoughts on “‘May I have your autograph?’”