When hiking in Korea, it looks as if you need an objective. There and back to see how far it is won’t do.

So yesterday we became Korean hikers for the day, and followed upward, ever upwards the path to Nammaetap, the Brother and Sister Pagodas.

This is the story. Back in the days of the Shillas, a monk living in a cave right here in the mountains found a tiger who appeared before him in agony, with a bone in his throat. Of course the monk helped him. Days later, the beast reappeared with a thank you offering. A beautiful girl. The girl said the tiger had snatched her away from her marriage ceremony. The monk sent her home, but too late. The wedding had been cancelled.

The pair agreed to live as brother and sister, and devoted their lives to the service of Buddha. They passed into Nirvana on the same day, and are remembered in these two pagodas, situated high above the temple at Donghak-sa. This is one of the few monasteries in Korea where you will find Buddhist nuns.

Even without the story to entice us upwards, this was a wonderful, tough walk through woodland, along streams, up a steep rocky path to views at the top from those two pagodas. 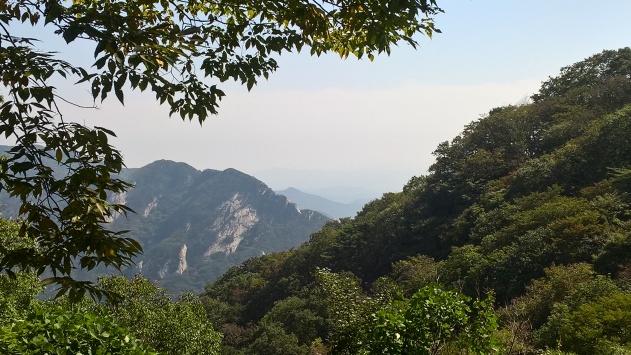 12 thoughts on “A tiger, a monk and his nearly-bride”