No it’s not.  But before we went there last week, we were inclined to agree with Noel Coward’s judgment.  We’d decided to go to north Norfolk for a week off from the twenty-first century: no wi-fi, no TV, no motorways, but instead wide open countryside and sea, small uncluttered villages with a parish church worth exploring, market towns, and a night sky unspoilt by light pollution.

The village of Cley-next-the-sea, seen from the nature reserves on the marshland between the village and the sea.

We stayed near South Creake in North Norfolk, in the delightful bed and breakfast accommodation of Sara and Bob Freakley.  Here is the view from their front gate. 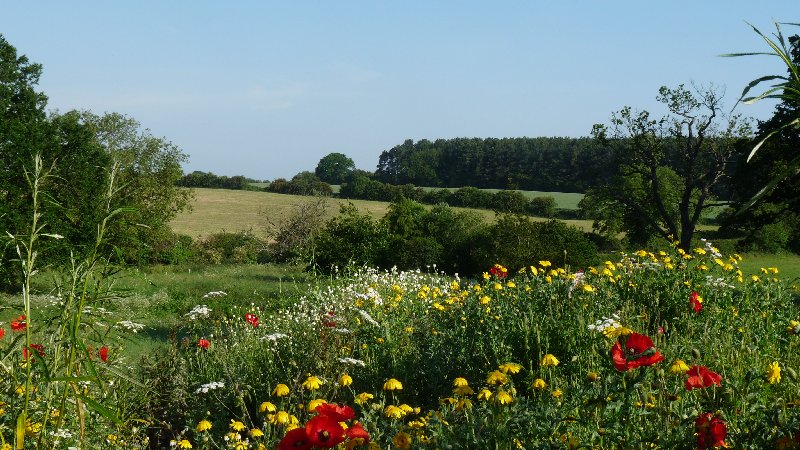 Leicester Meadows: the view from the garden.

You can see that it’s not flat.  It’s quietly, comfortably, gently hilly, with woodland and meadowland nearby.  South Creake is the kind of village where any number of ducks raise their families on the village green. 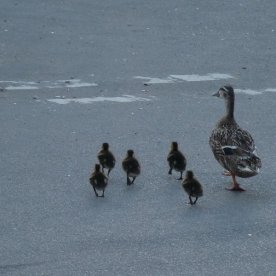 A narrow pathway in Cley-next-the-sea.

And like so many Norfolk villages, it has a grand church far in excess of its apparent needs.  We loved St. Mary’s church, as so many in the area.  Landowners spent money outdoing their neighbours when it came to church commissioning and building.  Get it right, and royalty might come to stay – they never did.  But wooden angels soar among the rafters of splendid wooden-vaulted roofs.  Some churches are tall and stately, others rustic, with flinty walls.  A few have chunky cylindrical towers, because flint doesn’t lend itself to crisply finished corners.

St. Mary’s, Burnham Deepdale, with its Saxon round tower.

A typical tombstone in a typical churchyard.

An angel above our heads at South Creake church. 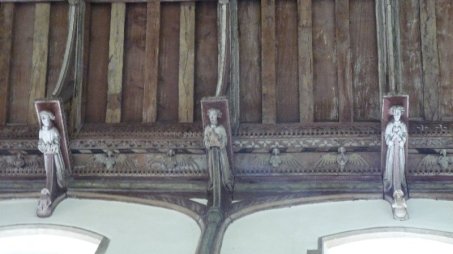 And angels at North Creake church. 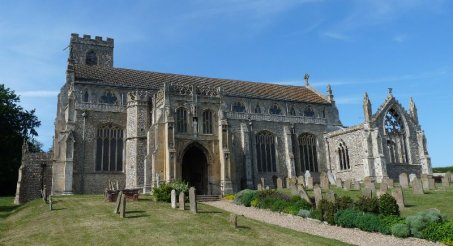 And then there are the stately homes.  Oxburgh Hall – once seen, never forgotten.  It’s a romantic, moated 15th century manor house which almost came to the end of its life in the 1950s.  This was a period when many landowners, crippled by debt,  felt they had no option but to throw in the towel, and dozens of ancient manor houses in Norfolk alone were quite simply pulled down.  The auctioneer charged with disposing of Oxburgh declined to allow the winning bid from someone who wanted only the sturdy roof timbers, proposing to leave the rest of the house to tumble down.  Members of the family came to the rescue, as did the National Trust.  Now it’s one of Norfolk’s best-loved tourist attractions.  Here’s why…. 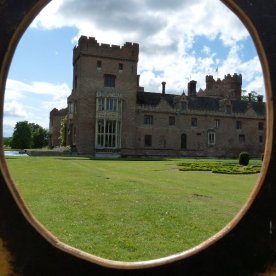 Holkham Hall is overwhelmingly big.  We decided we couldn’t do it justice and confined this visit to its four-acre walled kitchen gardens, with its vines, peach trees, vegetable gardens sufficient, back in the day, to support everyone who lived and worked in this sizeable community.  Many English readers probably remember all about school history lessons featuring Coke of Holkham, early 19th century politician and agricultural reformer, credited with promoting crop rotation and pioneer experiments in sheep and cattle breeding.  Holkham Hall was his home and family seat.

I’d tell you about Peckover House, suggested by friend and fellow-blogger Sharon and her husband Andrew.  But it’s just over the border in Cambridgeshire, so not this time.

And then there’s the sea…and the wildlife.  But I’ve told you about them already.