North Lees, the hamlet after North Stainley, welcomes the Tour.

The final post about le Tour de France.  I promise.  Because  it’s actually over, as far as Yorkshire’s concerned.  And as far as poor old Mark Cavendish is concerned too.

But Saturday was all about Stage One of the Tour.  Up early, I dashed over to the next village, West Tanfield, to buy a paper before the road closed for the day.  Six mini buses were disgorging security guards who immediately took up positions round the streets.  What could be going on?  Later, I found out.  ‘Wills and Kate’ ( the Duke and Duchess of Cambridge to you, please), due to open the Tour at Harewood House between Leeds and Harrogate, were to be helicoptered into West Tanfield at 1.00 o’clock.  Later still, we discovered that my friend Penny was among those who had been presented to the Royal couple – and to Prince Harry too – since her husband’s Chair of the Parish Council there.

West Tanfield would have been a good place to be for other reasons.  The riders swoop down a hill into the village and make a sharp turn over a narrow stone bridge before the long straight run into North Stainley.  So there were vans from radio stations, cranes ready to hoist TV cameras aloft, and would-be spectators galore, already taking their places at prime spots and keeping the local pub and shop busy.

But we’d decided to stay put.  Daughter and family had come over from Bolton and we decided that we should profit from the fact that the Tour actually passed the end of the drive. We sauntered down to the village to the stalls on the cricket pitch, and watched a little of the early action on the big screen in the village hall.  Back home, we spent a happy quarter of an hour chalking ‘Ey up, Laroque’ on the road to greet all our friends in France when the TV cameras passed over.  It worked, as my camera shot of the TV screen proves.  But it only lasted a second and nobody but us saw it. Ah well. 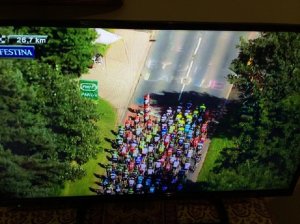 If you’d watched the TV attentively, you’d have seen our greeting.

What we saw though were billboard adverts that appeared for the duration all along the roadside for companies that don’t exist in England – PMU, Carrefour –  and which had already disappeared an hour after the racers had passed through. 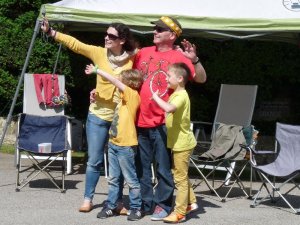 Then, finally …. tour officials in their Skodas…. British police on motorbikes….. French gendarmes on motorbikes….. support vehicles… and the publicity caravan.  It wasn’t as extensive as it had been in France, but there WERE vehicles advertising French companies we don’t have in the UK, as well as British ones too.  The total haul of freebies my grandchildren had thrown towards them consisted of two Skoda sunhats and a key ring.  And then …….. the riders.  Amazingly, after five hours up hill  and down dale they were still riding in a solid phalanx, whirring towards us as a purposeful army.  And then…. they were gone.  Team vehicles loaded up with  spare bikes aloft, more police and ambulance support followed…. and it was over.  For us.  Time to switch on the television and follow the action into Harrogate. 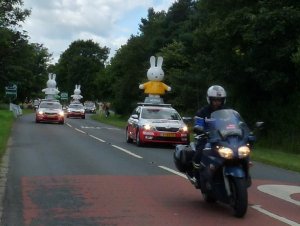 My shockingly bad – and only – photo of the riders passing our gate.

Disappointingly, my crop of Tour photos is exceptionally poor.  So  I’ll focus on a final look at North Stainley, which took the Tour to its heart, and delivered a very special homage to France and the Tour de France.

An early rider on the Tour 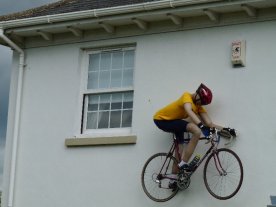 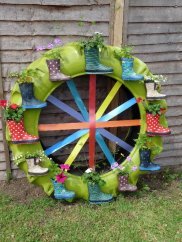 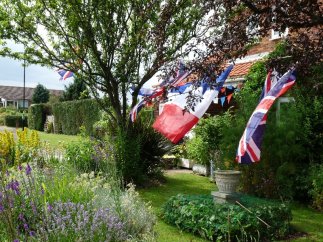 A garden decorated for the occasion 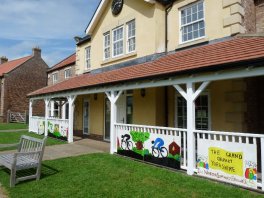 The Brownies decorate the cricket pavilion. 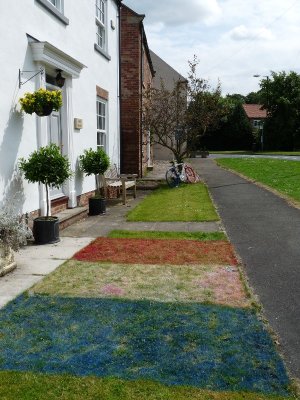 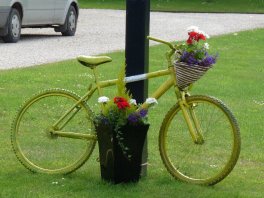 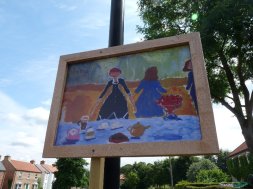 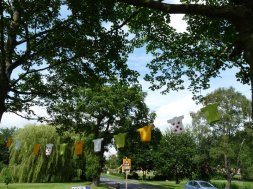 The village had to have a few knitted Tour jerseys too. 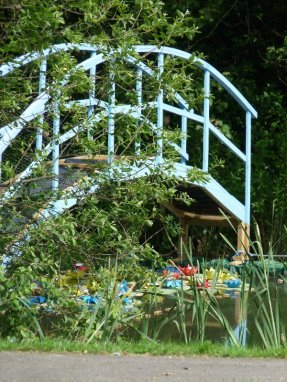 A re-interpretation of Monet’s ‘Waterlilies’ on the village pond.

The church gets in on the act. ‘Le Moulin Jaune’.

One of the banners at the school

North Stainley’s own ‘Man of the Mountains’ house. 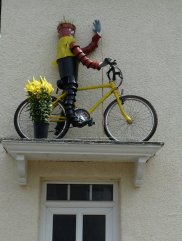 Bill? Ben? Or a TdF cyclist? 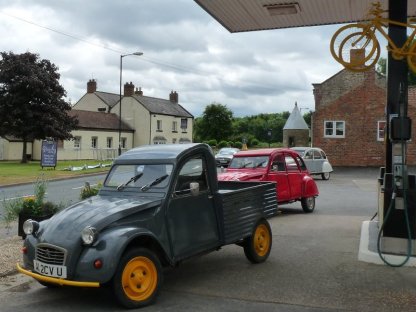 The garage, now closed, has a special display of 2CVs

Another view of the cars.