…  which are, being translated, sloes, rosehips and mushrooms.  But it sounds rather more poetic in French, non?  Even if you take into account that ‘gratte-cul‘ translates as ‘scratch-bum‘, because as every naughty school child knows, rosehips seeds are distressingly itchy when shoved down against the skin.

Anyway, I went off by myself for a walk the other day, starting by the ancient and slightly isolated Chapelle Saint Roch.  There’s still a pilgrimage there every year, because he’s the patron saint of plague victims, and well, you never know, do you?

I’d got several ‘au cas où‘ bags, ‘just in case’ I found sloes, rosehips and mushrooms.  It wasn’t ‘just in case’ really though.  I know exactly where to look for the juiciest sloes, the thorniest rosehips, and even a decent clutch of field mushrooms.  Finding mushrooms before the French get to them counts as a real achievement for me. 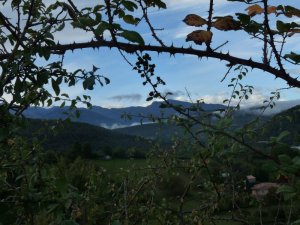 Here are my sloes, destined not for sloe gin this year: we seem to have such a lot left from the last few years.  No, this year I’m making  a richly flavoured jelly with the fruit I picked that morning and a few windfalls. 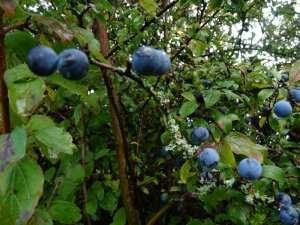 Sloes waiting to be picked

And here are the rosehips.  It’s a syrup for those, I think. 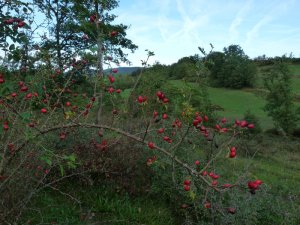 Rosehips with thorns ready for the attack

But the mushrooms……  Someone got there before me.  And it wasn’t a Frenchman .  Grrr.