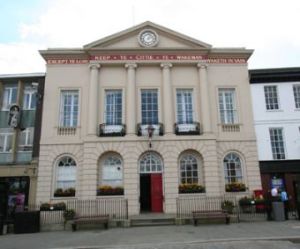 That’s the  verse from the Psalms, inscribed above the town hall in Ripon, where we’re spending the next few weeks to avoid the cold and rain of the south of France (no, really, they’ve got the heating on over there).  It reminds us that every evening – EVERY evening – for well over a thousand years, the Ripon Wakeman has sounded his horn to the 4 corners of the city to announce that all is well.

I had to go and check it out yesterday evening.

Promptly at 9, a smartly dressed individual in buff coloured hunting coat, tricorn hat and white gloves took his place before the obelisk on the Market Square and sounded his horn 4 times, once at each corner of the obelisk – one long mournful note each time.

Then he grinned at us, a small crowd of 20.  ”Want to hear a bit of history?’  Well, of course we did.  He made us introduce ourselves, and we found we too came from, well, about 3 corners of the world: Catalonia, Italy, Australia, even South Shields and Merton.  And here’s some of what he told us:

In 886, Alfred the Great, 37 year-old warrior king, was travelling his kingdom to defeat the Vikings, and to drum up support .  Arriving at the small settlement of Ripon, he liked what he saw and granted a Royal Charter.  He lacked the wherewithal to produce an appropriate document, and so gave a horn which is still safely locked in the town hall.

‘You need to be more vigilant, there are Vikings about’. Alfred warned.  So the people appointed a wakeman to guard the settlement through hours of darkness, and he put that horn to use by sounding it at the 4 corners of the Market Cross to announce that all was well as he began his watch.  The town’s now on its 4th horn.

If you want to know more, our current Wakeman, George Pickles,  has written the whole tale for the BBC website.  It’s a good yarn.  Read it when you have a moment

This is the obelisk the Wakeman visits each evening. It was erected by the then MP, William Aislabie in the 19th century, to commemorate his ….60 years as an MP