Deep in the forest, somewhere near here, vanloads of dastardly Italians are despoiling the woodland floor of every single mushroom.  Some hours later, they’ve driven back across the border to sell their countless kilos of plunder on some Italian market stall.

This tale is a variation of the Great Doryphore Scandal.  Elsewhere in France, doryphores are Colorado beetles.  Here in the Ariège, Doryphores are Toulousains, who used to leave the city at dead of night to strip our fields and woodlands of anything edible, returning home before dawn to stock their own larders – or their market places.

It was our friend and near neighbour M. Baby who told me the tale of those Italians.  We have a great deal of affection and respect for M. and Mme Baby: they’re an elderly couple, very old school, and we’ll never be other than ‘Monsieur’ and ‘Madame’ to them, but they’ve always been very kind to us. Yesterday he reminisced about the secret field where, every year, he used to pick quantities of ceps.  He shook his head regretfully. ‘But I’m too old now.  I can’t get there any more’.  Was he going to tell me, his good neighbour, where to find them?  Not a chance.  His secret will go with him to his grave.

It’s all part of the great Mushroom Mystique here in France.  At this time of year, mushrooms are a hot topic.  The weather’s too dry, too wet, too hot, too cold…. It’s a poor year.  But someone’s always found some somewhere.  And they won’t tell you where. ’Ooh, over near Campredon somewhere’ is as good as it gets.

Notices appear in the papers forbidding the collection of more than 2 kilos on any one day (2 kilos?  I’d be glad of a small basketful).  Landowners have permanent notices forbidding the gathering of mushrooms on their land.

Until now, we’ve had to be content with collecting a few field mushrooms from a rough field just outside Laroque.  Yesterday morning though, Henri arrived.  ‘Get Malcolm.  He’s got to come now.  We’re going mushrooming.’  Malcolm was painting the study – he’d just got stuck in really.  But invitations like this don’t come twice, so he changed into boots and trousers that were even grottier than those he wears for painting, and off they went, baskets and mushroom knives in hand.

Waiting to be gathered....

They returned, nearly 2 hours later, with a large bag of delicate ‘gris’, so fragile that they crumbled delicately as I excitedly unpacked them.  So many!  Thank goodness I remembered  Kalba’s posting on her wonderful blog  Slow Living in the French Pyrénées .  She’d had a mushroom glut too, and wrote about duxelle, made by cooking down slowly a mixture of chopped mushrooms, shallots and herbs until there’s a small amount of a sort of paste that is quite simply, essence of mushroom.  Slow cooking, but worth it. 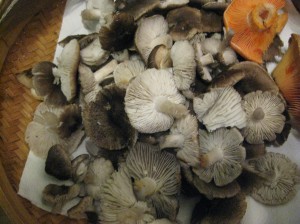 And Henri was prepared to share with Malcolm where he’d found those mushrooms?  We MUST have arrived.