What a doddle it must be to erect a modern high-rise building, compared with the difficulties faced by those builders in mediaeval times. Their churches and cathedrals soar dizzyingly heavenwards without benefit of modern scaffolding kits, cranes and mechanical diggers.

It’s the view of Cádiz shown in the featured photo that prompted thoughts like these. The modern industrial hub is visible from the older city centre. Here’s another view:

Let’s go to London, a city so changed from the days when I lived there in the 1950s and 60s. Here’s a gallery of soaring towers, and the cranes that made building them possible. There are even cranes surrounding St. Paul’s Cathedral. And The London Eye makes a useful picture frame for yet another high-rise office.

And here’s new and old, juxtaposed: from Gherkin to Tower of London

Slightly off-topic, I have to include a few shots from the Gasholder development in Kings Cross. From dirty industrial back streets to desirable address in an imaginative few years.

There’s one cathedral still under construction that’s taking even longer to build than its mediaeval antecedents: La Sagrada Familia in Barcelona. Look.

Did you notice the builder in his hi-viz gear and safety equipment? He’s not the only one who needs to have a head for heights on these modern buildings. Here’s a team of window cleaners in Warsaw:

Tina has invited us, in this week’s Lens-Artists Challenge #173 to choose interesting architecture. I’ve chosen to focus on how the buildings I’ve selected reached such immense heights.

It’s time for Jude’s 2020 Photo Challenge again, and this week, she’s asking us to focus on the vertical.  It’s not surprising that I’m heading for cityscapes on the whole: though not entirely.  I wanted to have something for #15 Squaretops too – so look out for a topsy-turvy image at the bottom of the post.

Here are two riverside skyscrapers: quite similar.  But I like the way that in one – in Seville, on the Guadalquivir – the upward sweeping lines are emphasised by its reflection rippling on the waters beneath: and in the other – in London, on the Thames – it’s the contrast with the blocky cranes that does the job. 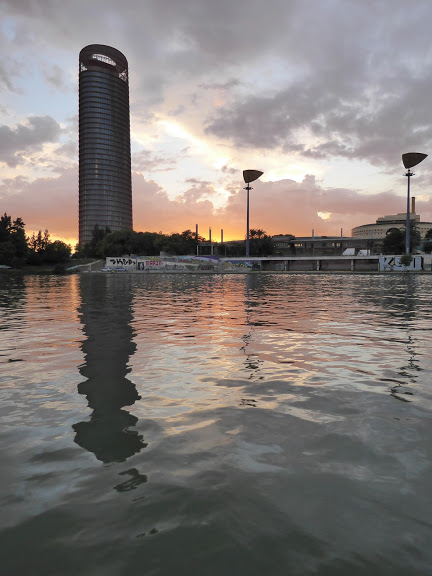 Then I chose a couple from Cádiz.  Palm trees.  In one the tall palms lead your eyes to the – rather small – moon, and in the other, two wayward palms making an impromptu arch contrast with the properly upright trees they’re next to.

And I liked this shot from Warsaw. The vertical lines aren’t all that pronounced, but still lead you up to those precariously perched window cleaners.

Finally, an image (square of course) taken on the Leeds-Liverpool Canal near Gargrave.  Have you noticed it’s upside down? Topsy turvy? That’s the water up above, and the trees and sky down below.