Everyone knows I’m a Christmas Refuser.  Oh, I enjoy Christmas alright.  I made our cake weeks ago, and Malcolm and I regularly ‘feed’ it with doses of brandy to make sure it’s good and sozzled.  I’ll happily rehearse Christmas music at choir too.

But that’s about it.  I do an about turn in any shop belting out Christmas Muzac and leave immediately.  I haven’t bought a single card or present, nor shall I until …. oh…. about the end of next week .  Then it’ll all get done in a flurry of cheerful activity, and I’ll enjoy it, because I haven’t been thinking about it since September.

Then the other day, I came across this six-years-old blog post, written in France.  Simpler times, simpler customs.  I wonder how often the window displays I wrote about here are seen these days? Innocent pleasures…. 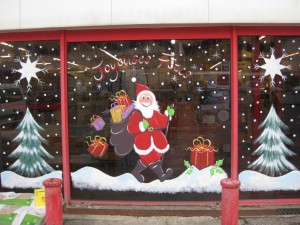 It was 5 years ago when we were first in Laroque round about Christmas time.  There were no signs of its coming until well into December, and we thought it wonderful: no decorations, no adverts, merchandise or muzak,  just a bustle of festive activity from about two or three weeks beforehand.

The first signs, as in England, were in the shops.  Unlike England however, most shopkeepers didn’t usually buy tinsel, baubles, and several packs of cotton wool to introduce a Christmas theme into their window display.  Instead they had a seasonal design applied directly to the window.  We once saw a scene-painter busily decorating a local window, and wondered what he did the rest of the year.  Shops in small town high streets like Laroque’s would all be unified by being the same but different.  The same folksy interpretations of Christmas motifs, the same limited palettes of white, red, greens and yellows.  Some would choose scenes of reindeer amongst the Christmas tree forests, others Father Christmas,  snowmen, or radiant candles.

Five years on, hardly any shopkeepers are keeping up this tradition.  They’re decorating their shops, but in their own way: dressing up their window display with baubles, snowflakes and Santa Claus figures.  They’re nicely done too, but I miss the particularly French idea, which I’ve seen nowhere else.

Here are the few traditional window scenes I’ve been able to find this year.  Maybe next year even these will be part of the past.