This isn’t a great photo. But it’s cleverer than you think. Here is the all-but-full moon, framed by the empty circle at the top of this artificial Christmas tree (universal, apparently, in civic displays throughout Spain) in the centre of Málaga.

We’re here for our last night. Tomorrow, we return to England for the last time as EU citizens. It doesn’t bear thinking about.

But the moon is shining brightly for January Light 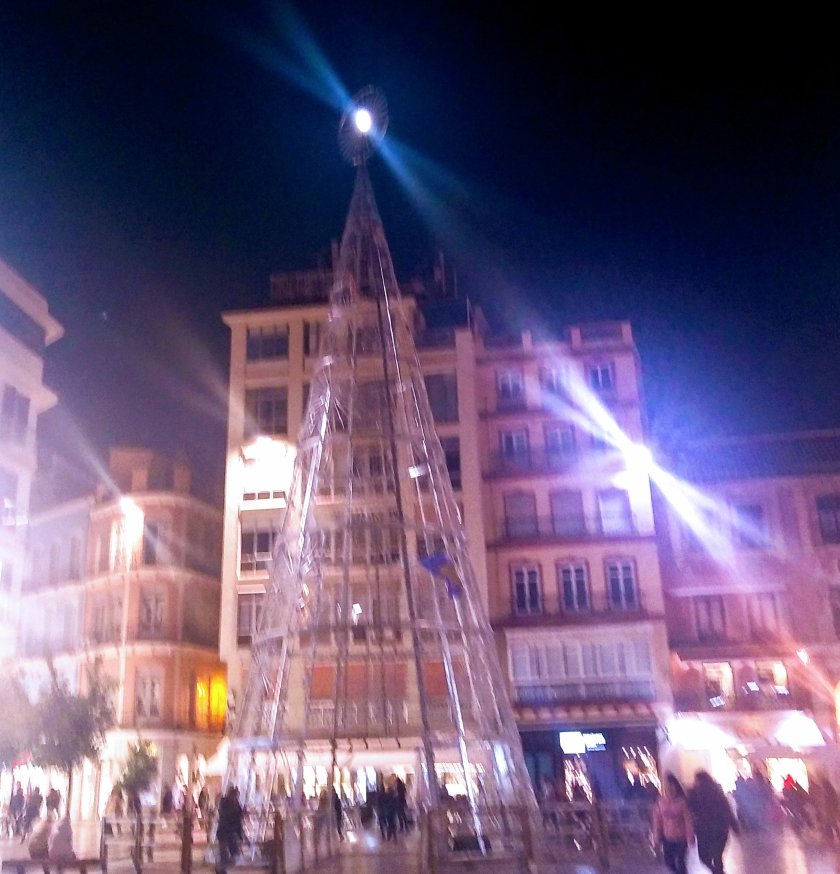 Bright, slight, light – maybe a Bit of a Fright. A puppet from Cádiz. You wanted culture? Wait till I get home and can access all my camera photos. For now, enjoy this little charmer from the Museo del Titere , a delightful little museum all about puppets at the edge of the old town.

We’ve been wandering round Cádiz, Cádiz, Cádiz today. That’s what you call the city if you live in the ancient town. Once names the province, twice the whole city, modern bits and all. Three times, and you lay claim to living in the oldest continuously occupied city in Europe, founded by the Phoenicians in 1100 BC.

Only doesn’t it sound more immediate to say ‘founded by the Syrians and Lebanese’? Because that’s what Phoenicia has become. And Cádiz had its place too in one of the twelve labours of Hercules. It was here that our hero was tasked with separating Europe from Africa. As you know, he succeeded.

We went on a walking tour of the city. How I love these. Local guides love to help you poke your nose into those parts of the town that the guide books don’t reach.

We explored pre-mediaeval Cádiz, the vast fish market and flower market, and got a flavour of La Viña, fishermen’s Cádiz, severely flooded as a consequence of the Lisbon earthquake on November 1st 1755, but now a laid–back, cheerful place to go and party and eat freshly cooked fish caught only hours before.

A bright sight to invite appetite!

Moonlight. Street lights. Reflected lights. The Cathedral of Cádiz in the twilight. 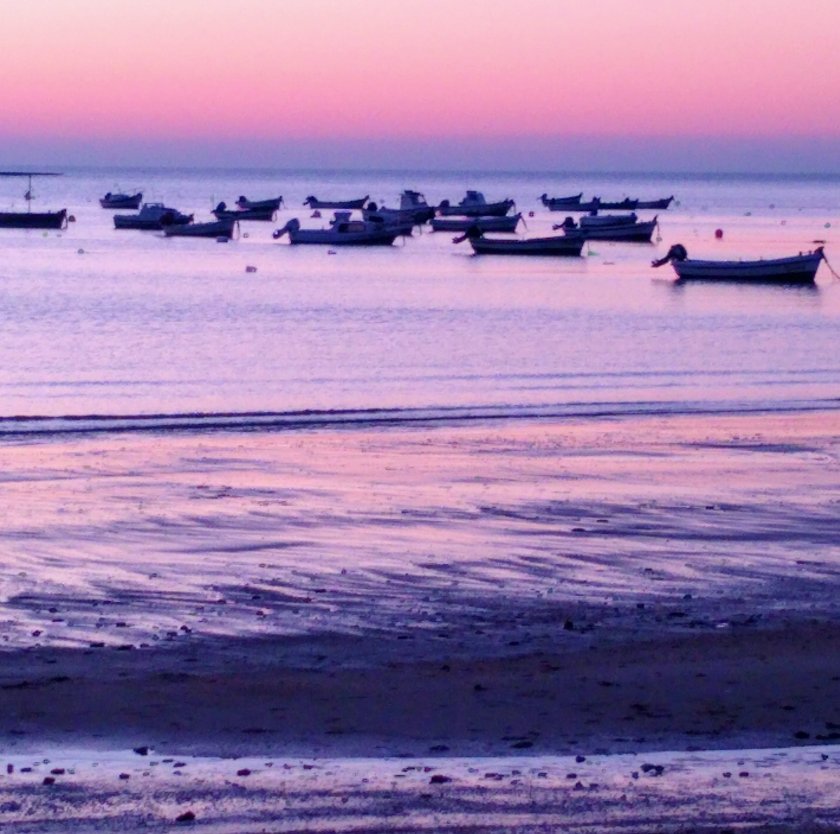 This photo of my daughter’s reaction to her gift may not be filled with yellow light. But it expresses completely the brightness of heart of a day when Malcolm and I, for all our language limitations, once again felt accepted into the heart of this joyous Spanish family.

Tomorrow, the Three Kings who once visited the infant Jesus will be busy delivering gifts to children all over Spain.

Tonight, they are in exhuberant and joyful processions in just about every community in the land. We’ve been to Barcelona’s spectacularly impressive city offering for several years. But those crowds … 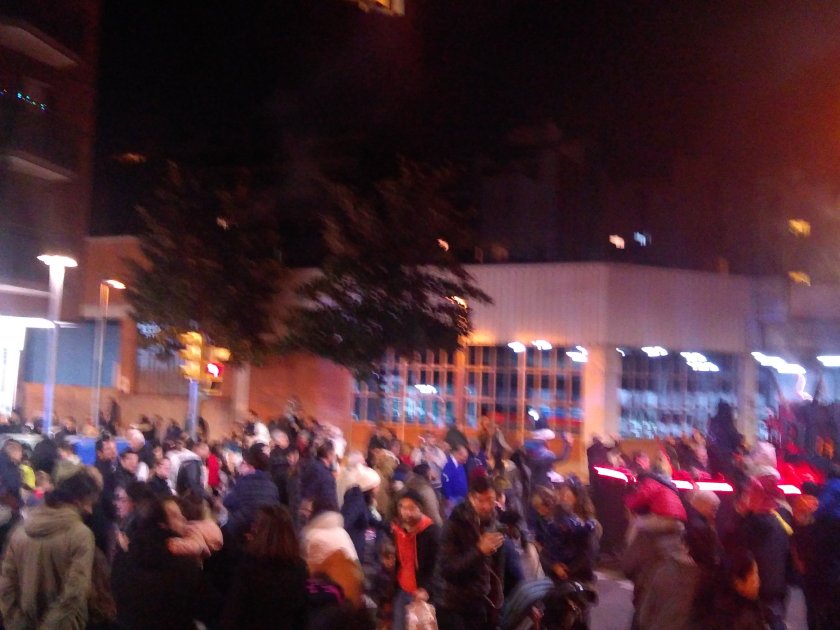 This year, we decided Small is Beautiful. We went to the small community event covering just a handful of streets round Emily and Miquel’s flat. It was cosy, homespun, atmospheric and fun. 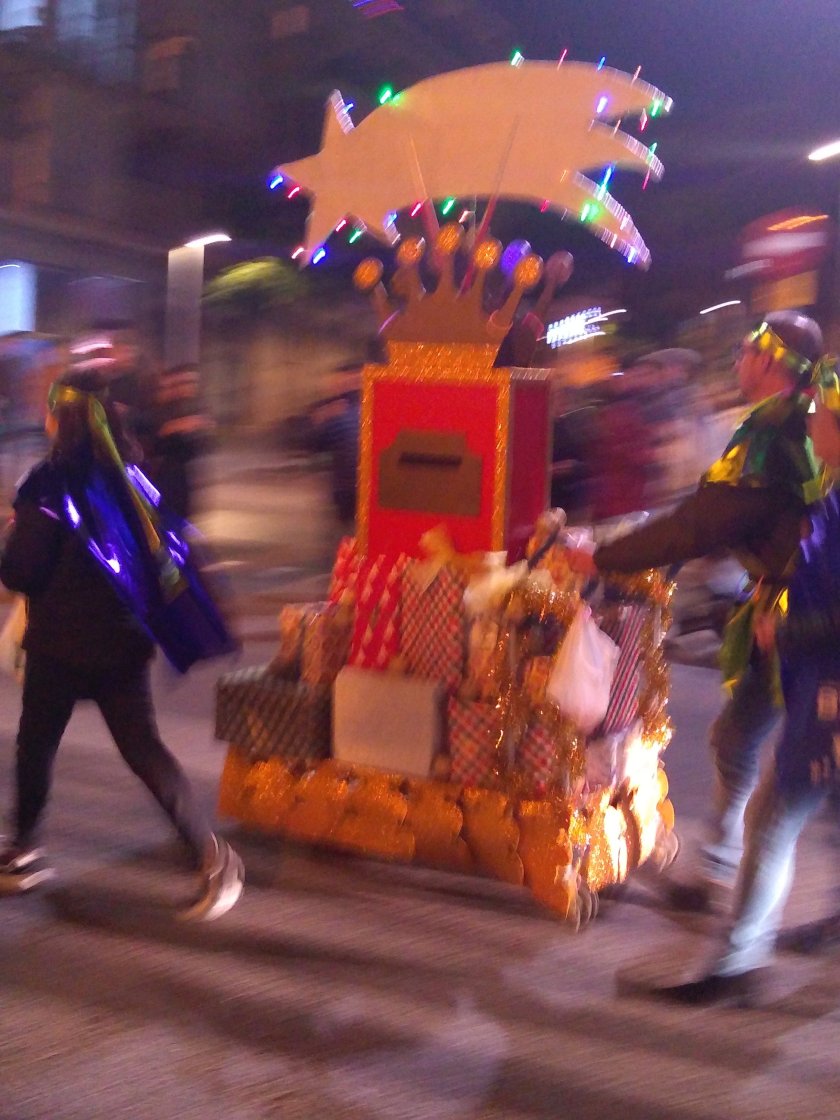 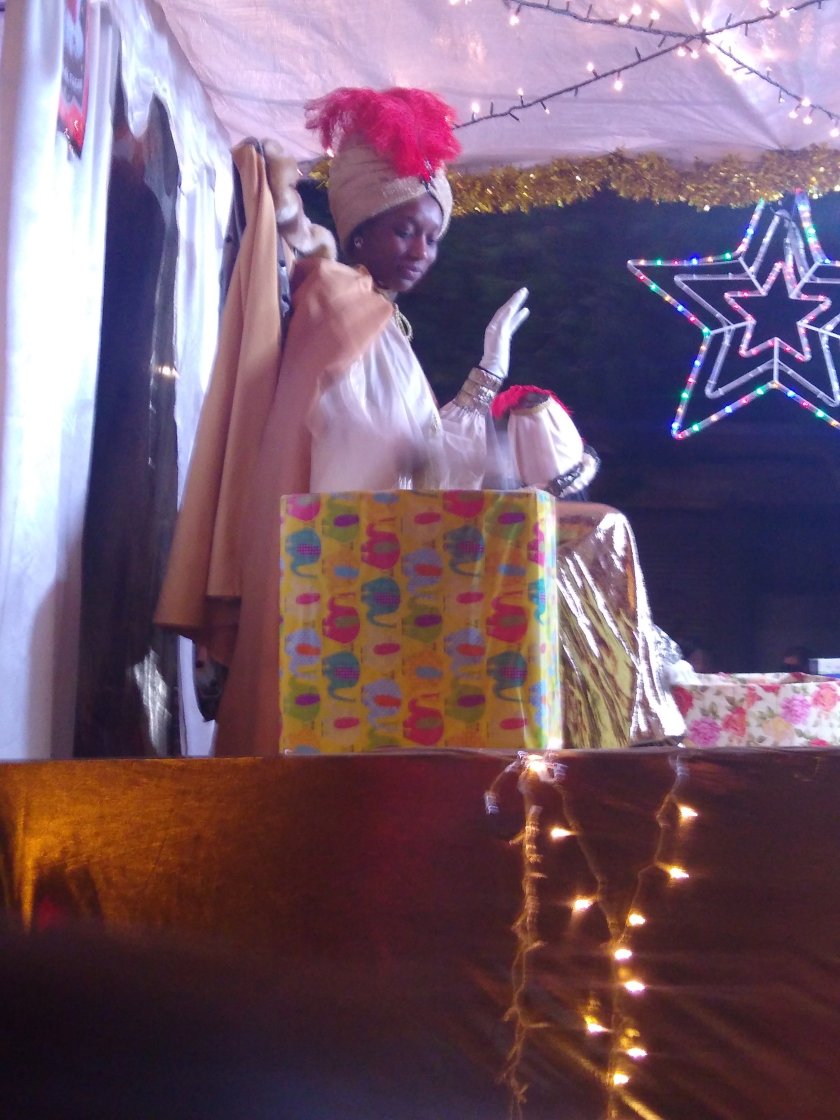 Drummers escorted the kings, dancers too. We worried that Emily’s community wouldn’t be able to deliver King Balthasar, traditionally black. But Queen Balthasar stepped up. There were fire-eaters accompanying a Heath Robinson contraption belching smoke. 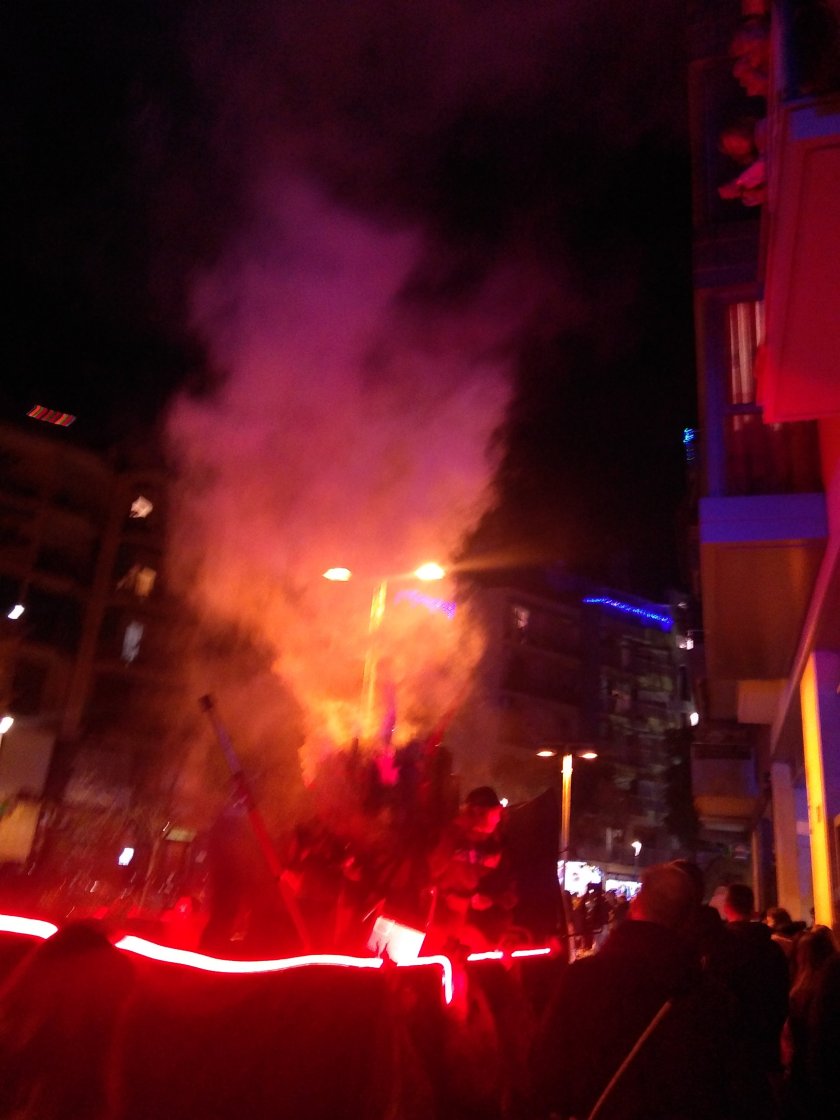 And sweets for anybody who could catch them as eager elves and helpers chucked them from the floats. Even we caught some, before wandering off home, relaxed and cheerful.

You may have realised we’re in Barcelona with Emily and Miquel, looking forward to the Three Kings arriving tomorrow. But yesterday, we left the Big City, caught a slow local train, and trundled off to the foothills of the Pyrenees, to Vic, 45 miles away.

The Romans knew Vic. The bridge they built here is in daily use. There’s a temple too. 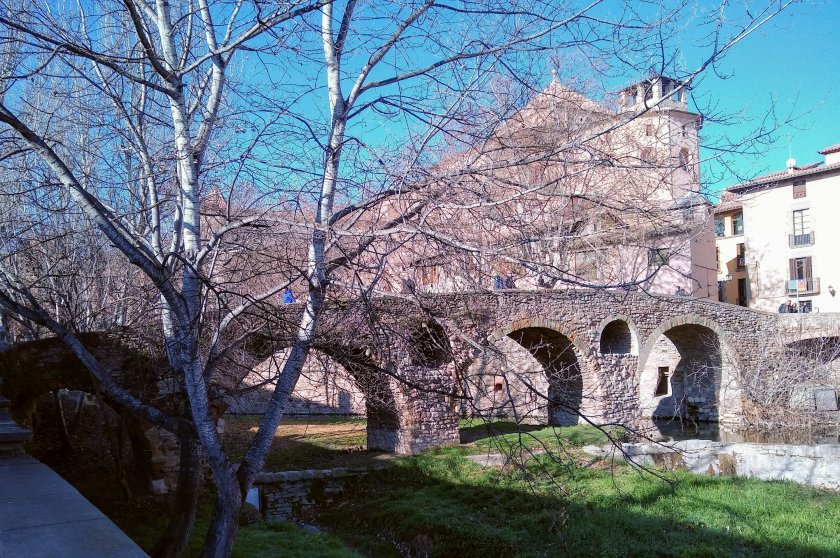 The early Christians knew Vic. An important bishopric was established here, and a seminary, the basis of the present university. It was the most important market town in the area. This was the mediaeval town we’d come to see.

I’ve taken this photo from one of the covered arcades, built tall enough to allow a man on horseback to ride there. Many town doors are big enough to allow this horseman through.

Nowadays, Vic is assertively Catalan. If you look, you’ll see banners on the buildings supporting their political heroes. Slogans are everywhere.

But here is the Olive Tree of Peace. Hang your hopes here. 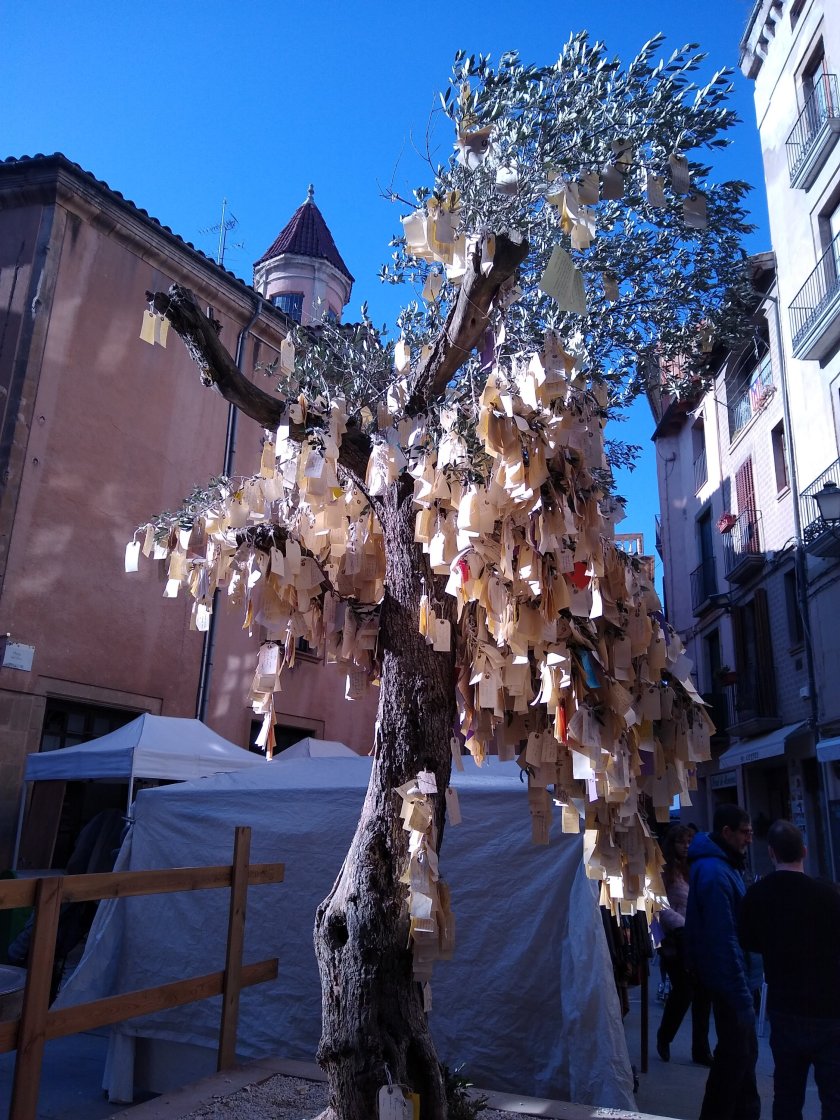 Most of my photos are in my camera. Here are phone snapshots of our walk round this delightful untouristy town, going about its market day business.