The river which moseys along and chatters beyond the back garden is our frequent companion. Whether we’re walking locally, out and about in Ripon, or having a morning in Masham further north, it’ll be keeping us company.

The River Ure is not a mighty river, wide as the sea, becoming ever slower and more stately as it forges its way to the coast. It’s not a super-highway for commercial barges, carrying manufacturing products to and from industrial heartlands. It’s not even a tourist destination, filled with pleasure craft and kayaks. Not far from us, it turns itself into the River Ouse, and even that doesn’t get to the sea, but instead flows into the River Trent, and then the Humber Estuary. So it has no delusions of grandeur.

But it’s our River Ure, home to water birds, otters, herons. We watch it through the seasons, as it surges to dangerously high levels in winter, then diminishes to an idle trickle in summer, exposing boulders and polished stones as venues for family picnics.

I’ve walked different stretches of it this week. Even under lock-down we’re encouraged to take exercise – alone – within reach of home. Put your (virtual) boots on and (virtually) come with me to visit those parts easily reached on foot within an hour or two. We shan’t meet a soul apart from the odd dog-walker, and we’ll shuffle away from each other, afraid these days to get too close.

Our river has refreshed, invigorated and calmed me. It’s been a real friend this week.

Near Mickley, walking through the woods to West Tanfield, the footpath is high above the river, which has to be glimpsed through a screen of flowering sloes.

We’re in West Tanfield now, looking at the village from the ancient bridge.

There’s a campsite not far from our house. This is the sight that greets holiday makers when they arrive.

We’re very near our house here. See how the river eats away, year by year, at the land on the right. In the six years since we’ve been here, it’s moved about 10 feet. 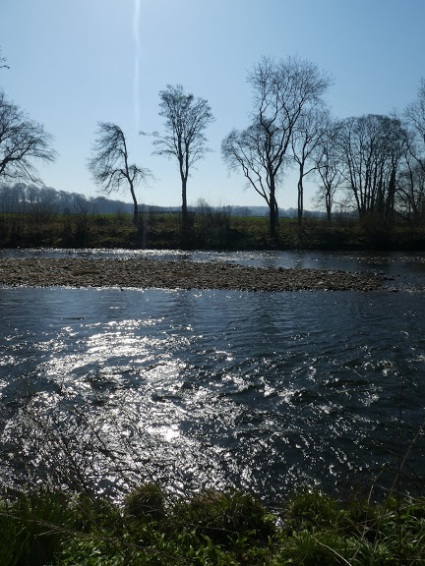 Walking away from West Tanfield on the opposite bank ….

… and towards the woods.

Lens-Artists Photo Challenge #89: A River Runs Through It.

63 thoughts on “The River at the Bottom of the Garden, at the Centre of our Lives”