Pondicherry.  Until 1954, a French Colonial settlement.  I wanted to stay in this most French bit of India, and I wasn’t disappointed.  Only its historic old town built, French style, in a grid pattern retains a Gallic flavour these days, but what fun I had there. 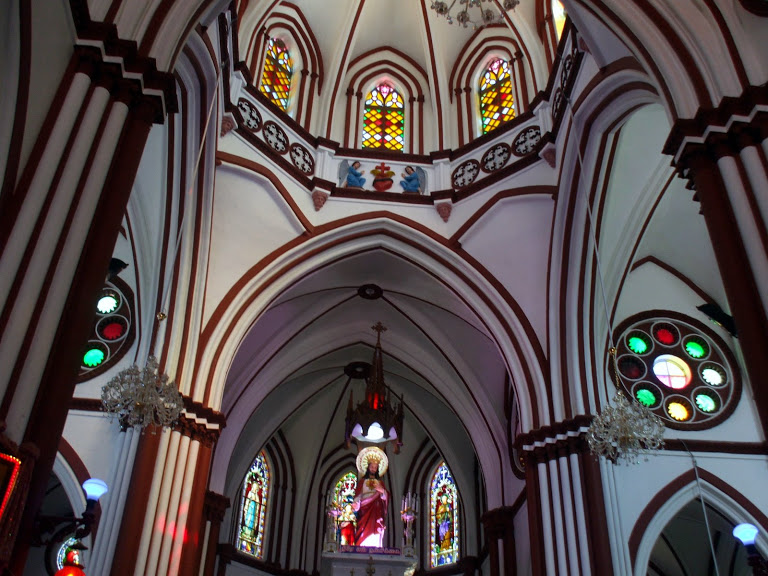 Sacred Heart Church, near where I was staying. A Catholic church in glorious technicolour.

I think Pondicherry remains in my memory as  a haven of peace because -well, it was.  My solo Indian journey was stimulating, exciting, eye -opening: but exhausting.  A solo female traveller had few options for daytime relaxation.  I wasn’t spending my days in tourist Meccas, so there were no coffee shops for me to enjoy simple down-time. Men had their tea shops.  Women – not so much.  Pondicherry provided these, and the shores of the Bay of Bengal. And French patisseries where I discovered the joy of an Indian croissant and a strong shot of coffee as an antidote to spicy fare.  I truly loved my spit-and-sawdust all-you-can-eat-piled-on-a-banana-leaf cafes, but they weren’t places to linger after you’d downed your food.  In Pondicherry I went up-market, without the up-market bills.

I stayed in a hotel called Le Rêve Bleu, and was immediately transported back to the town’s colonial days.  Older staff spoke French, because they would have been taught in French at school.  Sadly, this no longer applies to anyone younger than 55 or so: it’s English now. 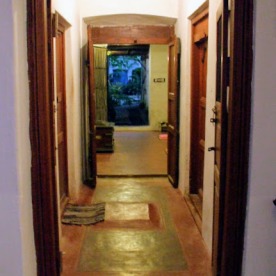 Looking through to the garden.

My balcony at le Rêve Bleu.

Le Rêve Bleu. The view from my room.

Rooms were large and elegantly proportioned, and there was a leafy courtyard.  Christelle, the young and cheerful French owner whizzed me about on her motor bike on shopping sprees to make sure I wasn’t ripped off when choosing the textiles I wanted to take home.  She found me a young local woman who gave me a couple of wonderfully relaxing and rejuvenating massages.  And her male staff cooked up beautifully spicy breakfasts that I ate in that courtyard.  Yet this was a budget hotel.

All the same, I didn’t sleep much there.  My room overlooked a quiet road where from midnight, the female street cleaners would get busy.  They spread themselves over several streets, and shouted conversations to each other.  They’d sit down cross legged on the pavement near my window and chatter during their breaks.  I was charmed by them.  Night birds called.  Dogs fought. At 5.30 there was the Call to Prayer.  At 6.30, the (often female) builders showed up at the building site opposite.  Hopeless really.

A fuzzy night photo of the street cleaners sit in the road and have a nice loud chat in the middle of the road outside le Rêve Bleu at midnight.

Delivery from the Builder’s Yard.

So I’d get up early and go for a walk along the seafront.  I’d look as the schoolchildren piled into rickshaws or onto the backs of bikes arriving  at school.  I’d smile at the policemen in their fine French kepis, and enjoy passing public buildings still signed in French.

The Bay of Bengal.

The journey to school, Indian style.

Children off to school in Pondicherry.

New readers:  This is Chapter Something-or-Other of an occasional series of memories of my month long trip to India in 2007.

30 thoughts on “A little bit of France in India: Pondicherry”