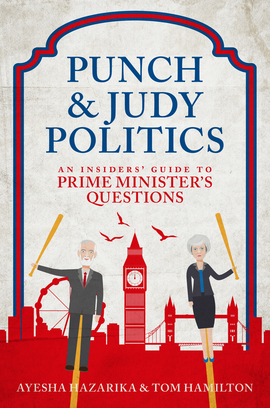 Recently, I promised a post about books that got rave reviews from everyone but me.  And in the end, I haven’t done it.  It turned out there weren’t so many after all.

So instead, I’m going to tell you about a book which I enjoyed, hugely, even though it’s about politics, which I don’t enjoy hugely (Does anybody, anywhere at the moment?).  This is a thoroughly out-of-character read for me.

It’s  Punch and Judy Politics, by Ayesha Hazarika and Tom Hamilton.  And it’s about Prime Ministers’ Question time, that peculiarly British institution when once a week on Wednesdays, the Prime Minister and the Leader of the Opposition face one another across a crowded chamber, filled with heckling, shouting, cheering and far-from-silent MPs.

I was drawn in from the first sentences.‘ You’re the Leader of the Opposition. it’s your job to choose one of the week’s top political news stories and write six questions to the Prime Minister about it. Not exam questions, not questions you might ask an expert, but awkward, hostile questions that will put the Prime Minister on the back foot ….’.

I was immediately interested. This book describes how PMQs play a defining role in British politics. This once-a-week contest between Prime Minister and Opposite Number forces each of the pair not only to prepare well, backed by a team of advisers, but to examine their own policies, and understand where and why they might be weak. Preparing to spar with their opponent, undermining them with clever questions, a wounding joke, an unreturnable rejoinder is an important and time-consuming part of their routine. Some participants have performed well – even extremely well: William Hague, David Cameron and Tony Blair generally rose well to the occasion. Others did not. Ian Duncan Smith never shone, and the current sparring partners, Theresa May and Jeremy Corbyn bring no spark to the event.

Understanding more of this weekly show, and its purpose in building or destroying morale among the troops (the MPs), in providing fodder for the press, and in fine tuning policy has been illuminating.

It’s a thorough, informative and funny account of this peculiarly British institution. Of course I read it enthusiastically: one of the authors, Tom Hamilton, is my son.

Theresa May at PMQs: BBC image

23 thoughts on “Punch and Judy Politics”