It was our Works Outing, our Grand Day Out, our Jolly.  It was a day we volunteers at the National Trust’s Fountains Abbey and Studley Royal had been waiting for: our reward (though not entirely free) for good behaviour over the past few months.  A coach would collect us and deliver us to spend time at two destinations well worth visiting over in East Yorkshire: Sledmere, and Burton Agnes.

Both places belong to – no, not a rival organisation: everyone concerned’s aim is to preserve and enhance our heritage for us, and for future generations – but a different one, the Historic Houses Association.  Both places are visited as much for their gardens as the houses themselves.

Well, just look at this.  This is the view from the coach window.

So much for the gardens then.  A real shame.  Sledmere‘s grounds are extensive, and offer cunningly tweaked panoramas of the surrounding countryside.  They were developed in the late 18th century by Capability Brown, then at the height of his popularity. Apparently unending vistas of manicured countryside, easy on the eye, were what was required.   The local village got in the way of the view?  Easy.  Move it and re-build it.  The villagers will get used to it.

We were able to admire the grounds from the protection of the house, but not so the planted areas, in particular the walled gardens. We favoured a nice cup of coffee and a home-made cake in the cafe instead. We’ll want to go back when the sun is shining.

Sir Christopher busied himself in having his house as well as his garden improved.  The plaster work designed by the celebrated Joseph Rose is said to be the finest in England.

As is the Long Library, extending the length of the building, a long, light-filled and elegant space.

There are curiosities too, such as the Turkish room designed for Sir Mark, 6th Baronet in 1913.  Every surface here is covered in specially designed Armenian tiles.

The house might have disappeared from view in 1911 though.  A catastrophic fire broke out while the 5th Baronet, Sir Tatton Sykes, was dining. He insisted on staying to finish his pudding. But estate workers, farm hands, villagers, children from the local school, anyone and everyone else turned to and dragged out furnishings, pictures, statues, china, carpets, even doors and banisters.  As muscular estate workers struggled out with the monstrously heavy copy of the Belvedere Apollo, the ceiling fell.  And since then, thanks to the detailed plan which survived, the whole thing has been meticulously restored.  You can read all about it here. 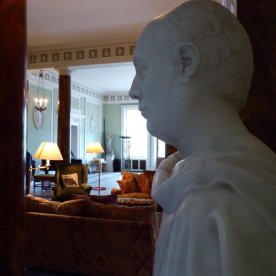 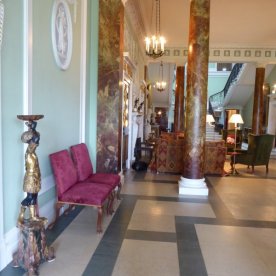 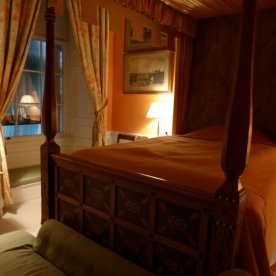 Off to Burton Agnes then.  This Tudor Renaissance hall was built between 1590 and 1610, and has remained within the same family for more than 400 years: the original Manor house was built as long ago as 1173.

It’s a family home, albeit a privileged one.  It’s a home which has been filled with everything from magnificent Jacobean carvings, Impressionist paintings, and more recent artworks.   This is a home that is lived in and loved.  Here’s a quick glimpse of what the visitor can see.  As to the award-winning walled garden, the woodland gardens … well, we didn’t visit those on this particularly soggy day.  We might be British, but we’re not that daft.  The house offered sufficient enjoyment, and the gardens will be there another day. 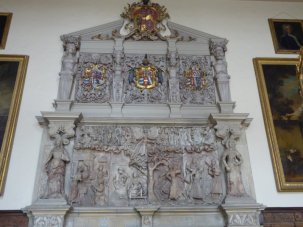 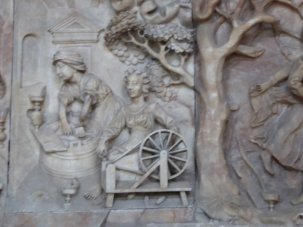 …….and here are the wise virgins. 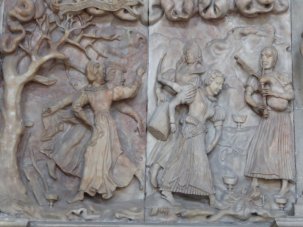 A view of the (also Jacobean) gatehouse from the Hall.

A glimpse at the gardens. 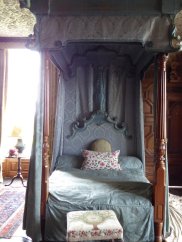 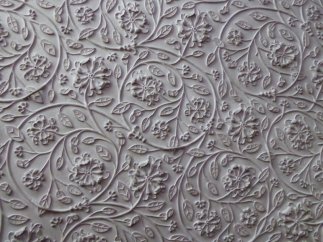 Another glance at the garden, with willow-woven geese.

The gallery, with artworks ancient and modern.

19 thoughts on “The Works Outing”