We’ve just come back from a few days in Florence.  How could I send you picture-postcard views  that are in any way better than ones you’ve seen a thousand times already in art books, travel guides – and postcards ?  Well, I can’t, obviously, so I shan’t even try.  Let me just give you a flavour of the city as it seemed to us for these few days in early June.

We’d gone because I’d had an e-mail offer of cheap fares from a Certain-Irish-Airline-We-All-Love-To-Hate.  I discovered we could get from Leeds-Bradford to Pisa and back, the two of us, for £100.  We booked.  We found a last-minute deal on a hotel in nearby Florence.  We booked. We found we’d chosen well.  Despite being near the station, normally never a great part of town, this place was clean, well-appointed, cheerfully friendly, and within walking distance of almost everything – perfect in fact.  The weather was perfect too.  Sunny, cloud-free, and gradually getting hotter. 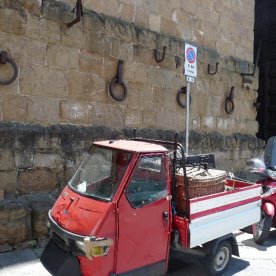 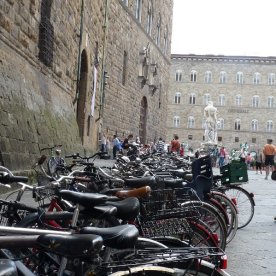 The ubiquitous push-bikes: all parked up on Piazza della Signoria 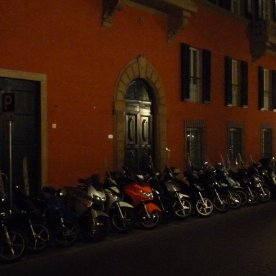 The ubiquitous motor bikes: all parked up for the night.

Malcolm had never been to Florence, but once upon a time, I knew it well.  Once upon a time – more than 45 years ago in fact – I’d had two extended periods in the city working as an au pair between school and university.  I’d had plenty of time to explore the city, and to learn the language.  I’ve had plenty of time in the intervening years to forget both.  In fact a few years ago, when we went to another part of Italy, I found that whenever I opened my mouth to speak Italian, French came tumbling out….

I was pleased, so pleased, that this time, my Italian returned: haltingly at first, but getting better each time I had another go.  A couple of times though, it would have been to my advantage to converse in French – there were French guests at the hotel.  But guess what?  No French words beyond the most basic could be prised from my lips.  I seem to be strictly a one-language-at-a-time sort of person. 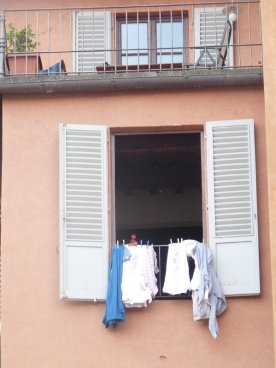 Watching the world go by. 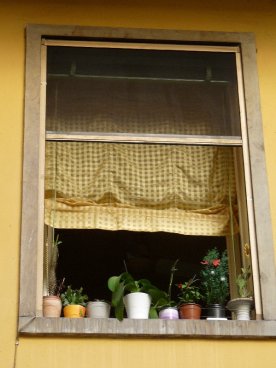 A little window over a little courtyard.

We soon learned that our visit wasn’t going to work as expected.  We’d always planned a mix of visiting some of the tourist hotspots with time at some of the less well-visited sites.  After a chaotic afternoon at the Uffizi, pre-booked at what we had hoped was a quieter time, the hotspots got pretty much junked.

The sheer numbers of visitors and the noise got us down, and my best memories of the Uffizi this time are of those moments spent on the relatively quiet roof terrace, looking down on the Florence skyline.

I wanted to share the Museum of San Marco with Malcolm.  When I was in Florence in the 1960s, this was one of my favourite places.  Back in the mid 1430s, the monk whom we know as Fra Angelico took on the task of painting the cell of each monk with a devotional image: often the Annunciation or Crucifixion.  The monastery, even though now a museum,  is a tranquil place where it’s still possible to be quiet and reflective, and to be moved and inspired by Fra Angelico’s interpretations of the familiar Bible stories .

At first, we had a similar experience at the church of Santa Maria Novella.  But as the morning more on, the crowds increased, and the levels of noise: we were shocked by the difference we noticed between our first moments in the almost-empty church, and the later ones when the building was filled with people busily moving around and talking.

At peace in Santa Maria Novella early in the day. 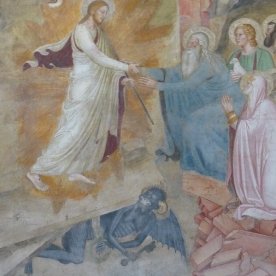 A bucolic scene painted by Uccello in the so-called Green Cloister.

But what’s the point of going to Italy if you don’t spend time enjoying food?  There’s the magnificent Mercato Centrale, where every morning you can join the locals as they buy fruit, vegetables, fish, meat and cured meats and  cheeses.  It’s crowded here too, and vibrantly noisy, but that’s OK.  Get your shopping bag out and join in!

Ham, salami and other cured meats 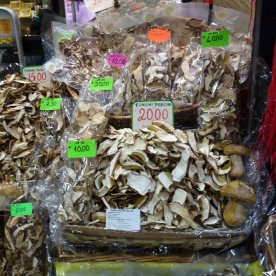 Dried funghi, whole stallsful of them. 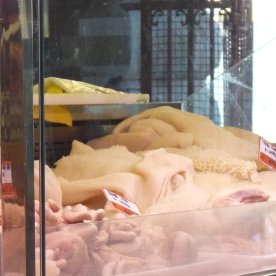 Tripe, much loved by the Florentines. Try it ‘alla Fiorentina’. You might just enjoy it.

Tomatoes, more tomatoes, and so much else….

… and courgettes, often sold with their flowers, because these too are delicious.

And then go over the road to Trattoria Mario for lunch.  It used to feed students and local workers, and now tourists are added into the mix: Not the sort of tourists who expect a watered down ‘typical Italian’ menu, and translated into English or Russian , but ones who are happy to join a table where locals are already tucking into the daily specials.  I was swept into the kitchen to watch the team cooking in an impossibly small space: here’s a photo.  Such fun, and such good food.

Malcolm and another prospective customer inspect the menu.

Another busy lunchtime at Mario’s. 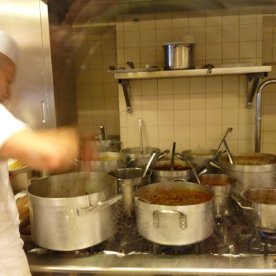 And here’s the kitchen stove.

The next day we headed over to the other side of the river, the Oltrarno, to Porta San Frediano.  This is an area of craftspeople, working people, and strictly no tourists.  And that’s where we found Trattoria Sabatino, and immediately felt at home.  It’s the sort of place we used to like so much in France: simple food, well cooked, and served to local workers in their lunch break.  As in France, the early customers were all men, but later, women, and even children appeared too.

The easy way to haul cement to the top of a building. 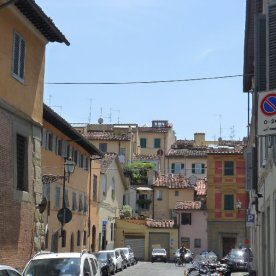 A back street near the church of San Frediano.

Once a church, now a neighbourhood restaurant.

You might think this is simply a 14th century palazzo. In fact it’s teh consulate of Burkina Faso.

We strolled past the Palazzo Pitti, and found these musicians playing to welcome EU delegates to a dinner there. 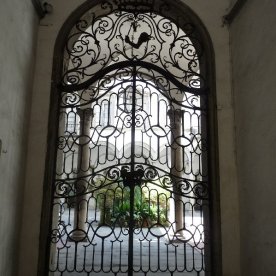 A quiet courtyard in a busy street. 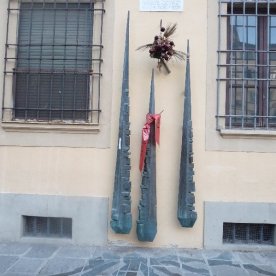 Monument to the Italian Resistance in WWII, in Piazza Santo Spirito.

We spent our evenings on the other side of the river too, opposite Santa Croce.  That’s where we found two bars, the same but different.  Buy a drink in one of these places and it’ll cost you.  But all of a sudden, it seems a good idea after all.  Because trays and trays of food and nibbles appear, and they’re for you, the customers, to eat – and eat – and eat, if you wish, without handing over any more money.

The Ponte Vecchio at dusk. 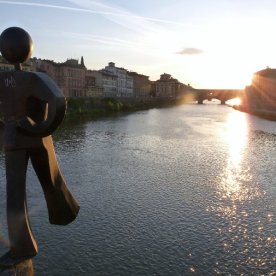 Sunset over the Ponte Vecchio. I don’t know who this fellow is.

Young people at dusk on the Arno. 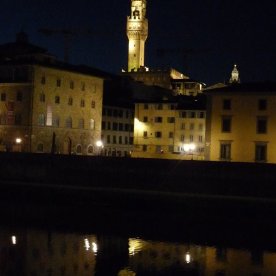 The Palazzo Vecchio at night. 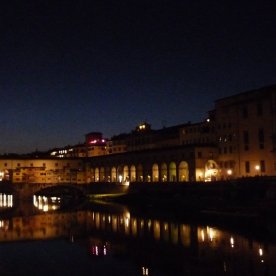 The Uffizi and Ponte Vecchio by night. 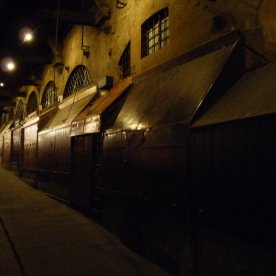 The shops on the Ponte Vecchio all shuttered for the night. 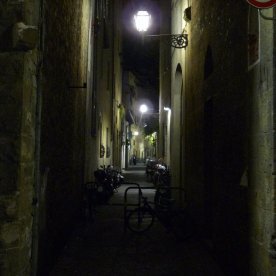 A narrow street leading to the Palazzo Pitti. 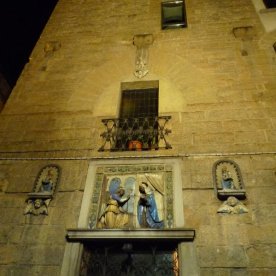 A shrine on a residential building.

Another view of the Palazzo Vecchio.

And of course we spent time exploring those narrow medieval streets, where  tall buildings shelter you from the glare of the sun.  We people-watched in sunny piazzas over shots of strong espresso.  We hung over the parapets of the many bridges over the Arno to enjoy the views and the sunsets.  And the sun became hotter with each passing hour.  We relished nearly every moment of our stay.  But next time, we might go off season.  February might be good.

20 thoughts on “Postcards from Florence”