Pop along to your local butcher round here, and you’ll find pale yellow slabs of something that rather resembles polenta on sale.  It’s millas.  And it resembles polenta because they’re first cousins. Both are made of corn meal cooked into a kind of porridge.  Whereas Italians favour polenta as a base for various savoury dishes, millas is usually served sweet.

And today, we were invited, together with the rest of the Commission du Patrimoine here in Laroque to watch it being made, before sitting down to a millas tea party.  Our hosts were Paul and Aline Garrigue, whose house is a fascinating museum to traditional Ariègeois life, and filled with artefacts from the not-at-all-distant past.  Who’d have guessed that the fearsome collar six inches wide and covered with spikes used to be worn by local dogs to prevent their being savaged in the neck by wolves?  Which of us still has a bread oven built into the side of the fire-place?

A fearsome anti-wolf collar for a dog

By early afternoon, water was set to come to the boil in a huge copper pan set over an open fire.  Various expert fire-makers set to with the bellows, and soon the water was ready for other ingredients.

Getting the fire blazing with bellows.

Milk first.  Then cornmeal, slowly and gently dropped in by hand so that it didn’t go all lumpy.  Then more cornmeal.  A small amount of flour.  Salt.  Duck fat.  Vanilla sugar.  A decent slug of eau de vie.  And all the while, Paul stirred and stirred, with his toudaille.  You could have one of your own if you’d like.  Next year, on Twelfth Night, take your Christmas tree, and cut away almost all its branches, apart from maybe six or seven towards the bottom.  Trim these so they’re just a few inches long.  Strip the bark off and dry the whole thing out.  And there you have it.  A multi-pronged stirring instrument that does the job of a balloon whisk, but on a much larger scale.

You can just about spot the ‘prongs’ of the toudaille.

And still Paul stirred.  He tasted.  Nope, not thick enough.  He stirred some more.  Finally, he pronounced it just right.  A couple of muscular types staggered off with this huge vat of the pale porridgey stuff, and …. tipped it out over a trestle table, covered with a flour-sprinkled cloth.  Then the table itself was tipped, this way and that, so that the millas flowed and settled into a thickish  sheet.  And there it stayed.  It’ll probably still be there till tomorrow morning.  Once it’s good and cold, it can be cut up into slices and …. on to the next stage. 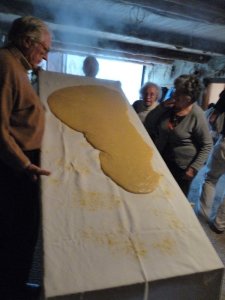 The un-scraped out pan was put back on the fire.  Eau de vie, plenty of it, was added.  Paul set a match to it, and it flamed in the manner of a  good old British Christmas pudding.  We were all issued with a teaspoon, and had a go scraping the pan.  Malcolm and I couldn’t quite manage the enthusiasm of the rest, but it was pleasant enough.

Then it was time for tea .  It was a ‘Here’s one I made earlier’ moment, with yesterday’s millas chilled then grilled, to be served with jam, honey, whatever you fancy.  We decided once more that you have to be Ariègeois to appreciate it.  It doesn’t really taste of a great deal to us.  We had assumed it was a cheap and filling everyday food once upon a time.  But it was particularly associated with this time of year, when families killed their pigs and spent time feasting, cooking and preserving all the meat the pig provides.  Another version of millas, less common now,  uses pig’s blood, in much the same way as in a black pudding.

Nowadays you’ll find millas at every time of year, but in memory of its associations with the pig, it’s the butcher’s shop where you’ll need to look.

We weren’t converted to millas eating,  but watching the stuff being made, and sharing the moment with people who had so much to tell us about this traditional treat was a wonderful way to spend a wet Saturday afternoon.

Nothing to do with millas. A charming detail from the embroidered smoke screen above the chimney breast.