Our Chorale at Laroque’s best friend is the Chorale at Mirepoix.  The Écoles de Musique in each town are best friends too, working together and running some joint classes and performances.

The chorales and other classes get together at least once every season to enjoy singing and playing for and with each other for an evening.  The public’s invited, and comes in encouragingly large numbers.

Last Friday, all the singers started wandering in shortly after 6, carrying carefully prepared dishes of buffet food.  The instructions were to bring no more than 6 portions, but nobody took any notice of that.  Robert from Laroque had made a pile of his deliciously chewy signature cannelés, Mirepoix’s William (yup, William’s a perfectly good French name) produced meringues, Mercedes’ plate was full of the cold meats and pâtés they make their charcuterie….and so on.

The rehearsal started, and was less a question of running through the songs than organising the logistics of moving around the dozens of us involved: Mirepoix’s orchestra, their children’s choir, the adult choirs from both towns.  It had to be done to a time-table, because nobody wanted to hurry over eating that buffet or sinking some wine.  ‘Don’t drink too much alcohol beforehand!’ urged Vanessa, our director ‘It’s bad for your singing voice’. I didn’t see anyone taking very much notice. ’Well really’, said Robert ‘How can you possibly eat cheese without a glass of wine to help it down?’

It had been more than 30 degrees for much of the day, so nobody wanted to come back indoors after the meal.  But we opened the windows, finished our preparations, and the audience drifted in for….oh, well before 9.10 for a 9.00 start.

The orchestra started things off.  Lots of percussion. All good stuff. I’m always a soft touch for children singing: these were well-rehearsed and sang with verve and enthusiasm.  Joined by the Mirepoix adult choir, they belted out numbers that were old favourites to the French audience and unknown to Malcolm and me. 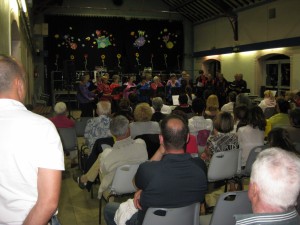 Nearly the end. Time for all the singers to join together for two final numbers.  A few weeks ago, Mireille had spent half an afternoon explaining one of them, Mistral Gagnant, to me.  It features a man singing to his daughter and the allusions to a host of sweets that form no part of my own youth – carambars, minthos and the mistrals gagnants themselves, had left me totally baffled, though not the rest of the audience.