Last Sunday, we went off as usual with our walking group, Rando de l’Aubo.  We went a mere 20 km eastwards into the neighbouring Aude.  What a difference a few miles makes.  The rugged forests, with hillside pasture for cattle and sheep, fields of maize and feed crops in our own department are exchanged for an almost Tuscan landscape, with little hillside towns overlooking ranks and ranks of vineyards delineating the contours.  Both departments are lovely, but we hicks from the Ariège tend to prefer our less manicured and somewhat wilder countryside 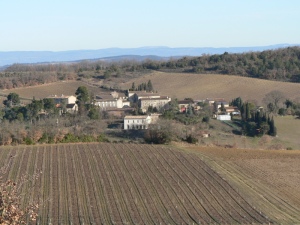 Still, Sunday’s walk was quite a sentimental journey for Malcolm and for me, because we walked through the village, Ferran, that was our first introduction to this part of the world.

A few years ago, an old friend of Malcolm’s sent him an email.  In his letter, he said that it was February, and he’d been sitting outside in his shirtsleeves, gazing out at his perennial view of the distant Pyrenees, at that time covered with bluish-white snow.  Did we fancy a visit to him in Ferran?  We did.  We were of course seduced by those hillside towns, those vineyards, and especially by those views of the Pyrenees.  Not too long after, we came over again, to house hunt, and of course didn’t find that elusive, perfect spot.  Only after we’d returned home did our friend’s wife, who’s an estate agent, spot the possibility that we just might like the butcher’s house in Laroque where we now live.

It was crazy really. We bought it without really knowing the first thing about the area.  But we’ve never regretted it.  We’ll never finish exploring the hillside pathways, always deeply mulched with fallen oak and beech leaves, or the craggier routes up mountainsides, or the gently undulating lower paths through meadowlands, bright with orchids and other flowers, as well as butterflies, throughout the spring and summer.

But that’s the Ariège.  Ferran and the other villages we skirted last Sunday are typical of the Aude.  Colour washed houses and farms in shades of barley, corn and almond perch high on the hillside, looking down over their vineyards, and beyond – one way to the Montagne Noire, the other to the Pyrenees.  The hills roll away into the distance, not so blanketed by forest as our hills are, but at this time of year, green and lush. Though we only walked about 13 km, by the end we were exhausted, because throughout the day we’d been buffeted by the winds for which the Aude is known. But how lucky we are to have two such very different kinds of countryside within such easy reach of our homes.

St. Barthelemy seen from near Ferran

As I’m still camera-less, thanks to Jean-Noël, Michel and Anny for letting me use their photos from this walk, and a recent one near Donazac, also in the Aude

9 thoughts on “A walk in the Aude”