Once upon a time – though not very long ago, Laroque,  population more or less 2000, had dozens of shops. You could live your life here without ever needing to leave town, and many people did just that.

Now we have three butchers, three bakers, and three – no, not candlestick makers – hairdressers.  We have one épicerie left, 2 tabacs, a flower shop, and a new haberdashery store. There are six bars, restaurants and take-aways, and you can still buy paint, bikes, second-hand books, even a washing machine in town.  Greater mobility and the rise of the supermarket have put paid to the habits of the old days, and we’re lucky to have as many shops as this left.  But so many are no longer open for business, and our home is one of them.

From the early years of the 20th century until about 25 years ago, our house was Paul Vergé’s butcher’s shop, as well his family’s home – people here still refer to it as ‘l’ancienne boucherie’.  Passers by, workmen who come to the house, delivery staff  – all of whom remember coming to the shop as children, or working there as part time or weekend staff –  have told us tales about the old shop, and the house itself is giving up some of its secrets…….

The butchery business must have been back-breakingly hard.  After we’d moved in, we soon realised that carcasses were hauled up through the house to the top (or second) floor up a now filled-in shaft, where they hung from racks like clothes on an airer.  We wondered why broken bottles were suspended above these rails, upside down.  Answer: to prevent rats and mice running down onto the meat…

This floor of the house, without insulation, was bitingly cold in winter, but suffocatingly hot on summer days.  People have told us that their memories of the shop include seeing these same carcasses, after they’d been hauled down again from the attic, hanging outside the shop door, crawling with flies, just waiting for customers to come and buy…..

The attic also has an area that was used as a smoke room for smoking cuts of meat.  Hard to imagine that the pungent smells didn’t penetrate the rest of the house.

Our garage, next to what was originally the shop, has quite a few sturdy metal rings set into the walls.  Animals were tied to these, prior to being shot and butchered by Mr. Vergé himself.  Occasionally, a terrified beast would get away, and charge up the hill to Place de la Cabanette, where with any luck it would be rounded up by the sapeurs pompiers (fire and rescue service).  An early job, when we moved here, was to line and paint the garage ceiling – to eliminate all the blood stains from this domestic abattoir.

We still have 2 enormous ex-cold rooms just off the shop.  One of these is now a tool storage area, one a larder.  We haven’t parted yet with the big old scales which were part of everyday life in the shop.

And then there’s the white-tiled shop, now a games room. The Vergés,in common with most shopkeepers, provided a few hard chairs for the comfort of those waiting or gossiping in the shop.  Mr. Vergé was convivial, a lady’s man who enjoyed chatting to his female customers.  Madame Vergé was busy in her little booth (remember those?) accepting payments and keeping the books.  Her responsibilities didn’t end there.  In the immense boiler in the kitchen, she made and canned patés of pork, duck and goose liver, rabbit, game; cassoulets; jarret de porc,  for sale in the shop, day after day after day.  We still have boxes of unused labels lurking in boxes in the workshop.

Besides all this, they found time to look after the garden, 2 minutes walk from our house.  Just as they did, I grow vegetables: like them, I use the cherries, plums, apricots, figs, grapes from the trees there.  Unlike them, I can take my time to enjoy digging, planting, harvesting, bottling, preserving, cooking.  Frankly, I’m playing at it.  For them, the hard work of looking after a plot so much larger than a couple of allotments was something that had to be fitted in after they’d slaved away at the butchery business.  And they had a family…. 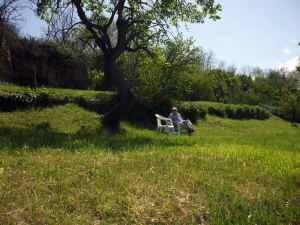 Not working hard in the garden today……

One thought on “The Butchery Business”